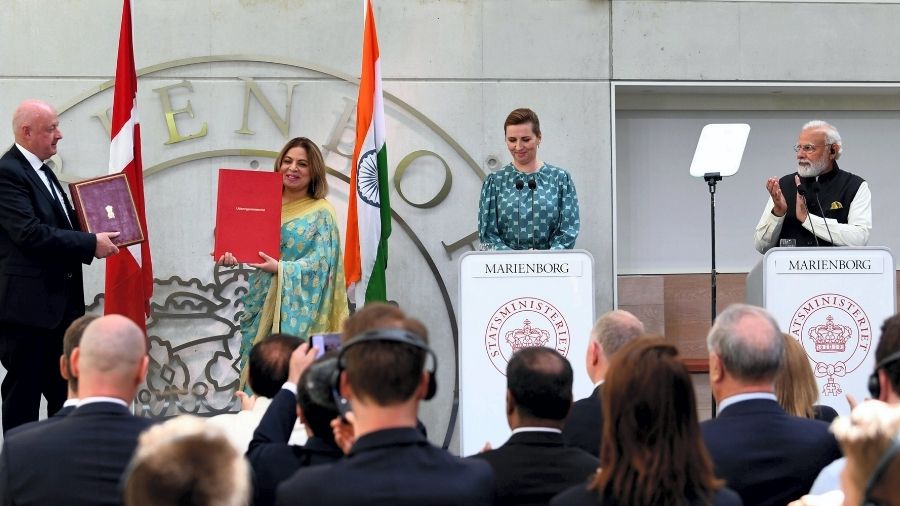 Prime Minister Narendra Modi on Tuesday said it is the "inclusiveness and cultural diversity" that powers the Indian community to feel alive in every moment and these values have developed within Indians for thousands of years.

Addressing the Indian community settled in Denmark during his visit to the Nordic nation, Modi also said that all Indians stand together for the defense of the nation and join hands in the nation-building.

"Inclusiveness and cultural diversity is the power of the Indian community, which makes us all feel alive every moment. Thousands of years of time have developed these values within us," Modi said during his address.

Amid chants of 'Modi, Modi' and 'Modi hai to mumkin hai', in the auditorium with his Danish counterpart sitting in the front row, the prime minister also said that an Indian, wherever he goes in the world, contributes sincerely for 'karmabhoomi' (land of work), for that country.

"Prime Minister Frederickson being here today is a testament to the love and respect he has for Indians," he said.

"Many times when I meet world leaders, they proudly tell me about the achievements of the Indian community settled in their countries," the prime minister added, while noting that the number of Indians settled abroad was higher than entire population of some countries.

"The discussions I had with them today will give new strength, new energy to the relations between the two countries," he added. Modi noted that due to Corona, everyone's life was going on in a virtual mode for a long time. "As soon as the movement became possible last year, Prime Minister Frederickson was the first Head of Government whom we had the opportunity to welcome to India," he recalled.

"This shows the growing relations between India and Denmark," he said.

"Whatever be the language, but we all have Indian culture. Our food plate changes, our taste changes. But the Indian way of repeatedly pleading with affection does not change," Modi said.

"We stand together for the defense of the nation and join hands in the nation-building," he added.

Invest in India, don't miss out: Modi in Denmark