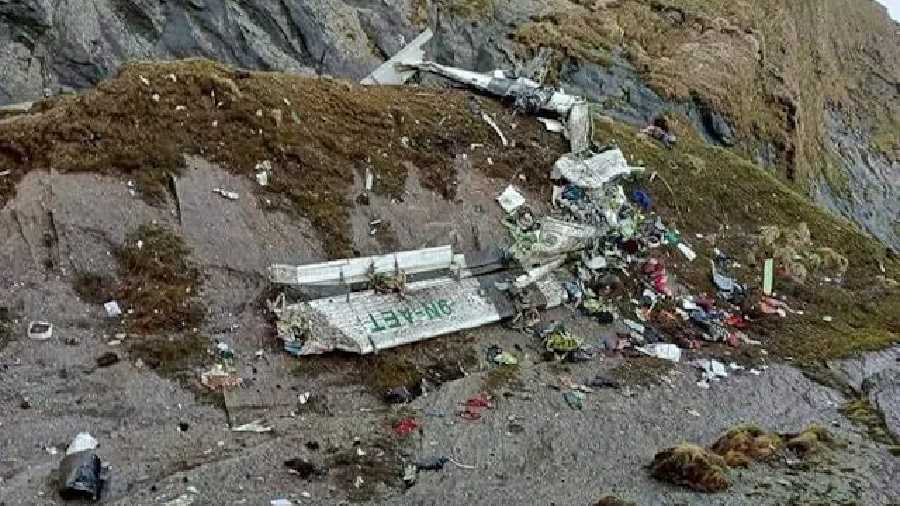 This picture shows wreckage of a plane in a gorge in Sanosware in Mustang district close to the mountain town of Jomsom, west of Kathmandu
PTI picture
Our Bureau, PTI   |   Kathmandu   |   Published 30.05.22, 06:59 PM

Inclement weather was the reason behind the crash of the Tara Air plane in Nepal's mountainous Mustang district on Sunday with 22 people on board, including four Indians, according to a preliminary investigation carried out by the Civil Aviation Authority of Nepal (CAAN).

The Canadian-built turboprop Twin Otter 9N-AET plane went missing on Sunday morning in the mountainous region of Nepal minutes after taking off from the tourist city of Pokhara.

The plane was carrying four Indians, two Germans and 13 Nepali passengers, besides a three-member Nepali crew.

The government has formed a five-member commission of inquiry headed by senior aeronautical engineer Ratish Chandra Lal Suman to find out the cause of the Tara Air plane crash, officials said.

Preliminary investigation revealed that the aircraft had crashed into the mountains after it swerved to the right, instead of turning to the left due to inclement weather, CAAN Director-General Pradeep Adhikari said during a meeting of the International Committee of the Parliament on Monday.

The wreckage of the airplane was found on Monday morning at the Sanusare cliff at Thasang rural municipality-2 of Mustang district.

The crash site is situated at a distance of eight nautical miles from the Jomsom Airport.

Rescuers have so far pulled out 20 bodies from the wreckage of the crashed plane.