Advertisement
Home / India / In the middle of end game of fascism

In the middle of end game of fascism

The telltale characteristics and how we compare against the different stages 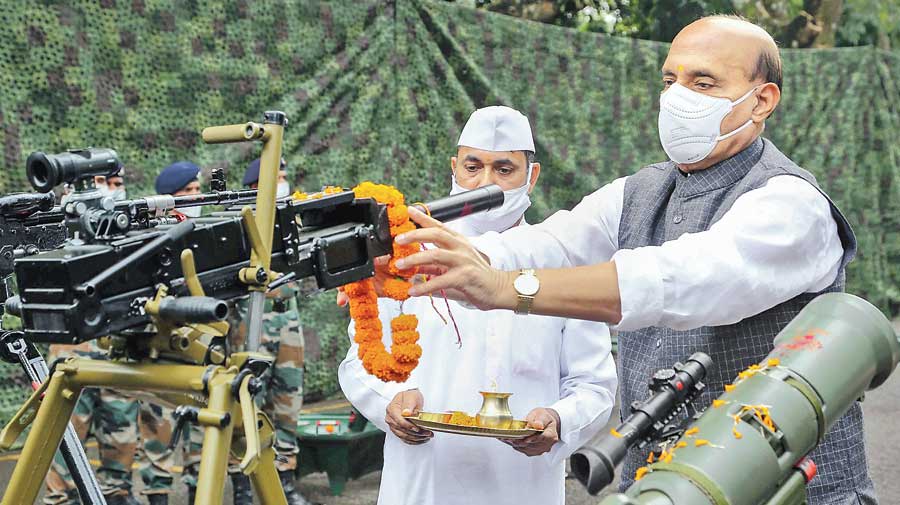 She woke up from her nightmare in a stupor. She had not recognised the shape of the beast. She was not even sure whether she was inside or outside its belly. She sat up, drank some water, still felt shaken and called her best friend in the middle of the night.

“Don’t worry,” came the answer from the other side. “This beast of yours is like the polluted air you breathe. You get used to it.”

Indeed, when fascism creeps in, it is like polluted air. When it is on the rampage you might vaguely recognise its grotesque shape, but by then the end game is approaching and you are in its belly.

Recognising early the symptoms of fascism is a compulsion of our time.

Since Plato we know that the essence of a thing is not encountered in reality. You do not see a perfect circle or a perfect democracy, nor encounter textbook fascism for that matter in the real world. Yet its shape is revealed through some of its idealised characteristics. And then we begin to establish connections between these idealised mental constructions, like the possible connection between a real-world, imperfect fascism and a real-world, imperfect democracy. With these connections reality is approximated in its multi-faceted complexity. We recognise the beast is on the prowl.

Accordingly, our first step should be to identify some essential political, social and economic characteristics of fascism and in the next step examine their interconnections.

Perhaps its commonest political manifestation is muscular nationalism through the display of the military might of the nation in defence against the enemies of the nation. The enemy may be external or internal. To be able to present it as a plot in which external and internal enemies are conspiring together to undermine “our” nationalism is the most effective in so far as it kills two birds at the same time, justifying internal suppression as well as jingoism against the external enemy.

It works like a drug-induced euphoria to stimulate people to follow the leader. The people are informed that the situation is war-like and it’s not the time to raise small disputes. All problems such as unemployment, inflation, crime, environmental degradation and huge frauds on banks can wait for resolution later. The war is usually not quite there but the nation, according to the leader, is getting all prepared. Amid the mimicking of this war-like emergency, it becomes a patriotic duty to express unreserved admiration for war heroes who get “martyred”, mostly in policy-induced skirmishes.

While the nation state as the political unit makes nationalism the inescapable language of all politics, simulating a war-like emergency situation in the name of national security to define patriotic duty against external and internal enemies of “our” nationalism is a typical characteristic of fascism. And, fascist tendencies advance most rapidly if the enemy can be given the identity of a minority religious or ethnic group, refugees with a different tradition, etc. State-sponsored animosity and hatred are directed against those seen as working against the traditions that hold the nation together.

The cult of, and respect for, “our” tradition as opposed to modernism appears as a defining feature, and yet it raises a contradiction. Fascist regimes with their display of muscular nationalism cannot do without military technology and the propaganda machinery of the digital age. Modern technology, especially in defence and propaganda, has to co-exist with the anti-modernism of tradition with respect to caste, gender, religion and race as an unmistakable sign of fascist thinking.

Since the media has a decisive role in propagating the ideology and simulating the war situation, the contradiction becomes deeper. The leader has to encourage modern methods of digital mass communication as a weapon of mass destruction of intelligence and awareness among the people. For any outsider this might almost be a psychedelic experience, seeing a political leader doing a traditional puja of the latest military equipment in one image, and in the next image holding forth in front of a captive audience of practising scientists on how much more advanced our ancient science and technology was.

News is not only manufactured but also filtered, through a mostly self-imposed censorship. This requires making as invisible as possible all inconvenient “small” news like unemployment, farmers’ distress, caste, race killings or rape that adversely affects the climate of mobilisation for nationalism.

The faking of news is done both by commission and omission. “Never have so many been manipulated so much by so few,” in Aldous Huxley’s words parodying Winston Churchill (Brave New World Revisited, London, Vintage Books, 1994; p 27). The dissenting opinions that might still exist are taken care of through stringent laws meant to prevent unlawful, anti-national activities and thoughts.

All attempts are made politically and socially to make the state more powerful in a simulated war-like emergency that ruthlessly represses dissent. This requires making the media, judiciary and educational and other supposedly autonomous institutions as pliable as possible. And yet, an unavoidable economic dilemma appears on the economic front. If the state taxes too much its populist image suffers. If it targets mostly the rich they would turn against it; instead, big business can be induced to serve a big government for a suitable price. Thus the government is expected to deliver endless speeches of sympathy for the poor with some tokenism of help, but the real arrangement is to provide all possible incentives, including cheap natural resources and lucrative contracts, to big business to become bigger.

Since big business requires concentration in its hand of several lines of diversified large-scale production, big business depends on big government. A small government with a free market is a myth that hides the fact that fascism cannot work with small business in agriculture, industry or services.

Big business, in return, supports a big government with its money power in a symbiotic relationship. And, if popular discontent grows, the power of the big government, nurtured in the name of national interest, can be turned against the people. “Our” nationalism against an outside enemy becomes extremely handy for surveillance and the suppression of internal dissent

These essential political, social and economic aspects can be combined in many variations in an attempt to define and redefine the shape of the beast called fascism. And yet it would be a misleading oversimplification. Because the Platonic essential characteristics are not unchanging or, as Aristotle would have it, real-life things have “potentials” such as a little seed may grow into a huge tree. This “potential” for change, especially in the biological world and society, is not captured by unchanging pure forms. These changing forms can be thought of as a series of related “language games” of the philosopher Wittgenstein; each has its own rules of communication in a specific context and yet they bear a “family resemblance” connected by language as an evolving life form.

“Language games” are less determinate than the Aristotelian “potential” or the Hegelian notion of thesis and antithesis leading to synthesis. Instead, their emphasis is on the importance of the context in which the rules of any particular language game is set.

What does it mean for fascism? It emphasises the importance of the context in developing potentials of the political, social and economic forms. Take, for example, a society that is functioning with reasonable coherence and is anchored to its traditional values. The potential seed for conflict is generated by questioning whether all its citizens “actually” subscribe to these traditional values or whether there are irreconcilable differences in their traditions. Because tradition is usually marinated in religion, the most obvious target are people from a minority religion or refugees. It can also be about ethnicity.

The ability to demarcate a minority group irreconcilably as “not of us” is the opening game, but the rules by which this is done --- for example, religion, ethnicity, etc --- depend on the context. In the middle game, state-sponsored violence is used against the targeted group with the aim of turning the difference into hatred. It helps to raise the heat if the targeted minority group can be presented as unduly favoured or privileged at the cost of the majority. By this the Marxian notion of class privilege is given a twist.

Manufactured hatred towards such exploiters, nurtured by state propaganda and an obedient media, spills over into pogroms, riots, lynching and ethnic cleansing. That these have to be treated as mere collateral damage is said or left unsaid by the state for the glory of our unified national culture. From this the fascist state emerges and promises to find a final solution that will end the problem, eliminating all debilitating differences. This promises to take the country to a mythical golden age of our past. We are in the midst of the end game of fascism when it fulfils the omerta code of honour, prevalent also among the mafia. As for the citizens, “who is deaf, blind and silent will live”.