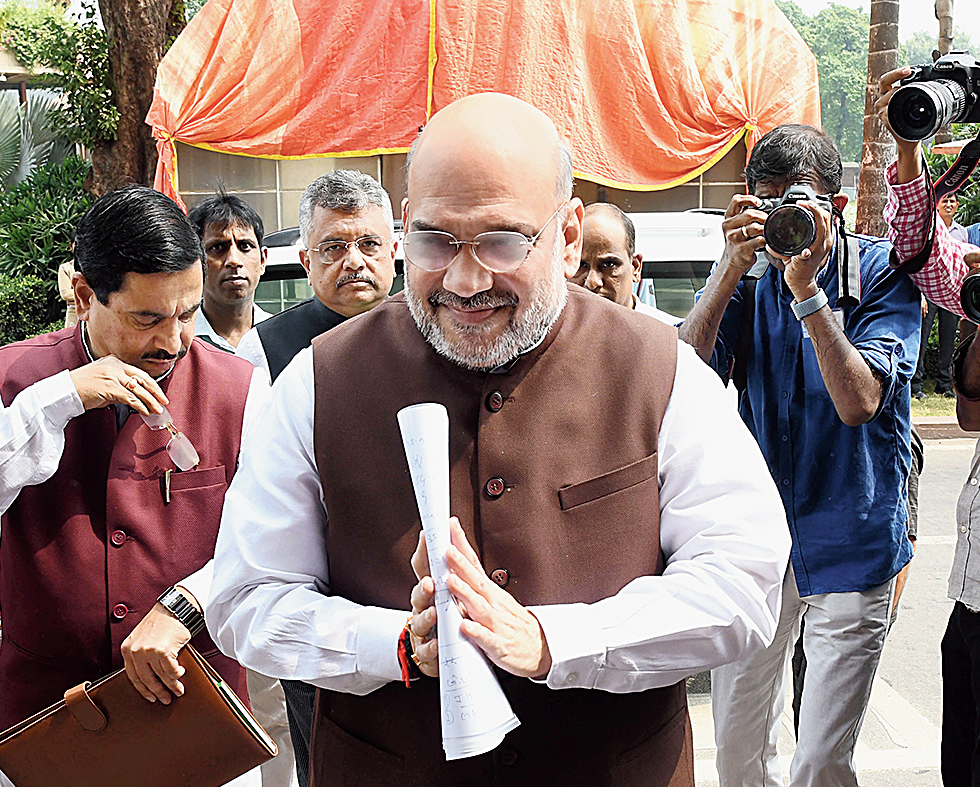 Home minister Amit Shah appears to have stepped out of the shadow of Prime Minister Narendra Modi with the government move to amend Article 370, perhaps even dimming his mentor’s halo a little.

Pro-BJP circles were on Monday evening largely attributing the government’s decision to scrap Jammu and Kashmir’s special status — a longstanding, core Sangh parivar demand — to Shah, some even describing him as the “real Iron Man”.

Parivar members seemed suddenly eager to see Shah as a “blunt but bold and decisive” leader who had even surpassed the original “Iron Man”, Sardar Vallabhbhai Patel, in some ways.

Officially, BJP leaders extolled both Modi and Shah for the “historic” move but in private, most of them said they saw the BJP president’s hand in the way the decision had happened “ek jhatke mey” (in one stroke).

“In just two months as home minister, adhyakshji (the party president) has corrected the mistake of the Congress that has made us suffer for 70 years. This couldn’t have happened without adhyakshji,” a BJP parliamentarian said.

“People may call him blunt but he is the kind of bold leader the country needs.”

The MP pointed to the significance of the day — Sawan ka teesra somvar (the third Monday of the auspicious month of Shravan) — and signed off by chanting “Har Har Mahadev”.

Many Rashtriya Swayamsevak Sangh officials too felt the move couldn’t have happened without Shah’s initiative.

“Modiji’s blessings were with him but the manner in which the decision has been taken reflects Amitbhai’s style,” a Sangh leader said.

He said the man in the street too was crediting Shah rather than Modi with the decision. “I heard people discussing in the street that this was Shah’s decision. Amitbhai is the real ‘lauh purush’ (Iron Man),” he added.

Shah had during Modi’s first government outgrown his role as a backroom strategist and organisational man to become the party’s second most powerful leader, almost as visible as the Prime Minister. Having joined the second Modi government as home minister, he is now seen as the “natural successor”.

Even the government’s managers seemed to be aiding the perception that the blow to Article 370 was more Shah’s doing than Modi’s.

After chairing the cabinet meeting at his residence that took the decision, the Prime Minister chose to lurk in the background, allowing Shah to take the issue to Parliament.

Even after the Opposition raised chants of “Prime Minister, come to Parliament” in the Lok Sabha, protesting against the Jammu and Kashmir Reorganisation Bill being moved in the Rajya Sabha, Modi stayed away.

In the Rajya Sabha, where the bill was passed, Shah led from the front, appearing keen to claim the credit and the glory.

Modi did make an appearance in the Rajya Sabha at the fag end but sat quietly as Shah held forth.

“You need political will and jigar (heart or courage)” to take such a decision, Shah said, thumping his chest and triggering huge applause from the treasury benches.

While Shah credited the decision to the Modi government, his speech was peppered with references to himself and his opinions, the tenor suggesting he had been the one to pilot the move.

“I feel this move to scrap (provisions of) Article 370 will integrate Kashmir with India and lead to overall development of the people of the Valley,” he said.

Modi later tweeted: “@AmitShah Ji’s speech in the Rajya Sabha was extensive and insightful. It accurately highlighted the monumental injustices of the past and coherently presented our vision for the sisters and brothers of J&K. Do hear.”

He attached a link to Shah’s speech in the Rajya Sabha.

Shah seems to have been implementing a well-thought-out strategy to project himself as a daring and strong-minded leader, unafraid to take risky decisions, right from the general election campaign.

In almost all his election speeches, he had gone about promising — much more than the Prime Minister did — to abrogate Article 370 and drive illegal immigrants out of the country.

The Sangh, the ideological mentor of the BJP, lauded Monday’s decision despite its deep disquiet over the rise of “arrogance” and a “personality cult” within its progeny.

“We congratulate the government for this bold initiative, which was very much necessary in the national interest, including that of Jammu and Kashmir. Everyone should welcome this notwithstanding,” Sangh chief Mohan Bhagwat said.