Advertisement
Home / India / In playhouse of the Raj, tables are turned

In playhouse of the Raj, tables are turned 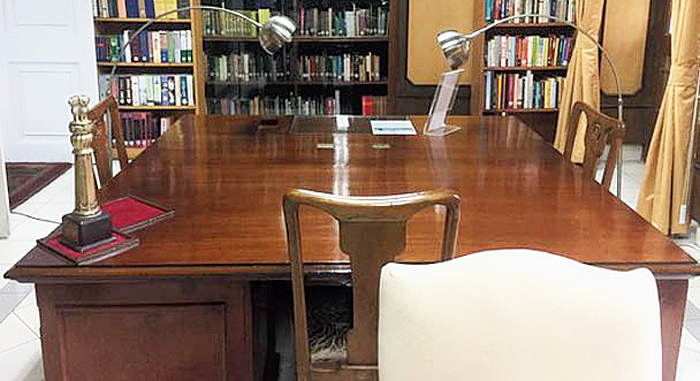 Governor Jagdeep Dhankhar has described as “iconic” a table that had apparently been used by Lord Curzon to sign Bengal’s 1905 Partition papers, unwittingly bringing back to the fore the Narendra Modi-Amit Shah dispensation’s unfamiliarity with the ethos of Bengal.

The governor tried to limit the damage from the blunder on New Year’s Eve by deleting the tweet but by then nearly 12 hours had passed and several questions been aired about whether the Centre’s representative in the state was “insensitive” to local sentiments about one of the darkest chapters in Bengal’s history.

The episode was reminiscent of the storm the BJP faced after a bust of Ishwar Chandra Vidyasagar was vandalised in Calcutta soon after a rally led by BJP chief Amit Shah had passed by during the general election campaign.

On Tuesday at 7.41am, Dhankhar tweeted two photos of him seated at a table in the Raj Bhavan library.

“Recording of New Year Message for the people of State of West Bengal in the historical Raj Bhawan Library while sitting on the iconic table from which Lord Curzon signed first Partition of Bengal in 1905,” the governor tweeted.

Outrage erupted online, suggesting the governor had touched a raw nerve, especially with the use of the word “iconic” to describe the purported table from which George Nathaniel Curzon — 1st Marquess Curzon of Kedleston who served as Viceroy of India from 1899 to 1905 — gave the orders to carve up Bengal.

For nearly 12 hours, Dhankhar defended his action. “The person sitting on this table is humble servant of the people mandated to uphold and protect the Constitution and serve the people of State of West Bengal. How can we there be ‘missing the wood for the trees’! (sic),” he tweeted in response to the scathing criticism.

As statements of condemnation — as well as some in support — poured in, Dhankhar posted: “There can never be an effort whatsoever to glorify bad memory for us. There is intrinsic authentic commitment to Bengali pride that is ever respected. The wholesome object was to project the new situation superseding earlier one (sic).”

However, state BJP leaders started turning fidgety. According to sources, the concern was conveyed to the governor in the evening.

Dhankhar then issued a clarification and deleted the original tweet.

“Responding to the reaction of friends and well wishers and respect I have for Bengali pride I have deleted the tweet. I get pride in Rabindranath & the spirit of unity. As Governor I appreciate sensitivity of the people and am sure all will appreciate my bona fide response (sic),” he tweeted at 7.15pm.

Several historians this newspaper spoke to said a mere deletion of the tweet did not mean much, given the question of insensitivity to the sentiments of Bengal.

A veteran Calcutta-based historian said there was no doubt that the Raj Bhavan — built in 1803 under the East India Company and known as the Government House till Independence — was the seat of countless historic decisions, including the abolition of the practice of Sati in 1829.

“Since the Government House came into being, it was natural that many historic decisions were taken from its premises. That table in question must also be antique. So what he (Dhankhar) tried to say was factually plausible, perhaps,” the historian said.

“But the choice of words could give an impression that he was trying to glorify a divisive, imperialist model, something that sowed the seeds of communalism,” the academic added.

Overseen by Curzon, the first Partition of Bengal in 1905 was a territorial reorganisation of the then Bengal Presidency, made up mostly of what is now Bihar, Jharkhand, Chhattisgarh, Odisha, West Bengal, Tripura, Bangladesh and swathes of the Northeast. Although administrative ease was cited, the move was seen as the first concrete attempt to divide the people along religious lines.

Following an intense agitation fuelled by inflamed nationalist sentiments, Bengal was reunited in 1911 by Viceroy Charles Hardinge but the capital was moved from Calcutta to Delhi.

“It was a heinous attack on the formidable communal solidarity of Bengal, which sowed the seeds of many of the tragic events of 1947…. As the first citizen of the state, he should have chosen his example wisely,” said a teacher of history at a central university.

“Maybe the assertion was rooted in a sense of self-assumed grandeur that has been apparent in most of his actions in public life since being appointed as the governor,” he added.

Before the tweet was deleted, Dhankhar’s statement drew criticism from the Trinamul Congress. Senior minister Subrata Mukherjee called it “most unfortunate”.

The BJP’s state unit, usually combative in its defence of Dhankhar, was on the backfoot.

“The people of Bengal had rejected the Partition of Bengal and the fact is known to everyone…. My question is, why that table, on which Lord Curzon had signed on the document to divide Bengal, still finds pride of place in Raj Bhavan?” asked BJP state chief Dilip Ghosh.

According to him, Dhankhar gave the table’s picture to remind people of the dark chapter in Bengal’s history. “The table should be set on fire,” said the Midnapore MP.

BJP national secretary Rahul Sinha tried to give it a contemporary spin.

“By referring to the Partition of Bengal, the governor tried to nudge people to stand up against Mamata Banerjee’s attempts to divide Bengal once again by playing communal politics,” he said.