What idea would a child have of world history if he does not get to learn about these important things, asks Vijay Kumar Chaudhary 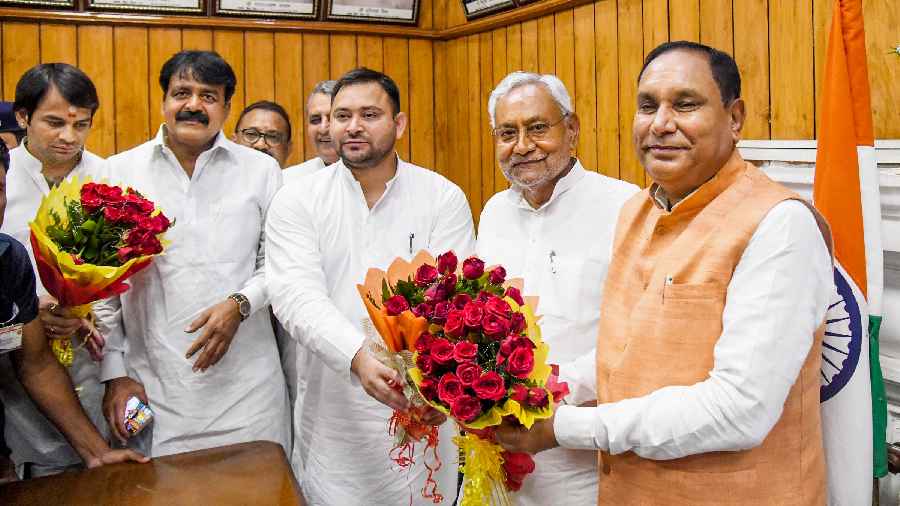 Bihar minister Vijay Kumar Chaudhary on Wednesday voiced grave concern over attempts to rewrite history at the instance of the Narendra Modi government at the Centre.

Chaudhary, who held the education portfolio while his party JD(U) was an NDA ally, told the state Assembly that the Nitish Kumar government was dismayed when it learnt about CBSE's decision to drop from its syllabus the chapters on Cold War and the Non-Aligned Movement.

"We were so worried. What idea would a child have of world history if he does not get to learn about these important things? So we decided, come what may, we will not toe the line in Bihar," said Chaudhary while taking part in the debate on the confidence motion brought by the new Mahagathbandhan (Grand Alliance) government.

The JD(U) leader, who is currently the minister for parliamentary affairs, also took a veiled dig at the cult of personality built around Prime Minister Narendra Modi.

All these unwanted changes are being brought about with a view to projecting the image of a new India. It seems they want to suggest that all things of consequence have taken place in the country only from 2014 onwards, said Chaudhary, alluding to Modi's ascent to power eight years ago.

Notably, history has been a bone of contention between Chief Minister Nitish Kumar, the JD(U)'s de facto leader, and the BJP, his ally for more than two decades which he dumped for the second time earlier this month.

An avowed socialist, Kumar has been opposed to the BJP's demands for renaming places like Bakhtiyarpur. The Bihar CM, who was then still in the NDA, had also voiced disapproval of Union Home Minister Amit Shah's contention that history be written afresh with more emphasis on the contributions of Hindu kings.

Chaudhary, in his speech, also spoke of the Centre's "negligence" towards Bihar which had high hopes from the JD(U)-BJP tie-up.

The NDA is now finished. We were the last one to go, said Chaudhary, referring to the BJP losing out all its major allies in the last few years.