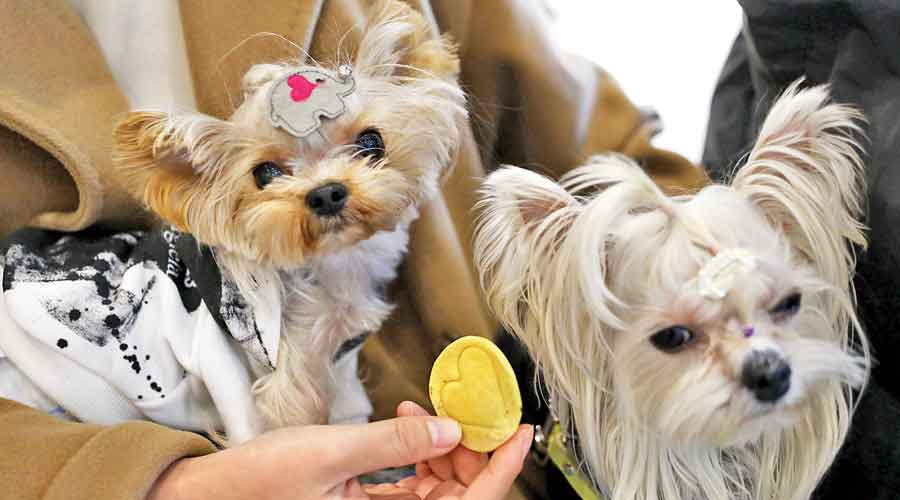 Their findings provide fresh insights into the domestication of canines through a process spanning thousands of years that started 15,000 to 30,000 years ago when wolves began scavenging around human settlements for leftover food
File picture
G.S. Mudur   |   New Delhi   |   Published 08.11.21, 12:52 AM

Human fondness for dogs displayed through acts such as petting may have played a much bigger role in the domestication of dogs than the lure of food, research by canine behaviour biologists in India has suggested.

A six-month study by the scientists at the Indian Institute of Science Education and Research (IISER), Calcutta, has found that stray dogs show signs of attachment and trust even after short periods of petting by an unfamiliar human.

Their findings provide fresh insights into the domestication of canines through a process spanning thousands of years that started 15,000 to 30,000 years ago when wolves began scavenging around human settlements for leftover food.

“They came for food, but stayed on for love,” said Anindita Bhadra, an associate professor at the IISER department of biological sciences who led the study that involved observing stray dogs in three towns in Bengal and one in Karnataka.

Through the domestication process, dogs have acquired the capacity to understand human actions, emotions, and gestures, from an early age, including pointing gestures to locate hidden food rewards.

In an earlier study, Bhadra, research scholar Debottam Bhattacharjee, and colleagues observed that 80 per cent of a sample of stray dogs responded to pointing gestures to specific locations without prior training.

They observed that dogs responded, surprisingly, even to momentary pointing, a finding that suggested that they have an innate ability to understand certain human gestures that transcends training.

In their latest study, the researchers exposed 80 stray dogs across neighbourhoods in Kalyani, Mohanpur, Raiganj and Bangalore to brief petting and exposed them to two sets of pointing gestures —one informative gesture leading to food rewards at the locations being pointed out, the second deceptive gesture with no food reward.

They observed that dogs that received petting followed pointing gestures irrespective of whether they led to food rewards or were deceptive. But dogs that did not receive petting discriminated between reward-linked and deceptive gestures.

“Dogs given petting continued to trust even when bluffed,” Bhadra said. “This was with three days of petting once a day. “This suggests that petting plays a big role in generating trust.”

Food had little impact on trust. “This makes adaptive sense — people may lure dogs with food and harm them, but those who show love never do that,” Bhadra said. Dogs have thus adapted to use petting as a cue for trust.

The new findings, published on Sunday in the research journal Animal Cognition, provide fresh insights into the possible role of positive human interactions during the dog domestication process.

Independent scientists have earlier argued that while wolves may have initiated the domestication process by hanging around human settlements, humans too could have played some role in domestication.

“We find it hard to believe it was a one-sided process with all agency ranging on the dog’s side,” Judith Benz-Schwarzburg, a researcher who is studying human-animal relationships at the University of Vienna, Austria, and her colleagues had said last December in a review in the journal Frontiers of Psychology.