Pakistan denied any role in the crash; officials said a technical glitch apparently caused it 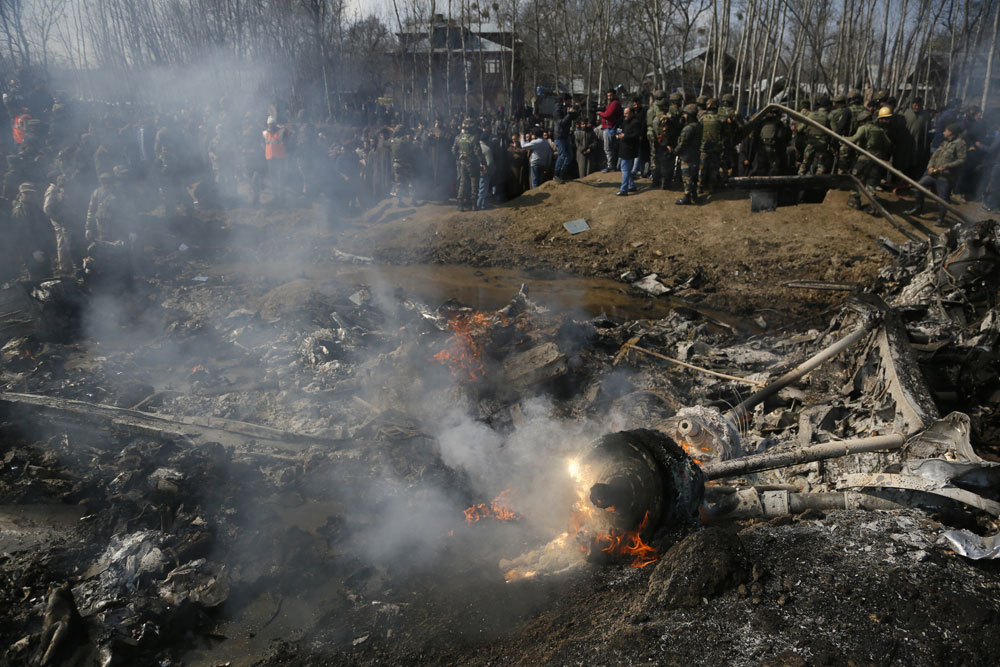 Villagers and soldiers gather near the wreckage of the IAF chopper that crashed in Budgam on the outskirts of Srinagar on Wednesday.
AP
Muzaffar Raina   |   Budgam   |   Published 27.02.19, 09:51 PM

The Indian Air Force lost six officers when their helicopter crashed into an open space in central Kashmir’s Budgam district on Wednesday, the incident taking place around the time the Pakistan Air Force conducted strikes at multiple places inside Indian territory on the other side of the Pir Panchal mountains.

A civilian was charred to death after coming under the crashing chopper.

An official spokesperson said the Mi-17V-5 helicopter of the IAF had left the Srinagar airfield “for a routine mission” at 10am and crashed 10 minutes later.

“All six air warriors on board the helicopter suffered fatal casualties. A court of inquiry has been ordered to investigate the accident,” he said.

The chopper crashed not far from a residential area in Gerand, around 25km from Srinagar, forcing scores of tense residents, who initially feared their village had turned into a theatre of war, to flee.

Pakistan has denied any role in the crash and officials in Budgam said a technical glitch apparently caused its fall.

DIG central Kashmir V.K. Birdi said a “flying object” fell around 10am, making a loud sound. He said they were ascertaining the identity of those killed and the make of the “flying object”.

“The circumstances of the incident are being inquired into. Investigative teams of the police and the air units are at the spot. They are ascertaining it,” he told reporters at the crash site.

Birdi said around 4pm that three bodies had been recovered from the debris and efforts were on to find the others. Officials later said seven men had died in the crash and most of the bodies were charred beyond recognition.

Eye-witnesses said they saw a chopper catch fire in the sky before it came crashing down.

“There were some people on the ground and they ran for their lives when they saw the plane (helicopter) coming down. One of them, Kifayat Hussain, literally froze on the spot and he was crushed under the plane,” said Mohammad Abbas, a local. “We recovered his body, which had been completely burnt.”

Kifayat lived in a house located metres from the crash site.

Residents descended on the spot in hundreds. The helicopter had split into two and smoke was billowing out of the debris even hours after the crash.

Tension gripped the area as another chopper carrying IAF men tried to land near the crash site.

Some people, angry over the civilian death, threw stones at the second chopper, forcing the security personnel present at the spot to fire in the air to disperse the mob.

The casualties could have been higher had the chopper crashed into the residential area, but it appeared the pilot steered it to the field to prevent more deaths.

Fear has gripped the Valley against the backdrop of the India-Pakistan tensions and the cries for war. Planes can be continuously seen flying over many parts of the Valley, adding to the panic.