How Bodh Gaya averted an Ayodhya 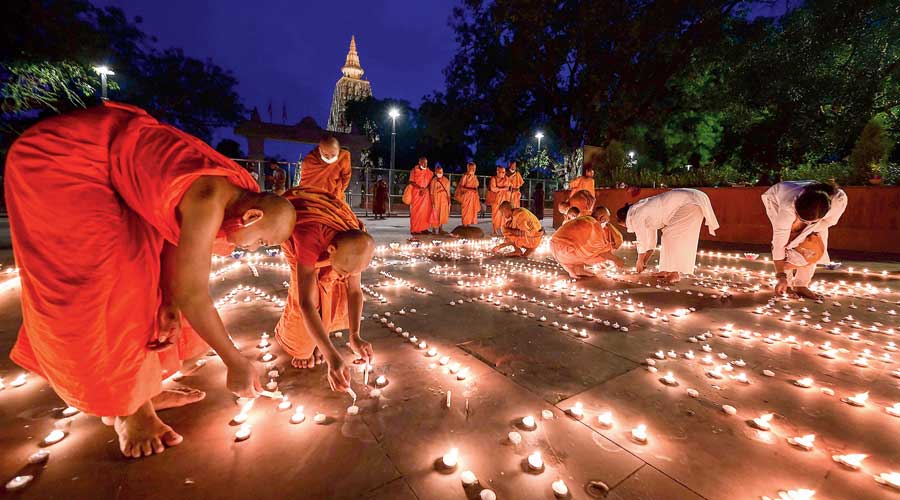 The dispute over Ram’s birthplace in Ayodhya may have helped bring the BJP to power but a similar problem was resolved amicably in Bihar’s Bodh Gaya without violence or social-political turmoil despite the involvement of devotees from several countries.

What helped shape the peaceful solution was support from a galaxy of Indian stalwarts of the time, from Rabindranath Tagore and Mahatma Gandhi to Swami Vivekananda, Jawaharlal Nehru and Rajendra Prasad.

The history of the dispute over the Mahabodhi temple in Bodh Gaya has been told vividly in a new book by Jairam Ramesh who has compared it with the Ayodhya issue, recalling how the Babri Masjid was demolished by rampaging mobs on December 6, 1992, after a long legal and political battle.

The Bodh Gaya dispute too took 67 years to resolve but the two sides — Buddhists and Hindus — have been living in peaceful coexistence since an agreement was worked out in a truly democratic spirit.

Ramesh’s book, The Light of Asia: The Poem that Defined the Buddha, is mainly a tribute to Sir Edwin Arnold, author of the much celebrated The Light of Asia, a narrative poem published in 1879 that shaped the larger world’s understanding of the Buddha.

Ramesh himself describes his book as a biography of the original book, seen as a milestone in the 19th-century rediscovery of the Buddha. It was Arnold who had first raised the issue of the Mahabodhi Temple, starting a campaign in 1886 to restore to Buddhists the ownership of the site, which had been in the control of Hindus since the 18th century.

Bodh Gaya was where Siddhartha Gautama attained enlightenment under the sacred tree and became Gautama Buddha. It was Emperor Ashoka who built a temple there first, in the third century BC.

Ramesh writes: “Sometime in the last decade of the 16th century, a wandering Sivaite sanyasi established his abode close to the ruins of the temple.”

“In August 1727, a Mughal prince gave the Sivaites a deed to establish ownership rights in the area. The Sivaites took control of the temple and its surroundings following the grant of the deed and from then on, both Hindus and Buddhists had access to it.”

Arnold, anguished by the plight of the temple, started writing about it. A monk from Ceylon (now Sri Lanka), Anagarika Dharmapala, who later founded the Mahabodhi Society, launched the struggle to regain Buddhist control over Bodh Gaya.

Arnold was clear that Bodh Gaya (he called it Buddh-Gya) was to the Buddhists what Jerusalem is to Christians, Mecca to Muslims and Varanasi to Hindus. What lent credence and force to his campaign was the explicit support from personalities like Tagore, Vivekananda, Gandhi and others who were all fascinated by his book, The Light of Asia.

The Mahabodhi temple in Bodh Gaya

In January 1922, Ramesh wrote, Tagore visited Bodh Gaya and issued a statement: “I am sure it will be admitted by all Hindus who are true to their own ideals, that it is an intolerable wrong to allow the temple raised on the spot where Lord Buddha attained his enlightenment to remain under the control of a rival sect which can neither have the intimate knowledge of or sympathy for the Buddhist religion and its rites of worship. I consider it to be a sacred duty for all individuals believing in freedom and justice this great historical site to the community of people who still reverently carry on that particular current of history in their own living faith.”

Tagore’s friend Okakura Kakuzo, an artist from Japan, too had visited Bodh Gaya with Vivekananda. He wanted to buy land adjacent to the temple to erect a rest house for Japanese pilgrims. The Hindu mahant agreed as this was a deviation from the Mahabodhi Society’s insistence on total control of the premises. Okakura must have had the backing of Vivekananda as the local address he gave for the purchase of the land was that of Belur Math. But Vivekananda’s sudden passing derailed the proposal.

The trajectory of the dispute had several similarities with the Ayodhya issue. Much like the Ram idol that was placed inside the mosque, Dharmapala had placed a Buddha statue he had got from Japan in the sanctum sanctorum of the temple. The Hindu priests got it thrown out, compelling Dharmapala to file a case.

The Hindus too filed a case and hearing began in Calcutta High Court. In 1922, when the Congress was holding its session in Gaya, Buddhists pleaded with Gandhi to resolve the issue. Gandhi asked Rajendra Prasad to tackle it.

The dispute was lingering without any solution in sight. Ramesh’s book says: “Jawaharlal Nehru organised an Inter-Asian Relations Conference in New Delhi between 23 March and 2 April 1947, even before India attained her freedom. Leaders from 30 countries participated in the conclave, which was also addressed by Gandhi.

“On 31 March, while this assembly was in session, an All-Asia Buddhist Convention was also held in the city with representatives from Ceylon, Siam, Burma and Tibet attending along with leading Indian Buddhists as well.”

The book explains that Nehru met a delegation of this Convention, whose most pressing demand was that the management of the Mahabodhi Temple at Bodh Gaya be with Buddhists. Nehru promised them “all support for the restoration of Buddha-Gya to the Buddhists”.

A year later, a bill was introduced in the Bihar Legislative Assembly proposing joint management of the site through a committee made up of both Hindus and Buddhists.

Nehru suggested that an advisory committee including members from countries where Buddhists reside be attached to the management committee. Nehru was very mindful of the role that the Mahabodhi Society had played in the restoration of a number of sites associated with the Buddha, most notably Sarnath.

The bill was passed by the Bihar Assembly on June 19, 1949, and the transfer of ownership from the mahant to the management committee took place on May 28, 1953. The Mahabodhi Temple was declared a Unesco World Heritage Site in 2002.

Ambedkarite Buddhists demanded full control of the Mahabodhi Temple after the demolition of the Babri Masjid in 1992 but their campaign never took off.

Asked whether an amicable solution was possible only because there was no political party to hijack the issue, Ramesh said: “Remember that the dispute was in an era of non-competitive politics. Also everybody of note — Tagore, Gandhi, Subhas Chandra Bose, Nehru, Rajendra Prasad — were very great admirers of the Buddha and were very sensitive to Buddhist concerns regarding control over the Mahabodhi Temple. But the agitation took (more than) 65 years to resolve.”