Hounded over coronavirus, couple kill themselves

Ashok Kumar, a labourer, had been prevented from going home when he returned from Punjab, although he had no symptoms 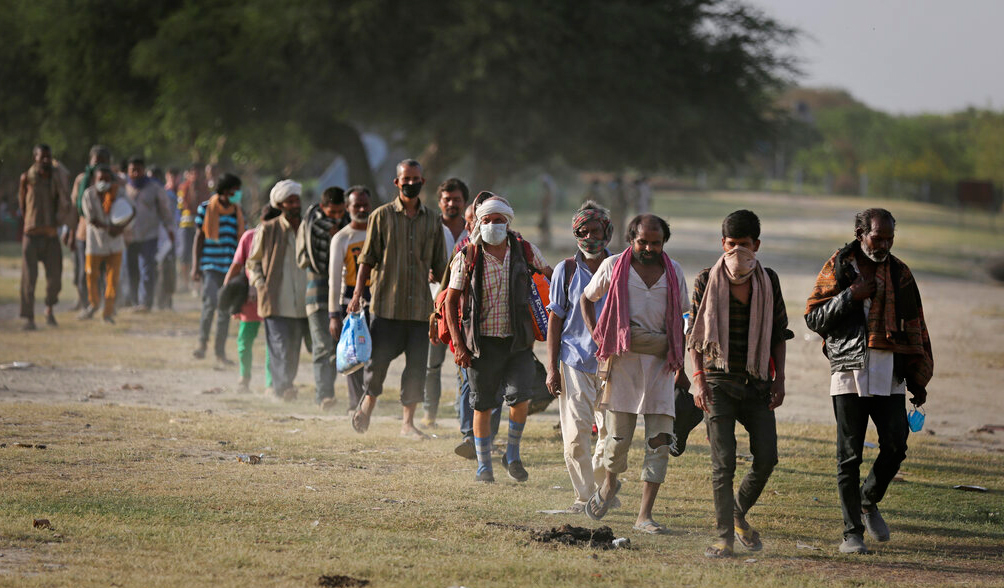 Indian migrant laborers and homeless people walk towards a bus as they are being evicted from the banks of Yamuna River where they have been squatting during lockdown in New Delhi, Wednesday, April 15, 2020.
(AP)
Piyush Srivastava   |   Lucknow   |   Published 16.04.20, 10:24 PM

A 24-year-old man quarantined at an isolation centre near his village in Uttarakhand after he returned from Punjab was on Thursday found hanging from a tree with his wife in the first purported case of twin suicides over harassment related to the Covid-19 outbreak.

Police said Ashok Kumar was a labourer and had been prevented from going home when he returned from Punjab on April 4, although he had no symptoms.

A relative told reporters his wife was being pressured to leave their village, Tipparpur.

The couple had got married just four months ago, the relative said.

Ashok had been quarantined in a school turned isolation centre near his village under Sahaspur police station in Vikas Nagar city, Dehradun district. There were 37 people at the centre before Ashok’s purported suicide.

“When health officials visited the centre on Tuesday evening, they found only 36 persons there. Ashok was missing from there.

“The other inmates said his wife Rajju Devi had visited the centre and they had together gone towards a nearby forest area. They were found hanging from a tree by a dupatta on Thursday morning,” V.S. Dhoni, circle officer, Vikas Nagar, said.

“Prima facie it looks like a suicide pact for some reason. But we are also probing other angles. Their bodies have been sent for post mortem,” the officer said, denying that any of the quarantined persons at the centre had symptoms of Covid-19.

Thirty-eight people have so far tested positive for Covid-19 in the hill state, including nine who have recovered. None has died.

Ashok’s relative told reporters some villagers had been mounting pressure on Rajju to leave the village over suspicions that her husband had contracted the disease.

“Ashok had sent a WhatsApp message to those who were opposing his entry into the village permanently and pressuring Rajju to leave that they had decided to commit suicide and they (the villagers) should no longer be angry with him.

“He has not accused anybody directly because he and his wife were feeling helpless. Those who wanted to support Ashok kept silent out of fear of the affluent villagers,” the relative was quoted as saying.