A group trying to tackle a pandemic that is not corona 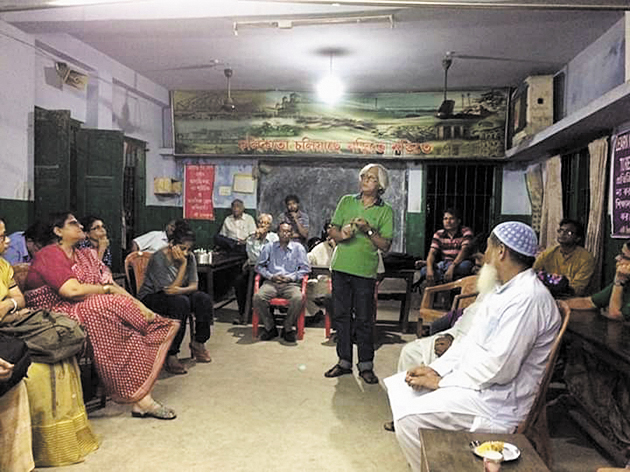 None of you rascals bothered to keep track/Of how many went where, and how many went back/And now, since we must all name and shame,/Have the Much Maligned shoulder all the blame. Hutom, the wise owl, hooted thus his Covid song from the perch of the Sahomon website. He was referring to the Tablighi Jamaat incident and the way righteous outrage had once again wrongly whipped up fresh Islamophobia. Over 2,000 people from all over India and different parts of the world had assembled for the convention organised by the conservative Muslim group in Delhi in early March. At the time, the coronavirus pandemic was just beginning to unravel in India, but eventually it came to be known that there had been a significant number of cases that emanated from the Nizamuddin event.

Sahomon, a physical, virtual and an ideological platform of the like-hearted, was set up two years ago against the backdrop of a seemingly deepening communal chasm in Bengal. Its founding principle is a couplet by the Baul mystic and philosopher, Lalon, and goes, “Porshi jodi amai chnuto/Jom jatona shokol jeto durey.” Roughly translates thus: if only my neighbour stood by me, I would be able to stave off Death itself. Poignant and wishful, Lalon’s words from almost 200 years ago today sound more like a nostalgic lament than a mission statement.

A yearning might be at the core of Sahomon, a collective yearning for an aam rajya, but the organisation does not stop there. Its founders believe that if most people could be taught to see through the darkness — much like Hutom — of communal hatred all would be well, the peddlers of lies would be out of business.

Milan Datta, journalist and one of the six co-founders of Sahomon, says, “We started by organising sabhas across neighbourhoods. Sabhas not in the sense of speaking at a group, but as in engaging with a group.” The point of these was to re-familiarise the neighbour, dispel myths, plug those gaps in understanding of and between communities that have co-existed for centuries.

Suman Sengupta, a civil engineer and a co-founder of Sahoman, says, “It is shameful that people don’t know why a devout Muslim reads the namaz five times a day, why they observe two Ids, what the difference between the two is.” In fact, because the sabhas were supposed to be interactions as opposed to an address, the members of Sahomon even did away with a physical stage that typically puts the addresser at a level different from the addressee.

Every sabha, in urban and rural Bengal alike, revealed layers of ignorance, hardened perception, and conflating of day-to-day issues with matters of faith. Referring to a sabha in Pratapgarh close to Jadavpur, Sengupta says, “A lot of people there complained about how reading the namaz on the road inconvenienced many.” Datta interjects, “What they didn’t know is that it isn’t some ploy by the whole of the Muslim community to inconvenience everyone else. They didn’t know that within the Muslim community too there are those who object to this arrangement.”

What people also don’t seem to realise but need to, according to Sahomon, is that regressive thinking is independent of faith. It seems when Ayesha Khatun spoke about patriarchy and the Muslim community at a sabha in Birbhum, the Hindu audience tried to shout her down, possibly because of obvious resonances. In Malda, a workshop with local women on birth control measures couldn’t be sustained beyond a point.

Oftentimes Sahomon has had to go beyond the talk. When a Hindu-Muslim wedding nearly fell through the last minute after family opposition, Sahomon adopted the wedding, rented a hall and saw it all through, from the exchange of vows to the wedding feast. On the Hindu festival of Poush Sankranti, homemade sweets were distributed amongst the women on anti-CAA dharna at Park Circus. And till the coronavirus upset the apple cart, Sahomon also organised tours of khariji madrasas — centres of Muslim religious education that are unrecognised and unaffiliated — for anyone who wanted to know how they actually functioned as opposed to their rumoured purpose.

Sahomon members know these efforts are nowhere close to enough. They also cannot seem to emphasise enough that this is not meant to be about Muslims and for Muslims, and for even the smallest efforts to bear fruit, they must be able to get through to the Hindu audience. The handout titled “Mithyar Shontrash”, or The Terror Spread by Lies, picks up oft-quoted ideas about Hindus and Muslims and discusses them with facts, figures and information. Some topics heads are — why Muslims cannot rent a place in Hindu neighbourhoods; Hindus never invite Muslims home for any kind of religious festivity; when Pakistan defeats India in a cricket match, Muslim neighbourhoods celebrate.

Says Sengupta, “Don’t think we are a bunch of idealists far removed from the ground realities. We know in the face of the huge army that is the communal force, we are but a speck. They are proactive, we are merely reactive. But we believe every human being is intrinsically good and we are appealing to that inherent goodness, that inherent humanity.”