In view of maintaining law and order due to the row over dress code in colleges, the Rapid Action Force took part in it to instil courage in the minds of people 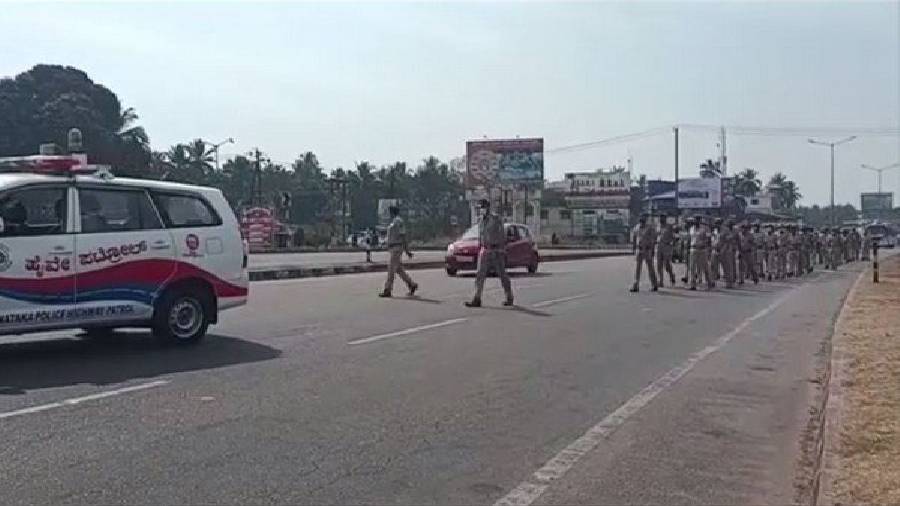 Police personnel hold flag march in Udupi ahead of re-opening of schools amid Hijab row.
Twitter/@WorldDfenceNews
Our Bureau, PTI   |   Mangaluru   |   Published 12.02.22, 09:54 AM

Police held flag marches across the twin districts of Dakshina Kannada and Udupi as part of preventive measures in the wake of the hijab controversy.

In view of maintaining law and order due to the row over dress code in colleges, the police took out route marches in some towns in Udupi district on Friday to instil courage in the minds of people.

He said the RAF, stationed at Panambur here, will be pressed into action in the event of any law and order issue to ensure the safety of the public.

Udupi police also conducted a flag march on Friday at several places in the district, the epicentre of the hijab controversy. Flag marches were held in Udupi, Kaup, Kundapur, Karkala, Padubidri, Brahmavar, Byndoor and Shirva.

Udupi district Superintendent of Police N Vishnuvardhan said the safety of the public will be ensured and the route march is to instil confidence among the people.