Authorities on Sunday sounded a preliminary flood alert to people 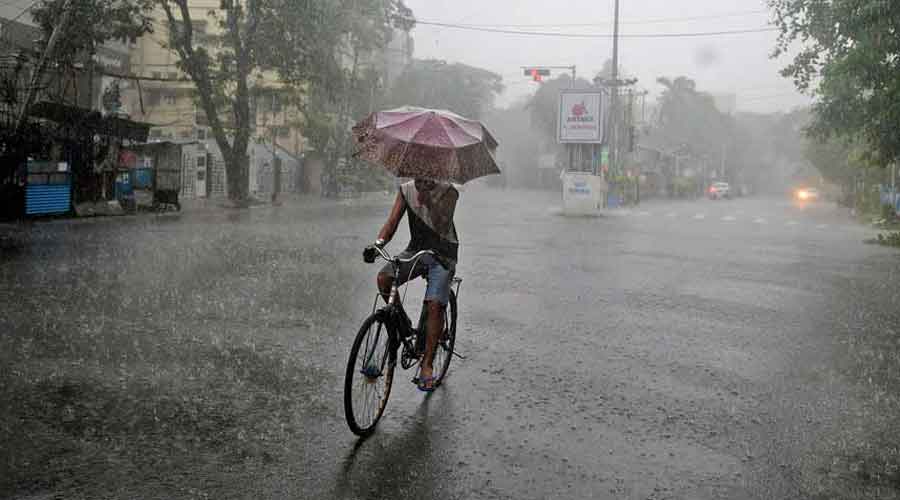 Heavy rains lashed Chennai and its suburban areas overnight leading to all round water-logging and authorities on Sunday sounded a preliminary flood alert to people as three city reservoirs were opened in a phased manner to release surplus water.

Stalin, along with Cabinet colleagues distributed flood assistance, including rice, milk and blankets to people in affected areas, housed in a temporary shelter here.

Health Minister Ma Subramanian said Chennai experienced 20 cm rain in about 12 hours since last night. According to IMD data, the rainfall ranged between 10 CM and 23 CM in Chennai and its suburbs.

The Kamarajar Salai point (DGP Office on the Marina beachfront) near the Tamil Nadu Secretariat recorded the highest of 23 CM and suburban Ennore in north Chennai 10 cm.

Some of the suburban locations, including areas covered in nearby Tiruvallur district received between 3 CM (Poondi and RK Pet) and 9 CM (Cholavaram). The IMD has given a 'red' category warning, indicating heavy rains in Tamil Nadu and neighbouring Puducherry on Sunday.

In view of increase in showers in catchment areas, surplus water was released from Poondi reservoir, which was raised in a phased manner up to 3,376 cusecs of water, the Tamil Nadu State Disaster Management Authority said in a tweet.

Similarly, Chembarambakkam and Puzhal reservoirs, two other important sources of drinking water to the Chennai city were opened to let out surplus rain water, water resources authorities here said adding the initial release -from both the facilities- was to the tune of about 500 cusecs.

Four teams of National Disaster Response Force have been deployed to assist in rescue operations in case of emergency. One team each in Chengalpet and Tiruvallur and two teams at Madurai are stationed for rescue operations, the TNSDMA said.

While most parts of the city and suburbs witnessed waterlogging, parts of several neighbourhoods in Saidapet, Velachery, Adambakkam, Madipakkam and West Mambalam experienced inundation up to about two to three feet. Several subways were filled with rainwater up to to several feet.

Rain water also entered several houses in such areas prompting residents to move out to safer locations. Electricity supply was disconnected to such areas as a precautionary measure.

Stalin, also the DMK president directed party office-bearers MPs, and MLAs to work in tandem with authorities to address the grievances of people in affected areas.

Inspecting inundated localities here, Subramanian said, "the present scenario is not like what was witnessed in 2015 in Chennai. CM Stalin has directed officials to monitor water level in reservoirs and take necessary steps according to the situation. Civic personnel are on the job to tackle the situation."

From Saturday morning, Chennai and several suburbs in Kancheepuram and Tiruvallur districts witnessed intermittent rains and showers became non-stop since night that led to waterlogging in many areas inconveniencing people.

In 2015, Chennai experienced a nightmarish flooding followed by heavy rainfall and also release of surplus water into the Adyar River from Chembarambakkam reservoir.