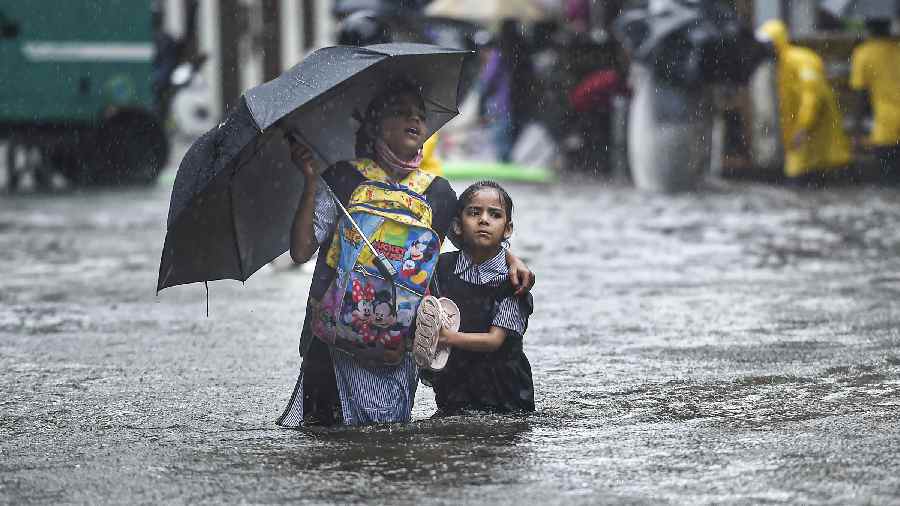 As incessant rains continue to lash Kerala with reports of landslides and rising river water levels in some parts of the state, the India Meteorological Department (IMD) issued a red alert in 10 districts of the southern state for Tuesday.

IMD also issued a Red alert in the same 10 districts for August 3 also.

The red alert is issued in all the districts of the state barring Thiruvananthapuram, Kollam, Pathanamthitta and Kasaragod, where Orange alerts have been issued for August 2 and 3, according to an IMD district rainfall forecast issued for Kerala at 10 AM on Tuesday.

In view of the red alerts issued by the IMD, Kerala Chief Minister Pinarayi Vijayan said people should be very careful and everyone should be prepared to strictly follow the warnings issued by the Disaster Management Authority.

“The warning of very heavy rains in Kerala in the days ahead should be taken very seriously as continuous rainfall like now of more than 200 mm is likely to create a crisis,” the CM said in a Facebook post.

“There is a need for vigilance and preparedness in the state in anticipation of natural disasters like landslides, mountain floods, flash floods, and waterlogging in cities and low-lying areas,” he said.

Vijayan also said that the Central Water Commission has issued a warning regarding the water levels of various rivers, like Pampa, Manimala and Neyyar, crossing the danger marks at several places.

He said that the commission has also warned that water levels of rivers, like Achankovil, Kaliyar, Thodupuzha and Meenachil are also on the rise and therefore, people living on the banks of all these rivers should be cautious and steps are being taken to relocate them to safer locations.

He has requested everyone not to be reluctant to relocate and to follow the instructions of the authorities.

He further said, in the post, that the State Emergency Operations Centre of the Disaster Management Authority was functioning as the state-level control room with representatives of the National Disaster Response Force (NDRF), State Rescue Forces and other departments concerned and control rooms have also been set up in all districts and taluks.

“Besides that, nine NDRF teams have been deployed in 9 districts of the state with two units of the Defence Security Corps stationed in Kannur and Palakkad districts and one column of the Army in Thiruvananthapuram district,” he said.

“As there is a possibility of strong winds along with rain, steps should be taken on a war footing to secure electric lines, posts, trees and hoardings to avoid accidents due to their collapse,” he said and added that earthmovers and other machinery should be kept ready in advance in disaster-prone areas to deal with landslides and flash floods in hilly areas.

“Restricting travel to hilly areas and on water bodies, avoiding night time travel and advising fishermen not to go out to sea in view of possibility of strong winds and huge waves, were some of the other directions that the state government has issued,” the CM said.

The CPI(M) state secretariat, in a release, said it has asked all its workers to be part of the relief and rescue work in the state.

The Pathanamthitta Collector has been tasked with taking appropriate steps to ensure that the functions related to the Niraputhari festival, which marks the beginning of the harvest season, and Aranmula Vallasadhya at Sabarimala are not disrupted, a release said.

The IMD warned of widespread and isolated heavy and very heavy rainfall in the state till August 5.

The incessant rains caused landslides in several places in Kannur district on Monday night leading to the death of two persons -- a 45-year old man and a two-and-a-half year old girl -- with another 55-year old man still missing, the district officials said in a release.

In Kottayam, the body of a man who had gone missing a day ago was recovered on Tuesday morning from the Koottikkal Chappath area of the district, the emergency operations centre there said.

Data on the daily water-levels of the dams operated by KSEB (Kerala State Electricity Board) indicate that water-levels in five Idukki dams -- Ponmudi, Kundala, Kallarkutty, Erattayar and Lower Periyar -- as well as the Moozhiyar and Poringalkuthu dams in Pathanamthitta and Thrissur, respectively, have reached the red alert storage levels.

Two Irrigation department reservoirs in Palakkad -- Meenkara and Mangalam -- reached Orange alert storage levels on Tuesday due to the heavy rains, according to the data on the Kerala State Disaster Management Authority (KSDMA) website.

The Ernakulam district officials also said that an emergency action committee comprising local bodies will be formed to take steps to prevent waterlogging in Kochi city and supervise rescue and evacuation operations.

As the heavy rains continued, 47 relief camps have been opened in various districts of the state following the severe rains and 757 people have been relocated there.

The CM said the camps should adhere to COVID-19 norms and there should be special facilities for pregnant women, lactating mothers and persons with special needs.

In Thrissur, the Chalakudy river water levels rose by nearly 5 metres around 2 AM on Tuesday due to the heavy rains leading to the district administration advising those living on the low-lying areas of the river's banks to move to safer places.