As the MLAs were disqualified in the last week of July, bypolls would have to be held by the end of January 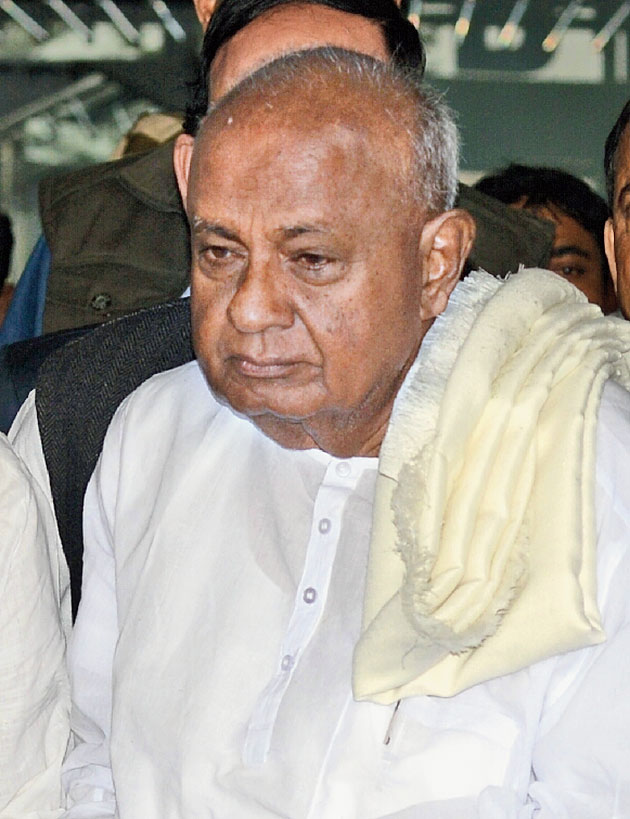 HD Deve Gowda had recently told a meeting of JDS state leaders they needed to go down to the grassroots well ahead of the by-elections.
Telegraph file picture
Our Special Correspondent   |   Bangalore   |   Published 19.09.19, 08:44 PM

The Janata Dal (Secular) is gearing up to go alone in possible by-elections in 17 Assembly segments although the disqualified lawmakers are waiting for the final word from the Supreme Court.

Former Prime Minister and JDS national chief H.D. Deve Gowda has asked his party to get ready to hit the road alone in a clear sign that the alliance with the Congress is over.

The election dates are yet to be announced since the disqualified MLAs — three from the JDS and 14 from the Congress — are waiting for the top court to rule on their plea for relief.

As the MLAs were disqualified in the last week of July, the bypolls would have to be held by the end of January.

Gowda had recently told a meeting of JDS state leaders they needed to go down to the grassroots well ahead of the by-elections. “The bypolls may be held by January. But let us get ready to face them alone and not with any alliance,” Gowda had said at the party meeting on Monday.

A JDS source said Gowda’s word has reached village-level party workers and they too preferred to fight alone. “He (Gowda) had made it very clear that we should not dip our fingers in the same boiling oil and burn them again,” the JDS functionary told The Telegraph on Thursday.

“His decision has rejuvenated the party cadres who had wanted to fight even the Lok Sabha polls alone,” the functionary, who did not want to be named, added.

The Congress and the JDS had clinched a deal to work together after the 2018 state polls led to a hung Assembly. The post-poll deal helped the two parties keep the BJP at bay for 14 months before the saffron party triggered defections that brought down the coalition government in July.

The coalition had faced a humiliating defeat in the summer Lok Sabha polls when they managed to win just one seat each, losing even in their strongholds. Even Gowda had lost in Tumkur while his grandson Nikhil Gowda, son of former chief minister H.D. Kumaraswamy, lost in the party’s stronghold of Mandya. Both parties had then blamed each other for the debacle.

Being traditional rivals, grassroots workers of the JDS and the Congress had refused to work together during the parliamentary elections. “We need to regain our lost ground by contesting alone and reinvigorating the grassroots,” the JDS leader said.

The Congress too welcomed the idea since its cadres are against the tie-up with the JDS. “Since the JDS leadership has made it clear that they would go alone, the track is clear for us to fight alone and regain our hold on the state,” party spokesperson V.S. Ugrappa told this newspaper on Thursday.

“We could have gone alone even in the Lok Sabha polls. But the ruling alliance we were part of led us to jointly fight the polls, which we lost badly. This is the time to regain our strength and win as many seats as possible.”

“Let there be a triangular fight. We are still strong in all the 14 seats (of the disqualified rebels) where bypolls will be held. That’s why we also want to fight alone since we are a national party with good support in Karnataka,” Ugrappa said.

The arrest of Congress trouble-shooter D.K. Shivakumar could also have an impact.

“The unjust arrest and harassment of Shivakumar will work in our favour as his Vokkaliga community will shift en bloc to the Congress. That is why we want to fight the bypolls alone,” the Congress spokesperson added.

Shivakumar, who had staved off alleged poaching attempts by the BJP in at least two states, is in judicial custody in Delhi following his arrest by the Enforcement Directorate in a money-laundering case.