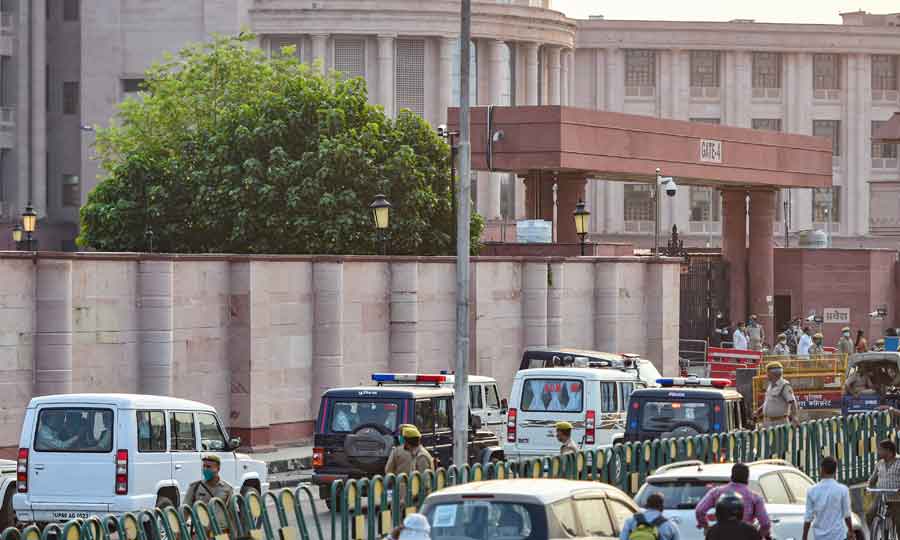 Family members of the Dalit woman who was allegedly raped in Hathras leave the high court after a hearing in Lucknow on Monday
PTI
Piyush Srivastava   |   Lucknow   |   Published 14.10.20, 03:13 AM

Allahabad High Court has said the Uttar Pradesh government’s hasty cremation of the Hathras teenager without her family’s consent is “prima facie an infringement upon the human rights of the victim and her family”.

The court said the administration so far had failed to come up with a convincing reason to justify the urgency.

Responding to the Hathras district magistrate’s claim that jerry cans near the pyre “probably” carried “Ganga jal”, and not kerosene, the court said the official “as of now, could not satisfy us about observance of last rites while cremating the victim’s body as per traditions and customs of the family”.

The court reminded police that the “mere absence of semen during forensic examination, though a factor for consideration, would not by itself be conclusive as to whether rape had been committed or not, if there are other admissible evidence”.

The administration has been trying to suggest the girl was not raped although she had said several times she was sexually assaulted.

The high court warned against “character assassination” of the victim and urged restraint by officials, political parties and the media. Efforts had been made to malign the victim by planting reports in a section of the media.

Justices Rajan Roy and Pankaj Mittal of the Lucknow bench of Allahabad High Court said in its order on Monday, made public a day later: “We do not at this stage find any good reason on behalf of the administration as to why they could not hand over the body to the family members for some time, say for even half an hour, to enable them to perform their rituals at home and thereafter to cremate it either in the night or the next day.

“Admittedly, though the administration may not have categorically refused the family members to see the face of the deceased but the fact remains that it was not shown to any of them in spite of their repeated requests. Thus, the expanded fundamental right to life, to live with dignity and to exist with dignity even after death as well as the right to decent burial/cremation appears to have been infringed, hurting the sentiments of not only the family members but of all persons and relatives assembled at the spot.”

The bench added: “Facts and circumstances, as of now, ex facie, reveal that the decision to cremate the victim in the night without handing over the body to the family members or their consent was taken jointly by the administration at the local level and was implemented on the orders of the district magistrate, Hathras. This action of the state authorities, though in the name of law and order situation, is prima facie an infringement upon the human rights of the victim and her family.”

The police and the Uttar Pradesh government have denied the allegation of forcible cremation, claimed that the victim’s family was present and explained the hurry by pointing to the possibility of violence.

The high court, which has titled the case “Right To Decent and Dignified Last Rites/Cremation”, will hear the matter again on November 2.

The court said that denying a decent cremation was a gross violation of the fundamental rights accorded to the deceased under Articles 21 and 25 of the Constitution.

“If so, who is responsible for the same so as to fix their accountability and liability and how will the family of the victim be compensated for it?” the court asked.

“The government should come out with appropriate procedures as guidance for district officials to deal with such situations,” the court added in its order.

The order noted that the mother of the deceased had lamented that she wanted to see the face of her daughter, but was not allowed and the body bunt at night against her wishes.

“She broke down while narrating the entire story starting from the date of the incident when the girl was allegedly raped,” the order said.

It specifically pointed out that the sister-in-law of the victim had accused officials of misbehaving with the family.

The court said about additional director-general of police Prashant Kumar in the order: “We asked Sri Kumar as to whether it was proper for anyone not directly connected with the investigation to comment on any evidence relating to the offence (and on whether there was) rape or to draw conclusions based thereon as to whether offence was committed or not, when the investigation was still pending and such person was not part of the investigation, he fairly agreed that it should not happen.”

Prashant Kumar had told journalists that the girl had not been raped as no semen had been found. The Uttar Pradesh government has taken the same stand in the Supreme Court, citing reports of forensic labs in Aligarh and Agra.

The Lucknow bench said in its order: “Without in any manner intending to interfere with the right of freedom of expression, we request the media as also the political parties to air their views in a manner which does not disturb social harmony and/or infringe upon rights of the victim’s family and that of the accused. No one should indulge in character assassination of the victim just as the accused should not be pronounced guilty before a fair trial. The investigating agency and the courts should be allowed to determine these issues.”