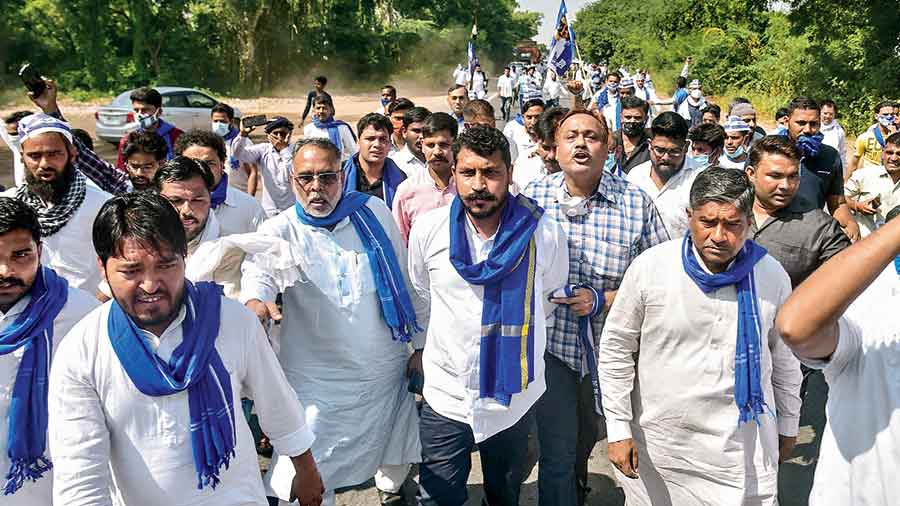 Bhim Army president Chandrashekhar Azad and party workers on their way to meet the family members of the Dalit girl who was murdered in Hathras
PTI picture
Piyush Srivastava   |   Lucknow   |   Published 05.10.20, 01:25 AM

The Hathras victim’s family on Sunday stressed that they wanted a judicial probe headed or monitored by a sitting Supreme Court or high court judge, voicing fear that a police or CBI investigation might frame them in an “honour killing” case.

The family had expressed the same preference on Saturday after chief minister Yogi Adityanath recommended a CBI probe, as demanded by supporters of the alleged rapist-cum-killers who claim the accused are innocent.

“We don’t see much difference between the CBI and the police. The cases they have failed to solve or manipulated outnumber those they have actually cracked,” the brother of the 19-year-old Dalit victim said.

“But we have complete faith in the judiciary and want a judicial inquiry, either headed by a sitting judge from the high court or the Supreme Court, or monitored by them.”

He added: “The police and other investigators were trying to make it seem a case of honour killing. They grilled my father as though he was behind whatever happened to his daughter. We fear that a CBI probe will go in the same direction.

“But the media are monitoring everything and I’m hopeful that the world is watching the developments closely.”

Four Rajput youths are accused of gang-raping the victim, cutting off her tongue and breaking her neck on September 14. After she died in a Delhi hospital on September 29, the Uttar Pradesh police allegedly hijacked the body, brought it to her village, and burnt it after locking the family at their home.

The victim’s father on Sunday said the forced cremation, facilitated by “petrol” rather than the traditional rituals, went “against Hindusim” and left room for doubt whether the body was indeed his daughter’s.

The girl’s brother had on Saturday collected her ashes from the spot where the police burnt her on a pyre. The father said on Sunday that the ashes would not be immersed in the Ganga until a court had convicted and sentenced the accused.

“We collected the ashes because the local administration was pressuring us. Sometimes we believe that these remains are of my daughter but at other times we doubt it,” he said.

“We don’t know whom the police cremated. They claim it was my daughter. Those who had seen the cremation told us they didn’t see the face. The police had poured petrol on the pyre and burnt the body. We may be Dalits but we are Hindus too, and whatever the police and the state government did was against Hinduism.”

More than 50 local Rajputs on Saturday protested outside the victim’s village, removing their shirts and demanding a CBI probe.

“We want a CBI probe and narco-analysis tests on the girl’s family. Those arrested are innocent,” one of the protesters, Nishant Chauhan, told reporters.

Several BJP leaders too have publicly claimed the accused are innocent, echoing an unofficial “panchayat” held on October 2 by Rajputs from 12 villages that demanded a CBI probe claiming it would exonerate the four youths.

The meeting had also demanded a narco-analysis or “truth serum” test on the victim’s family members. Hours later the government of Adityanath, himself a Rajput, announced such tests on the complainants, accused and the policemen involved in the initial probe, apparently on the basis of a report from the special investigation team.

“We are poor and downtrodden,” the victim’s brother said. “We haven’t got the courage to fight the Rajputs. But the way the media is fighting for justice gives us confidence that the guilty would be punished.”

Bhim Army chief Chandrashekhar Azad met the victim’s family on Sunday afternoon and told reporters he wanted to take them away with him.

“Supporters of the accused are holding panchayats every day within a radius of 2km. They can attack and harm the family anytime,” Azad said.

“The government should either give them Y-category security or allow me to take them to my place (Saharanpur).”

The victim’s father and aunt, who flanked Azad as he spoke, said they were willing to go with the Dalit leader as they were feeling “insecure”.

“I wonder why the victim’s family cannot get security if the government can give security to (actress) Kangana Ranaut,” Azad said.

The Union home ministry last month granted Kangana Y-plus security —10-12 armed CRPF men will guard her round the clock — after she said she felt insecure in Mumbai.

Azad supported the family’s demand for a judicial probe, saying a “government tool” like the CBI couldn’t be trusted.