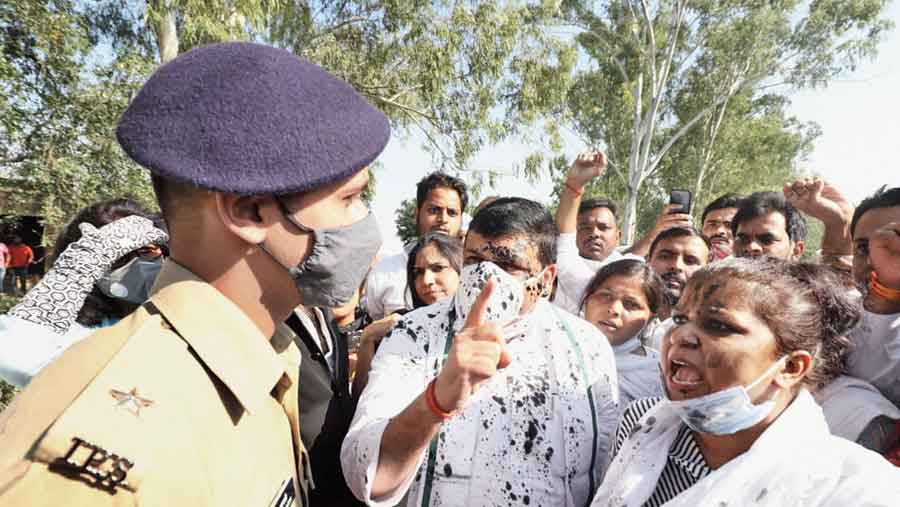 Aam Aadmi Party MP Sanjay Singh was smeared with ink and pelted with stones in the presence of police when he entered the victim’s village in Hathras on Monday. The father of the victim blamed sympathisers of the accused for the attack.
(AAP Twitter image)
Anita Joshua   |   New Delhi   |   Published 06.10.20, 02:26 AM

The United Nations has expressed profound sadness and concern at the continuing cases of sexual violence against women and girls in India, prompting the external affairs ministry to overlook certain complimentary references and describe the statement as “unwarranted”.

“The recent cases of alleged rape and murder in Hathras and Balarampur are another reminder that despite the impressive progress made on a number of social indicators, women and girls from disadvantaged social groups face additional vulnerabilities and are at greater risk of gender-based violence,” UN resident coordinator Renata Dessallien said in a statement.

“The UN in India is profoundly saddened and concerned at the continuing cases of sexual violence against women and girls in India,” the statement added.

Resident coordinators are usually the highest UN official and the chief of the world body’s diplomatic mission in a country.

The statement was issued on a day Uttar Pradesh police lodged at least 19 FIRs across the state against unknown persons on charges ranging from attempt to provoke caste conflict to sedition.

Dessallien, the UN resident coordinator, was appreciative of the steps taken by the government for the safety of women and acknowledged the “Prime Minister’s call for strict action against the culprits”.

The Prime Minister is yet to make any public statement on the Hathras atrocity but Uttar Pradesh chief minister Yogi Adityanath had claimed that Narendra Modi had asked him to take strict action.

The UN official added that it was essential that the authorities ensured the perpetrators were brought to justice speedily, and that families were empowered to seek timely justice, social support, counselling, health care and rehabilitation.

“Entrenched social norms and behaviour of men and boys that lead to gender-based violence must be addressed,” Dessallien said.

The Indian government did not take it well. Reacting to her statement late in the night, external affairs ministry spokesperson Anurag Srivastava said: “Some unwarranted comments have been made by the UN resident coordinator regarding some recent cases of violence against women.

“The UN resident coordinator in India should be aware that these cases have been taken extremely seriously by the government. Since the investigation process is still underway, any unnecessary comments by an external agency are best avoided. The Constitution guarantees equality to all citizens of India. As a democracy we have a time-tested record of providing justice to all sections of our society.”

The UN official’s statement was issued in spite of the Uttar Pradesh government using the services of a public relations firm to offer its spin among foreign and Indian media after the Hathras incident.

The salvo from Europe was more direct and comprehensive.

In a statement on Monday, Arena, the Chair of the European Parliament’s human rights panel, reminded India that as a sitting member of the UN Human Rights Council, the country had pledged to “continue to foster the genuine participation and effective involvement of civil society in the promotion and protection of human rights”.

“Therefore, I call on the Indian government to meet this pledge, in a manner worthy of the global role model it aspires to be. It is high time for India to translate words into action. In this context, I also wish to call on the EU to address these concerns within the EU-India Human Rights Dialogue.”

Pointing out that the rule of law is the very cornerstone of the EU’s relationship with India, Arena referred to the Amnesty International India report on human rights violations committed by Delhi police during the riots in the capital in February. She supported the call for a “prompt, thorough, independent and impartial investigation” into all such violations committed by law-enforcement agencies.

“Marginalised communities, religious minorities, particularly Muslims, a vocal and vibrant civil society and critics of government policies have been under increasing pressure for a long time. Widespread protests over the proposed citizenship verification process and the discriminatory citizenship law amendments have resulted in arbitrary detentions and an unnecessary loss of life. Journalists and other peaceful critics continue to be arrested under draconian counter-terrorism and sedition laws, while human rights defenders are unceasingly and severely targeted by the authorities,” Arena noted.

She also expressed concern over Amnesty International India being forced to halt its work in the country “due to government reprisals”.

The European Union has already raised the Amnesty International India closure with the external affairs ministry through its mission in New Delhi.

In a background note circulated along with the statement, it was pointed out that the 2004 EU-India Strategic Partnership is based on shared values of democracy, the rule of law and respect for human rights. Further, it was pointed out that both countries had endorsed the “EU-India Strategic Partnership: A Roadmap to 2025” during the 5th European Union-India Summit on July 15, reaffirming commitment to promoting the shared values of human rights and fundamental freedoms.

Earlier in January, six different political groupings in the European Parliament had moved separate resolutions against the Citizenship Amendment Act. Together, the resolutions had the backing of 626 members of the 751-member European Parliament. Indian diplomats had to work overtime to defer the vote to March, by which time the pandemic bailed India out of the tight spot.