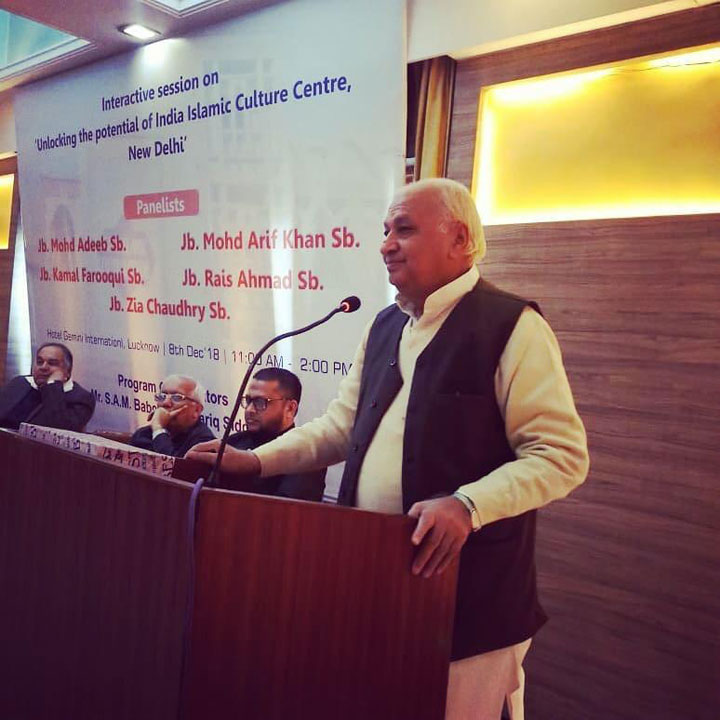 Arif Mohammed Khan alleged that Habib had tugged at the ADC’s shirt to try and reach the governor during his inaugural address
Wikipedia
K.M. Rakesh   |   Bangalore   |   Published 31.12.19, 01:45 AM

Historian Irfan Habib on Monday rejected the Kerala governor’s allegation that he had manhandled the dignitary’s aide de camp during the protest by academics at the inauguration of the Indian History Congress in Kannur on Saturday.

Governor Arif Mohammed Khan had told a Malayalam channel on Sunday that Habib had started “fisticuffs” with his ADC on the dais.

Habib, 88, told reporters he had not assaulted anyone and could not have done so considering his advanced age.

On Saturday, about half the 1,500 delegates had held up placards opposing the Citizenship (Amendment) Act and the National Register of Citizens and chanted slogans against the governor for his criticism of the anti-citizenship-act protesters. It led to the police briefly detaining a few of the demonstrating academics.

“If he (Habib) was so hateful, why did he come there? Didn’t he know that I am the chancellor of Kannur University? It was for him to decide,” the governor told the TV channel.

“It does not mean that if he doesn’t like me or if his politics differs from mine, he starts fisticuffs with my ADC.”

Khan alleged that Habib had tugged at the ADC’s shirt to try and reach the governor during his inaugural address. “The ADC’s ceremonial rope fell down, his shirt opened — it’s all there in the video.”

It’s not clear which video Khan was referring to. Television footage shows Habib climbing onto the stage to ask the governor to “quote (Nathuram) Godse” rather than Mahatma Gandhi, but does not show any fisticuffs. Several delegates have told the media that no scuffles took place.

Habib told reporters: “Everyone saw what happened. It is of course totally false. I am 88; his ADC must have been 35 or 40. You can imagine the falsity of this statement from these facts.”

The historian accused the governor of having falsely attributed to the late Maulana Abul Kalam Azad — scholar, freedom movement stalwart and Congress leader — a derogatory statement about Indian Muslims.

At the opening ceremony, Khan had said: “Maulana Azad had said, in the first convention, ‘For people like you, Partition took all the dirt there (Pakistan), but some slush pits survived’.”

It’s not clear which convention Khan was alluding to and who the “people like you” were.

Habib said: ‘“Indian Muslims are like dirty ponds’ — Azad never made this statement.”

Khan also made adverse remarks against Habib’s stint at Aligarh Muslim University, where the historian has studied and taught. “He has always been like that. You ask in Aligarh, he does not tolerate any difference of opinion,” Khan told the channel.

On Raj Bhavan’s instructions, the police have begun probing the incidents at the inauguration of the three-day History Congress, which concluded on Monday.

Told about this, Habib said: “Well, I may be a criminal but I cannot justify the citizenship act (unlike the governor).”

He added: “They can also remove me as professor emeritus (at Aligarh Muslim University)…. I have received other honours from the Government of India; they can remove those (as well).”

State CPM secretary Kodiyeri Balakrishnan has castigated the governor for “talking politics” in defiance of protocol. “The Sarkaria Commission had recommended that governors stay away from politics. The Congress started misusing the governor’s position; the BJP has strengthened this tendency,” Balakrishnan said in a statement.

T.N. Pratapan, a Congress MP, said Khan had tarnished “the sanctity of his position” and suggested that he “resign as governor and take over as Kerala BJP president”.

“When communalism is spreading like cancer in our country, neither medical doctors nor others can stop it. That huge responsibility is with historians. Our country will survive only if the historians succeed,” he said.