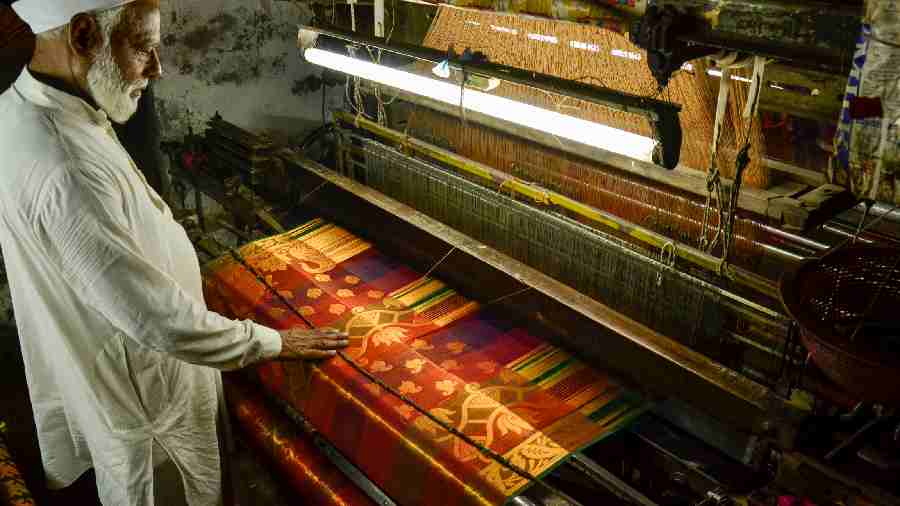 The embroidery is handmade by the fifth-generation weavers of a Muslim family in Gyanvapi.
Representational picture from Shutterstock
PTI   |   Mangaluru   |   Published 21.09.22, 08:47 PM

While Gyanvapi in Uttar Pradesh is in the news for the Hindu-Muslim rift over right to pray, a Muslim family there is presently engaged in weaving a green silk sari with golden embroidery for the idol of goddess Sharada here.

The idol will be installed on the Acharya mutt premises of Sri Venkataramana temple in Car Street here.

The goddess will be draped in the sari, costing about Rs 8 lakh, on the day of 'Shobha Yatra' to be held here on October 6, Sharada Mahotsav Samithi media coordinator Manju Neereshwalya said.

He said the sari is sponsored every year by Sudheer Pai of the Kulyadikars textiles. The embroidery is handmade by the fifth-generation weavers of a Muslim family in Gyanvapi.

Though the goddess is usually adorned with a Benares silk sari with silver zari (thread made of silver) which costs around Rs 2 lakh, this year the sponsor decided to weave golden zari embroidery work for the sari, as this happens to be the centenary year of Sharada Mahotsava, Neereshwalya said.

Sharada Mahotsava was started in 1922 to bring together people during the independence movement.

Devotees and well-wishers are donating a veena and peacock made of gold this year. The goddess will be seen carrying the veena and the peacock placed next to the idol. A silver pedestal will also be dedicated to the goddess during the occasion.