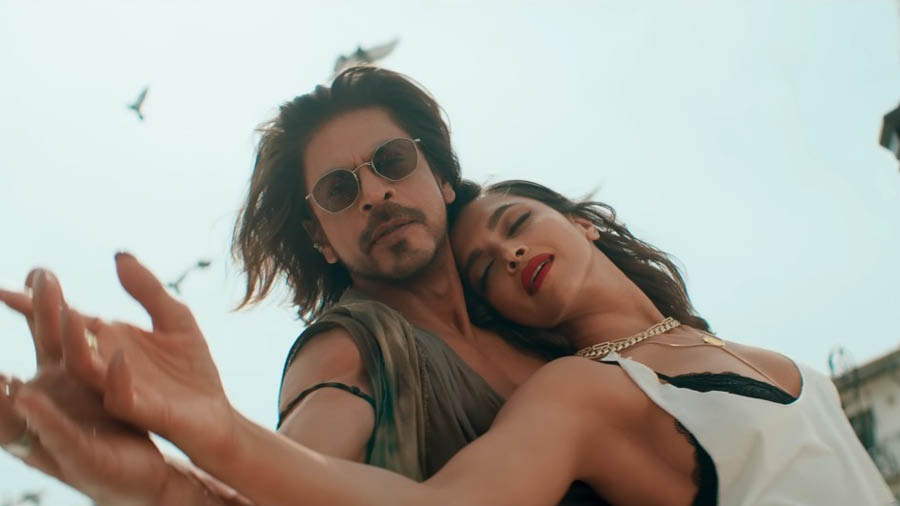 A delegation of multiplex owners in Gujarat on Wednesday met Minister of State for Home Harsh Sanghavi and sought protection to theatres that are scheduled to screen the upcoming Shah Rukh Khan-starrer film 'Pathaan', which is facing opposition from right-wing groups over certain scenes.

Multiplex Association of Gujarat (MAG) president Manubhai Patel said during the meeting the minister assured its representatives of protection to multiplex theatres from groups threatening cinema exhibitors over the release of the movie.

Representatives of the association met Sanghavi in Gandhinagar a week before the film's release and raised concern over threats received by them from various groups which have warned them against screening the movie, which also stars Deepika Padukone.

Meanwhile, the Bajrang Dal said it was firm on its decision to not let the movie hit theatres in Gujarat as a song in the movie "insults" Hindu religion.

Khan and his film 'Pathaan' are facing backlash for showing Padukone in a saffron bikini in the song 'Besharam Rang'.

"The home minister assured protection to theatres from elements threatening cinema exhibitors against the release of 'Pathaan'. There are more than 50 multiplexes in Gujarat, and the movie will be released in almost all of them on January 25," Patel said.

Neeraj Ahuja, General Manager of Ahmedabad-based Wide Angle Multiplex who was part of the delegation, said Sanghavi has issued instructions to the police regarding full protection to multiplexes screening the movie and strict action against those who protest and create ruckus.

In a letter sent to Sanghavi earlier, the association said the right forum for anybody having reservation or objection about the movie would be to approach either official authorities, Government of India or courts because the movie has been given clearance by the Central Board of Film Certification.

There are many groups which are "illegally targeting cinema exhibitors based on their own understanding and agendas," the letter said, while seeking the minister's intervention and support for unhindered release of the much-awaited Bollywood film.

North Gujarat president of Bajrang Dal Jwalit Mehta said the use of the word "Besharm" in a song in the movie is an "insult" to the Hindu community.

"The Hindu community has expressed its anger over the song (Besharam Rang). It has become a fashion in Bollywood to promote films by insulting Hindu religion. So, this time round, the Bajrang Dal will not pardon anyone and not let anyone release the film," he warned.

"Also, the perversion caused among men by viewing the scantily dressed heroine of the film will affect school-going girls and those who live alone and go out for studies," he said in a video statement.

The movie courted controversy immediately after the release of the song 'Besharam Rang', featuring Khan and Padukone, last month. Madhya Pradesh Home Minister Narrottam Mishra had then objected to Padukone's attire in the song and called for rectification.

The Madhya Pradesh Ulema Board has sought a ban on the movie for "misrepresenting Islam."