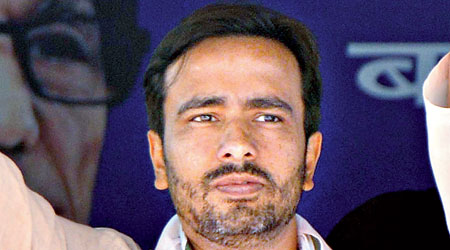 Rashtriya Lok Dal president Jayant Chaudhary on Tuesday said the entire state machinery under the Yogi Adityanath government is trying to suppress the truth of what happened in Lakhimpur Kheri and clamping down on the Opposition.

The RLD chief, one of the few leaders to be able to reach the Uttar Pradesh district where farmers and a journalist were mowed down by a minister’s SUV on Sunday, said he had to employ “guerrilla tactics” to do so.

“Reaching Lakhimpur was a tough task because Yogi has put the entire government machinery to work towards thwarting the Opposition. There needs to be a separation between the state and the party which is not there in UP… from the district magistrate to state-level officials, police, it seems everyone has taken membership of the BJP,” Chaudhary alleged in a phone interview to PTI.

Chaudhary, who took 13 hours to reach Lakhimpur Kheri from Delhi, several hours more than it would take to cover the 420km-odd distance, met the families of some of the farmer victims.

All roads to Lakhimpur Kheri, about 130km from Lucknow, have been blocked for Opposition leaders.

Congress leaders Priyanka Gandhi Vadra and Deepender Hooda are in detention, Chhattisgarh chief minister Bhupesh Baghel was not allowed to step out of Lucknow airport, Punjab deputy chief minister Sukhjinder Singh Randhawa was detained at the state border, and Samajwadi Party chief Akhilesh Yadav has not been allowed to travel to the district.

It is a “worrisome trend” that no one in the bureaucracy has raised questions over orders given by the political class, Chaudhary said, adding that he was surprised to hear additional director-general (law and order), Prashant Kumar, saying that political people are not allowed in the district.

Giving details of his journey,  Chaudhary said it was “tough” and he reached on Monday evening.

“I had to change many roads as soon as I got advance information that a particular road had been sealed. We could not communicate with anyone as we had switched off our telephones. I had to send people who were with me on a different route, so a lot of guerrilla tactics had to be employed… it is again frightening to have to do those things,” he said.