GST compensation to states must be extended by three years, says Congress

Indian economy cause for extreme concern, time for reset, says Chidambaram; promises sensible policies minus the hyperbole of the Modi government 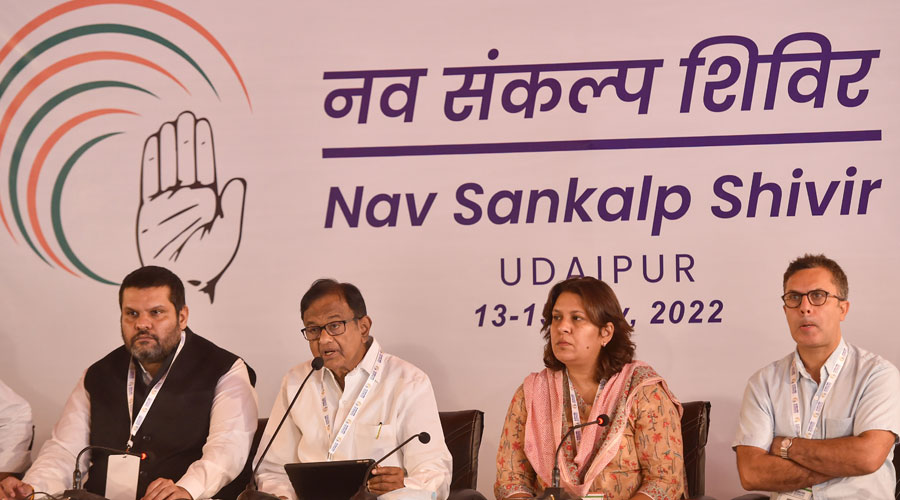 Expressing "extreme concern" over the state of the economy, senior Congress leader and former finance minister P Chidambaram called for a recalibration of the economic policies while taking into account global and domestic developments.

Addressing a press conference here on Saturday, he also called for a comprehensive review of fiscal relations between the Centre and the states and demanded that the Goods and Services Tax (GST) compensation to states be extended for a period of three years.

Chidambaram, who is the convener of the group deliberating on economic issues at the Congress' three-day 'Nav Sankalp Chintan Shivir', said the government has completely failed on the economic front and is clueless on how to set things right.

“The government is fuelling inflation and unemployment and the fiscal position of states is fragile,” he charged, stressing the need to undertake urgent remedial measures.

The Congress leader said the external situation has added to the pressures on the economy. "The government appears clueless on the ways to deal with these developments," he said.

Chidambaram dismissed the government's claim that the Ukraine-Russia war has fuelled inflation, saying the rise in oil prices cannot be blamed for the high inflation as a similar situation prevailed even before the war.

"The Ukraine war has added to our problems, but we should have taken pre-emptive action. I don't think simple lame excuses like the Ukraine war can explain why there is high CPI and WPI inflation," he said.

Chidambaram said the Congress will plead for sensible economic policies.

"What the Modi government is doing is another repeat of India Shining. We are confident we will be able to put forward an economic roadmap that will appeal to the people and defeat the hyperbole and exaggeration of the Modi government," he said.

The former finance minister said a Congress-led government ushered in a new era of liberalisation in 1991. The country has reaped enormous benefits in terms of wealth creation, new businesses and new entrepreneurs, a huge middle class, millions of jobs, exports and lifting 27 crore people out of poverty during a 10-year period.

"After 30 years, it is felt that taking into account global and domestic developments, it may be necessary to contemplate a reset of the economic policies," he told reporters.

“The world and India have changed in the last 30 years and there is a need for fine-tuning the policies,” Chidambaram noted. "We believe that important changes in economic policies will be required in the light of climate change and the need for mitigation and adaptation," he said.

Chidambaram said the reset of economic policies must also address the questions of rising inequalities, extreme poverty among the bottom 10 per cent of the population, India's rank in the Global Hunger Index 2021 (101 out of 116 countries) and evidence of widespread nutritional deficiency among women and children.

A comprehensive review would also be justified by the health and education outcomes as revealed by the Annual State of Education Report 2021 (ASER 2021) and the National Family Health Survey-5 (NFHS-5), he said.

"We believe that a recalibration of economic policies can influence health and education outcomes," he added.

Claiming that the consequences of a "poorly drafted" and "unfairly implemented" GST are for everyone to see, Chidambaram said, "the time is ripe for a comprehensive review of Centre-states fiscal relations."

"The states' fiscal position is fragile like never before and needs urgent remedial measures," he asserted, claiming there is a complete breakdown of trust between the Centre and the states.

He said there has been a unanimous demand by state governments to extend the GST compensation period for three years.

“We would strongly disapprove if any attempt is made by the central government or the Union Finance Minister to railroad the GST council and prevent it from recommending an extension of the GST compensation period by another three years. We will strongly oppose that and we will insist that it be extended,” Chidambaram said.

He said the Congress believes that the Indian economy and the Indian workforce must be prepared to adapt to the ways in which business and trade will be conducted in the 21st century with greater use of automation, robotics, machine learning and artificial intelligence.

Chidambaram said a slower rate of growth has been the "hallmark" of the present government in the last eight years, and the post-pandemic recovery has been "indifferent and halting".

Asked if the Congress would come up with a roadmap of policy measures that could help in bringing the economy back on track, he said this government does not listen to anyone.

"We will prepare a set of policies that will serve the interests of India and we will take it to the people," he said, adding that the government won't be ready to listen to anyone.

Chidambaram hoped that the deliberations over the three days and the decisions that will be taken by the Congress Working Committee (CWC) will make a significant contribution to the nationwide debate on the economic policies that will best serve the interests of the country and its people.

The discussions at the 'Chintan Shivir', which began on Friday, will continue on the second and third day as well and the conclusions will be recorded in the form of a declaration. A draft of the declaration will be discussed at the CWC meeting to be held here on the third and last day of the conclave.