Grim funeral for a lost youth 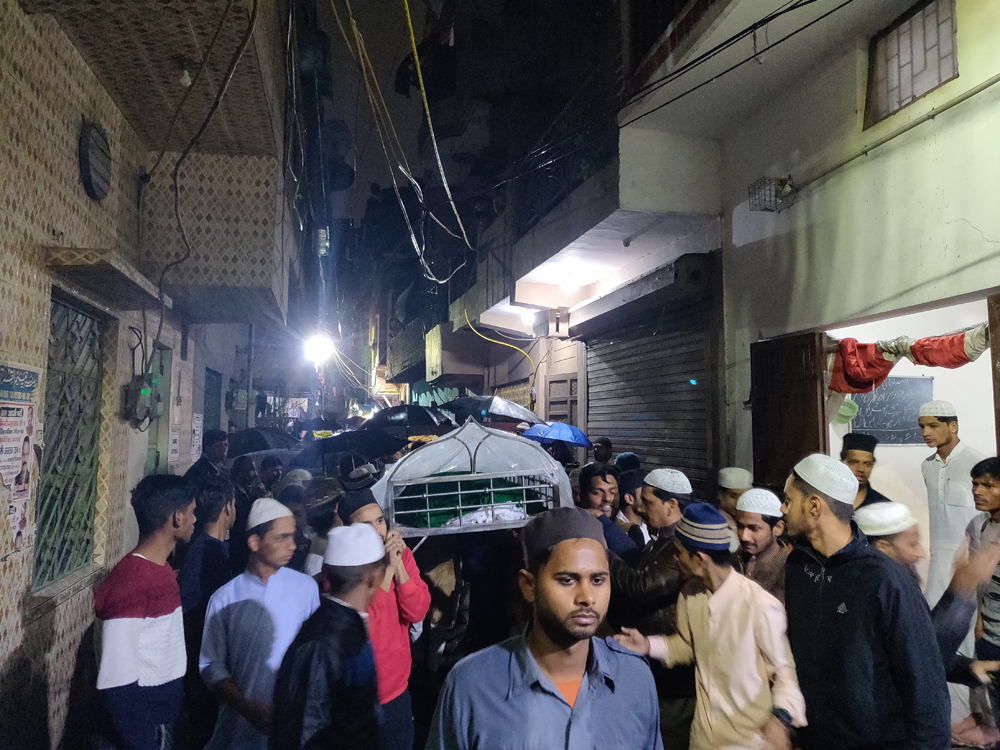 In one corner of northeast Delhi’s Kardampuri, people had gathered to receive 23-year-old Faizan’s dead body. The ambulance was on its way as the number of locals swelled outside his home in Gali No. 5. Women huddled on a veranda outside Faizan’s home, mourning his death.

Faizan had died on Thursday. A video clip had gone viral, which showed him and four other young men lying injured on the road even as a group of policemen forced them to sing the national anthem.

Soon after the ambulance arrived, his body was taken to a folding bed placed outside his home. Covered in white shroud, only his face was visible; it had marks of injury. Men, women and children walked past his bed to take a last look at him.

It had started to rain as people prepared for his burial in a graveyard nearby.

According to multiple accounts, local residents saw Faizan near the protest site near the Kardampuri ‘ghetto’ on Monday, soon after stone pelting was reported at Maujpur further down the road. He had gone to fetch his mother as the stone pelting had inched closer. To escape the tear gas, Faizan ran in the direction of the violent mob and police instead of towards Kardampuri, close to his own people. Nobody knows what happened then.

When the protector turns perpetrator, where do we go?!
Shame on @DelhiPolice for disrespecting the value of human life. Is this how the Delhi Police fulfills its Constitutional duty to show respect to our National Anthem?
(Maujpur, 24 Feb)#ShameOnDelhiPolice #DelhiBurning pic.twitter.com/QVaxpfNyp5

In the minute-long video clip, five bleeding and injured men are seen being filmed by men in uniform and being told to sing the national anthem. As one of them sings a portion of the anthem lying on the ground, others are either writhing in pain or are seemingly unconscious. The policeman are seen kicking them, hitting them with baton or poking their mouths.

Dressed in a blue shirt and black pants — covered in blood — Faizan can be seen lying unconscious close to the road divider. There is blood on his head and face as well.

The fact-checking portal, Alt News, said it had verified the video with the help of a second clip which showed the same incident from a raised location from far. In that video, eight policemen can spotted at the location.

“We found out the same day he was caught around 9pm, even before the video started circulating,' said Naseem, Faizan’s elder brother.

Naseem’s family was informed by someone that his brother was beaten up by the police and then taken to GTB hospital in Dilshad Garden.

“When we went to the hospital looking for him, he wasn't there. We later traced him to Jyoti Nagar police station,' said Naseem.

He told The Telegraph Online that the police had refused to release Faizan despite his grave injuries. Naseem said he was released late on Tuesday after being kept for more than 24 hours. The police is accused of torturing the wounded in their custody.

His mother had taken Faizan to LNJP Hospital near Delhi Gate the next day after a local doctor, Khaliq Ahmed Sherwani, told the family that his blood pressure was low and he had serious head and internal injuries.

Documenting witness accounts, The Telegraph reported earlier today that Delhi beat up wounded victims in the violence that lasted four days. The death toll rose to 43 on Saturday and more than 250 people were reportedly injured since Sunday.