Government wakes up to slowdown

GDP growth in January-March had tumbled to a near 5-year low of 5.8% 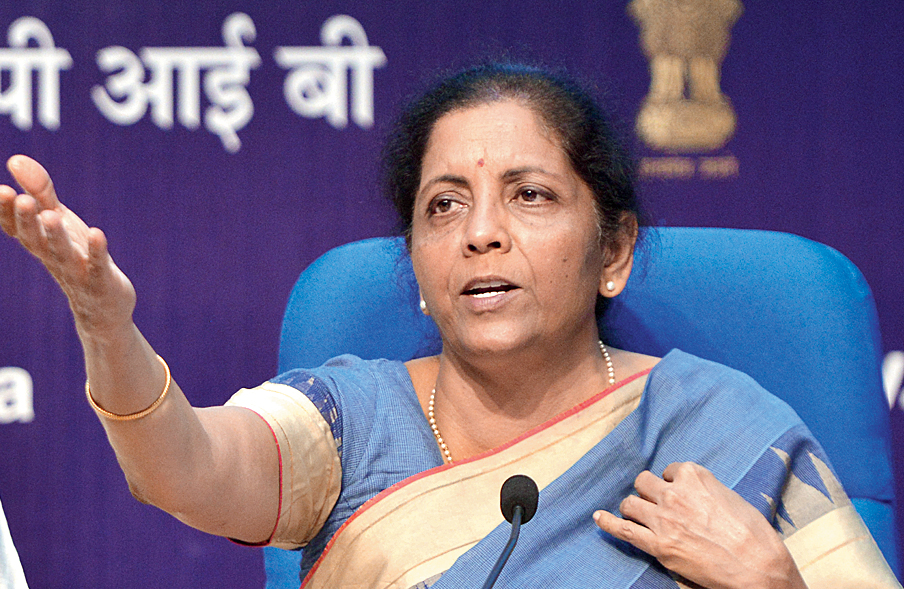 The Narendra Modi government on Friday rolled back a controversial tax surcharge on foreign portfolio investors, came up with a slew of measures to revive housing finance companies and the automobile industry, assured speedy tax refunds to medium and small companies, and promised to stop harassing taxpayers in an effort to jump-start the faltering economy.

Finance minister Nirmala Sitharaman unveiled the measures at a news conference in the evening, adding that the government would come out with more announcements in the next few weeks to counter the crippling effects of the economic slowdown.

GDP growth in January-March had tumbled to a near five-year low of 5.8 per cent. Most analysts expect growth to fall further when the Central Statistics Office comes out with the data for the April-June quarter on August 30.

The government was careful not to strain its resources while announcing the new measures, which fell far short of India Inc’s demand for a fiscal stimulus package.

The removal of the tax surcharge on the FPIs will entail a revenue loss of Rs 1,400 crore.

The imposition of the levy in the July 5 budget had sparked an outflow of $1 billion last month and sent stock markets into a tizzy.

“The enhanced surcharge on FPI goes,” Sitharaman said. “In other words, the pre-budget position is restored.”

Last month, Sitharaman had stood her ground while battling the demand for a rollback of the tax. But now that she has backed down, there is no guarantee that the funds will flow in as investors remain wary of India’s capricious policymaking even as a welter of global cues have made them reluctant to commit funds to emerging markets.

The government said it would provide an additional liquidity support of Rs 20,000 crore to housing finance companies that will be routed through the National Housing Bank, effectively increasing funds to this sector to Rs 30,000 crore.

Banks will receive an immediate, upfront capital infusion of Rs 70,000 crore for which a provision had been made in the recent budget. The government hopes that the fund injection will create the headroom for additional lending worth Rs 5 lakh crore, benefiting corporate houses, retail borrowers and small traders.

The government is also hoping to persuade banks to cut their lending rates by embracing a new formula that will include an external benchmark for pricing loans, raising the prospect for lower EMIs on housing, vehicle and personal loans.

The automobile industry, which has been convulsed by the economic slowdown and saw sales tumble to a 19-year low in July, has been granted the benefit of an additional 15 per cent depreciation that will be available on all vehicles bought till March next year.

The new 30 per cent depreciation rate is expected to bring down the inventory pileup at dealerships that had forced the industry to pare production and axe jobs. The government also said the old BS-IV vehicles purchased during this period would be allowed to operate the full period of their registration, which is usually 15 years.

The finance minister said that a new regime of “faceless” tax scrutiny would be introduced from October 1 which, she hoped, would end the growing complaints of tax harassment.

She claimed the tax collection targets set out in the budget — an over 23 per cent increase in corporation tax at Rs 766,000 crore, for instance — were achievable and there was no need for the tax authorities to harass firms or individuals.

India Inc had reacted with outrage and accusations of tax terrorism after Café Coffee Day founder V.G. Siddhartha reportedly committed suicide, leaving behind a letter in which he accused tax officials of harassing him — a charge the income-tax department has strenuously denied.

The government also said it would no longer treat violations of corporate social responsibility (CSR) funding of welfare projects as a criminal offence, an issue that had caused a lot of heartburn.

Companies with a net worth of Rs 500 crore or more — or a turnover of over Rs 1,000 crore — are required to set aside 2 per cent of their average profits in the past three years for CSR projects.

A recent amendment in the Companies Act had proposed a three-year jail term for key officials in companies that fail to commit funds to these projects. This will now be treated as a civil liability.