‘String of missteps, air of complacency and denial dogged government’s response to pandemic’ 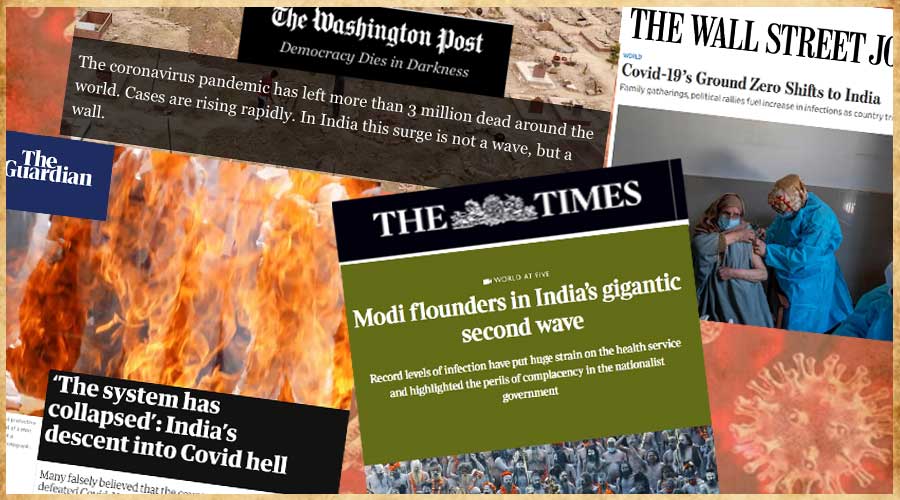 The global press has turned its guns especially on the Central government for having been complacent and not being prepared for the second wave.
The Telegraph Online
Paran Balakrishnan   |   Published 23.04.21, 01:04 PM

For image-conscious Prime Minister Narendra Modi, the foreign press’s reviews of his handling of the coronavirus pandemic must make devastating reading. Modi has gone from hero to minnow in fighting Covid-19 in the eyes of the world press as daily infections have soared to successive new records. After appearing to have skilfully ridden the first Covid wave with one of the world’s strictest national lockdowns, Modi has been engulfed by the second, according to the verdict of the foreign media.

Headlines like: “Modi flounders in India’s gigantic second wave,” in The Times, London, have been typical of the coverage that the Prime Minister has been receiving as the daily count of new Covid cases has barrelled past 300,000. The Times has blasted the government’s response to the latest coronavirus wave, saying it has “underscored the air of complacency and denial that have dogged his government’s response to the crisis.”

“The system has collapsed: India’s descent into Covid hell,” said an equally blistering headline in The Guardian, which led its main story with a photo of flames soaring high in a crematorium. The newspaper added: “Many falsely believed that the country had defeated Covid. Now, hospitals are running out of oxygen and bodies are stacking up in morgues.” 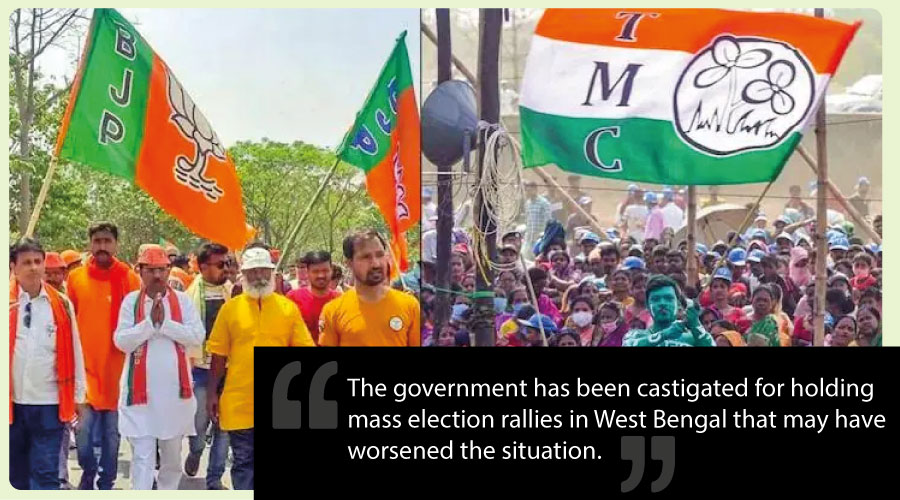 The world’s gaze has turned on India because of the extraordinary surge in cases and because a huge chunk of the new cases reported globally in the last 24 hours have emerged here. India reported 314,644 of the new cases that were reported Thursday morning, nearly half of the total worldwide tally.

International coverage which had focused on Brazil as the global Covid disaster zone has now zeroed in on India as the place where the pandemic is raging out of control.

The global press has turned its guns especially on the Central government for having been complacent and not being prepared for the second wave. Also, the government has been castigated for holding mass election rallies in West Bengal that may have worsened the situation. The decision to allow the mega Kumbh Mela to go ahead has also been roundly denounced as reckless. International newspapers have splashed their front pages with pictures of huge crowds of mask-less devotees pressed against each other and accused the Indian government of lacking the courage to call the gathering off for fear of alienating their Hindu supporters.

The Times which makes a ferocious attack on the Central government says: “The speed and ferocity of the second wave have exposed a string of missteps at the start of the year, repeating the mistakes of 2020 and making new ones, to leave Indians facing a tsunami of infection that has pushed the country to the brink of collapse.” 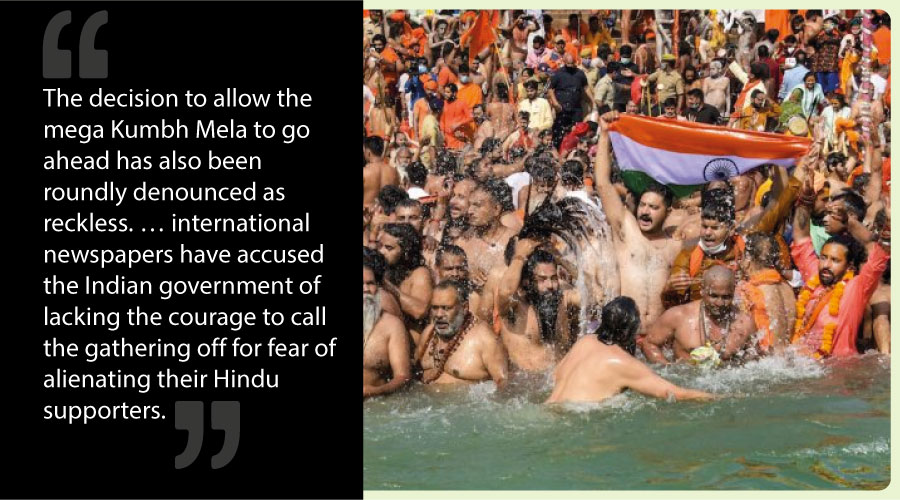 It also talks about Modi, mask-less, at a West Bengal election rally attended by hundreds of thousands of voters, also not wearing masks, declaring that, “In all directions, I see huge crowds of people….I have never seen such crowds at a rally.”

The Financial Times departed from its usual sober style to describe devastating sights of people dying while waiting for hospital beds, the disastrous oxygen shortage and apocalyptic scenes of funeral pyres on the banks of the Ganges. It said the latest wave was “sparking a health crisis and human tragedy in India that is far surpassing anything seen last year.” FT also carried detailed charts about the wave of infections, including ones from each state showing rising positivity rates, which indicate the infections are likely to get worse.

FT, too, blamed the government for the devastating second wave, saying: “The devastation has sparked outrage at the lack of preparation among officials who believed the worst of the pandemic was over.”

The Washington Post led one of its stories with an aerial shot of a Muslim graveyard in Uttar Pradesh showing a large number of freshly filled graves. It said: “In India, this surge is not a wave but a wall.” It added: “In some cities, crematoriums are running their furnaces round the clock.”

The Washington Post divided the blame between, “more contagious variants of the virus, as well as an early relaxation of restrictions and a slow-moving vaccination campaign.” In another story, it also described damaging vaccine shortages in various states. 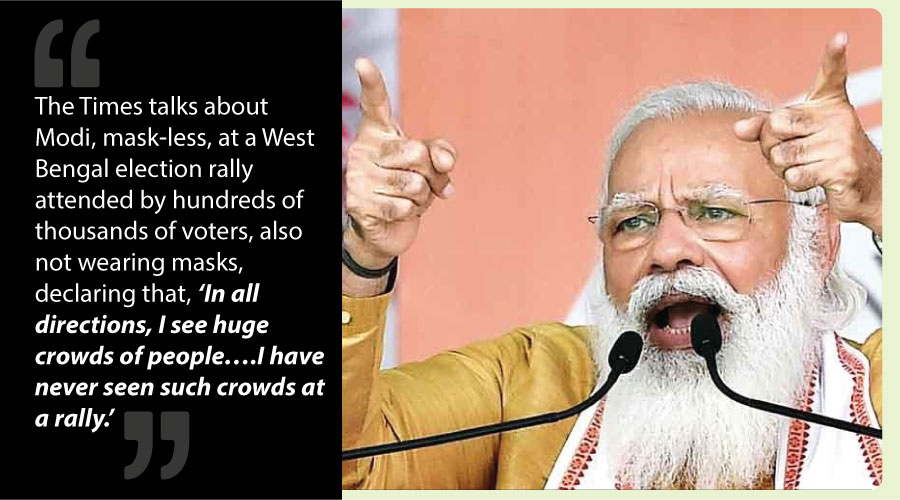 The Wall Street Journal noted that, worryingly, Covid-19 has become trickier and tougher to handle because India is lagging behind on genome sequencing to identify different, fast-spreading mutations that have emerged in recent weeks. It describes India as “ground zero for the pandemic.”

The Journal also quotes researchers who point out that India’s vast population numbers could give the pandemic new legs globally. “With its population of more than 1.3 billion people and skyrocketing infections, India has a higher chance of developing variants, which may take root and spread beyond its borders,” it quoted one researcher as saying.

The WSJ also blames the early hubris that the virus had been defeated for the rate of low genome sequencing, saying: “Many testing facilities, which would provide positive Covid-19 samples to the labs, were dismantled after Delhi prematurely declared victory over the pandemic.”

In the last two days, the international press has turned special attention to the countrywide oxygen shortages and the Nashik hospital disaster where 24 patients died after an oxygen tank leak. The New York Times said: “As supplies of hospital beds, oxygen and vaccines run low, criticism of the government is building.” The media paints Modi as having been lulled into complacency over having apparently kept infections to a minimum in the first wave. It will take a giant PR operation to turn around the global perception that Modi has failed badly in failing to subdue the second wave.