The number of active patients nationwide ballooned above 2.29 million, more than double the peak count during last September 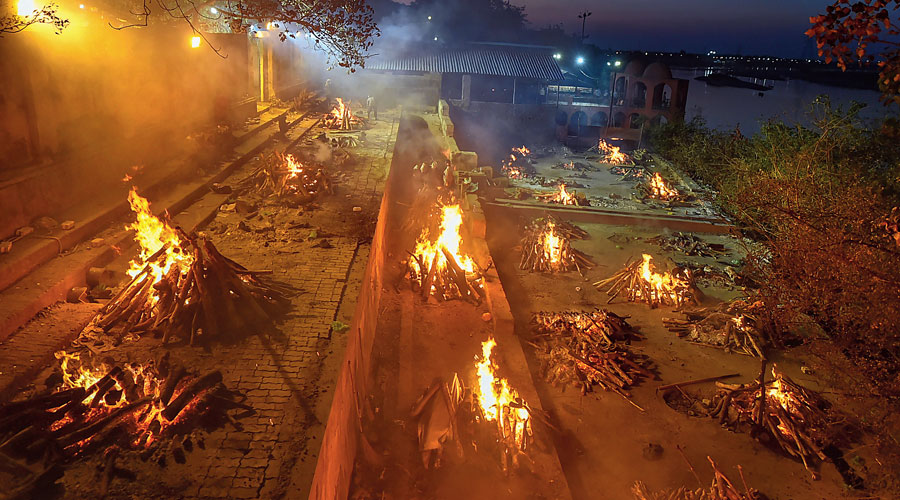 The Centre failed to anticipate the second Covid-19 wave despite warning signals and omitted to take steps that could have mitigated the devastation, a top government researcher has said, agreeing with other experts that India is paying the price for complacency.

The health researcher, a member of the Centre’s national task force on Covid-19, said the surge and the nationwide bed and oxygen shortages had resulted from a complacency that ignored data from India and elsewhere suggesting “a big wave” was possible.

“It is frustrating and it is sad — what’s going on cannot be just abruptly stopped,” the researcher, who requested not to be named, told The Telegraph on Thursday.

“There were indications a big wave could hit us, but that knowledge was not translated into more preparedness or strong public warnings.”

“We can now ask among ourselves: who’s responsible? Is it the health ministry, is it the Indian Council of Medical Research, is it the government? All I’d say is: collectively we have failed,” said the researcher, accepting the blame that some health experts have hurled.

In contrast, the health ministry has been reluctant to discuss the subject.

“Today is not the time to go into why did we miss, or did we miss, did we prepare? Today is the time to jointly face the pandemic,” health secretary Rajesh Bhushan said on Wednesday, when asked at a media briefing whether India had missed anticipating the second wave.

“Once we have faced it and emerged out of it successfully, then probably with the advantage of hindsight we would be able to deliberate on this. Today all the energies of the Union government and the state governments are focused in a collaborative manner to tackle this, to save precious lives, and to ensure that our health system is strengthened.”

Several senior health officials have attributed the second wave to people’s laxity in wearing masks and maintaining physical distance, but the health researcher said it would be unfair to point fingers at the public.

“You cannot blame people. People will do what they like to do and what they are encouraged to do. People need appropriate guidance, appropriate messaging,” the researcher said.

“We were not able to translate the available data into strong enough cautionary messages for the public.”

The researcher said an ICMR survey in January had found that only 25 per cent people had already been infected, implying that 75 per cent of the population was still susceptible to a future wave.

“We also knew from Europe and the US that second waves could be bigger than the first.”

The researcher, echoing concerns aired by other health experts, said that after the epidemic shrank between October and December and the daily counts of new cases fell steadily, the government did little to curb the crowding that occurred at election rallies and at the Kumbh Mela.

As tens of thousands gathered at the Kumbh and at election rallies every day, health officials remained largely silent except for issuing cursory advisories about mask-wearing and maintaining physical distance.

Amid the bed and oxygen shortages, at least two hospitals in Delhi on Thursday appeared so close to running out of oxygen that their administrators were considering asking critically ill patients to leave and look for beds in other hospitals.

“What we’re seeing happen was not inevitable or unavoidable,” said Ramanan Laxminarayanan, an economist and epidemiologist and founder director of the Centre for Disease Dynamics Economics and Policy, a research think tank in the US and India.

“Organising more oxygen should have been part of the preparedness process, and preparing with thousands of beds in stadiums was also possible.”

Some health experts say it makes little sense to split hairs over who deserves more blame, the political leaders or the experts tasked with guiding them.

“This is not a government that tolerates dissent. If the experts don’t tolerate (the official) line, they’d be out. The buck stops with whoever is elected,” a health expert said, also requesting anonymity.

Oxygen runs out, 5 die in UP