He tried to flee after highway accident, say cops 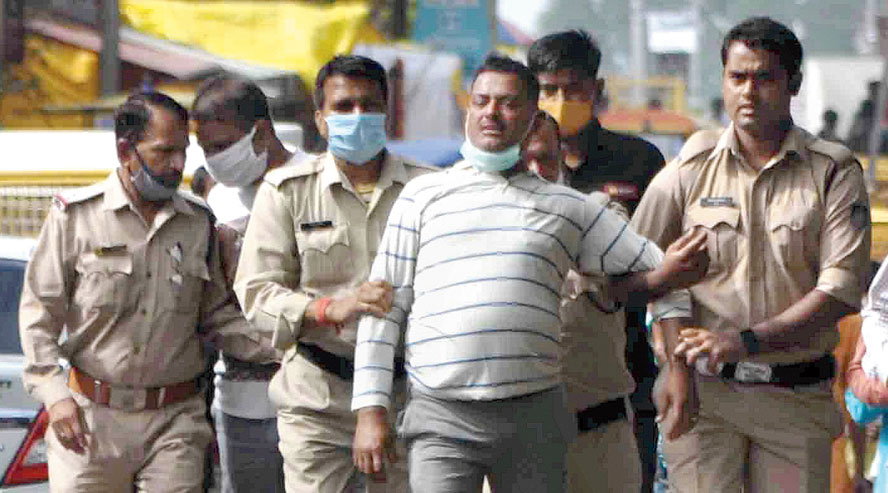 Gangster Vikas Dubey, accused of masterminding the ambush and killing of eight policemen, was killed in an encounter after a road accident early on Friday morning while being taken to Kanpur in Uttar Pradesh from Madhya Pradesh, where he was arrested on Thursday.

Senior superintendent of police (Kanpur) Dinesh Kumar P. said that the accident took place on Friday morning when it was raining heavily and the police vehicle overturned near Kanpur.

Vikas was shot dead, like many of his accomplices who, according to the police, had also tried to escape from custody.

“Vikas snatched the pistol of one of the Special Task Force men escorting him and tried to run but was surrounded. Four policemen were injured in the accident. Vikas Dubey has been killed in a police encounter," said Mohit Agarwal, Inspector General, Kanpur.

"The police team caught up and surrounded him and tried to get him to surrender, but he refused and started firing. The police had to fire back in self-defence," Kanpur police said in a statement.

"Vikas Dubey was injured and taken to hospital. He died during treatment," the statement added.

ADG Kanpur range J.N. Singh confirmed that Vikas “sustained injuries" but did not say to what extent, saying it would be revealed in the post-mortem report.

The car in which Vikas Dubey was being taken was one of three in a convoy.

The police version came amid questions on the encounter, the latest of several over the past few days. Over the last week, five of Dubey's aides had been killed.

Samajwadi Party supremo Akhilesh Yadav raised questions on Vikas’ encounter killing, saying the car did not topple but it was an effort to save the government from toppling if facts came to light.

"Darasal ye car nahi palti, raj khulne se sarkar palatne se bach gayi hai," (Actually, the car did not topple. It is an effort to save the government which would have toppled if facts came to light)," Yadav said in a tweet in Hindi.

Congress spokesperson Randeep Surjewala too voiced Yadav’s opinion, saying that the encounter was carried out to save the UP government.

In a tweet, Surjewala asked what information did the criminal (Vikas Dubey) have which would expose the state government.

Congress general secretary Priyanka Gandhi Vadra also took a swipe at the UP government over the encounter, saying while the criminal has gone, what about those protecting him.

In a tweet in Hindi, the Congress leader said, "The criminal has gone, but what about the crime and those protecting him.”

Earlier, Gandhi had demanded a CBI probe to ascertain the facts about the "grant of protection" to Dubey.

The Congress general secretary had also accused the BJP government in Uttar Pradesh of "complete failure" in handling the Kanpur ambush case.

She had alleged that the chain of events in the case exposed the chinks in security and hinted at collusion.

Eight policemen, including DSP Devendra Mishra, were ambushed in Bikru village in Chaubeypur area of Kanpur when they were going to arrest Vikas and fell to bullets fired from rooftops shortly after midnight on July 3.

He was on the run since then and was arrested from a temple in Ujjain on Thursday.