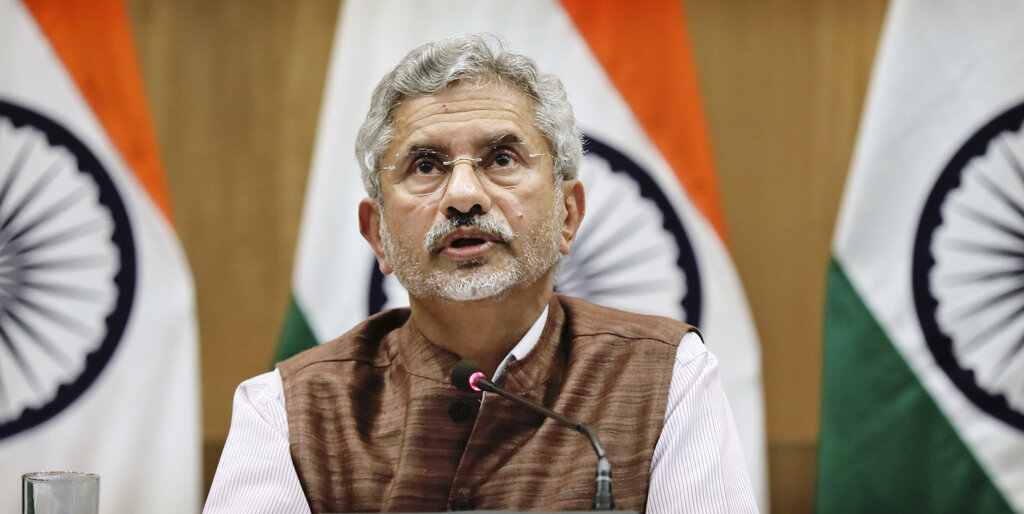 External affairs minister S. Jaishankar and his counterpart Chinese Wang Yi held a telephonic conversation in the wake of Monday night's violent clash between the two armies in Galwan Valley in which 20 Indian Army personnel including a Colonel were killed.
AP
PTI   |   New Delhi   |   Published 17.06.20, 06:19 PM

Chinese Foreign Minister Wang Yi spoke to External Affairs Minister S Jaishankar and the two leaders agreed to "cool down" tensions on the ground "as soon as possible" and maintain peace and tranquility in the border area in accordance with the agreement reached between the two countries, an official statement said here.

The telephonic conversation between the two ministers came after 20 Indian Army personnel were killed in the clashes with Chinese troops in the Galwan Valley in eastern Ladakh on Monday night, the biggest military confrontation in over five decades that has significantly escalated the already volatile border standoff between the two countries.

During the telephonic conversation, Jaishankar conveyed to Wang India's protest in the strongest terms on the violent face-off and said the unprecedented development will have "serious impact" on bilateral ties. He asked the Chinese side to reassess its actions and take corrective steps, the Ministry of External Affairs said in a statement in New Delhi.

"The Chinese side took pre-meditated and planned action that was directly responsible for the resulting violence and casualties. It reflected an intent to change the facts on ground in violation of all our agreements to not change the status quo," Jaishankar told Wang.

The Chinese Foreign Ministry said in a statement here that the two sides agreed to deal "fairly" with the serious events caused by the conflict in the Galwan Valley, jointly abide by the consensus reached at the military-level meetings between the two sides, "cool down the situation on the ground as soon as possible", and maintain peace and tranquility in the border area in accordance with the agreement reached so far between the two countries.

During the conversation, Wang said the two sides should follow the important consensus reached by the leaders of the two countries and strengthen the communication and coordination on the proper handling of the border situation through the existing channels so as to jointly maintain peace and tranquility in the border area, according to the statement.

India on Tuesday said the violent face-off between the armies of India and China in eastern Ladakh was the result of an attempt by the Chinese side to unilaterally change the status quo in the region.

The Ministry of External Affairs said both sides suffered casualties that could have been avoided had the agreement arrived earlier at the higher level been scrupulously followed by the Chinese side.

Wang emphasized that both China and India are emerging powers with a population of over one billion people, and accelerating "our own development and revitalisation is our respective historical missions".

For this reason, mutual respect and mutual support is the right direction for the two sides, which is in the long-term interests of the two countries; "mutual suspicion and mutual friction are evil paths, and contrary to the fundamental aspirations of the two peoples," he said.

The Chinese foreign minister also alleged that on the evening of June 15, the Indian front-line frontier troops "blatantly broke the consensus" reached at the military-level meeting between the two sides.

Once the situation in the Galwan Valley has calmed down, they "crossed the LAC again and deliberately provoked and violently attacked" the officers and soldiers who negotiated on the spot, leading to fierce physical clashes, resulting in casualties, he claimed.

Wang demanded the Indian side to conduct a "thorough investigation" on this, "severely punish those responsible" for the incident, "strictly control the frontline troops", and "immediately stop all provocative actions" to ensure that such incidents cannot occur again.

"The Indian side must not misjudge the current situation, and must not underestimate China's firm will to safeguard the territorial sovereignty," he added.

A large number of Indian and Chinese troops have been engaged in an eyeball-to-eyeball situation in Galwan Valley and certain other areas of eastern Ladakh for the last five weeks, including in Pangong Tso, Galwan Valley, Demchok and Daulat Beg Oldie in eastern Ladakh.

Monday's face-off was the biggest confrontation between the two militaries after their 1967 clashes in Nathu La when India lost around 80 soldiers while over 300 Chinese army personnel were killed in the face-off.

The Indian Army has been fiercely objecting to the transgressions, and demanded their immediate withdrawal for restoration of peace and tranquillity in the area. Both sides held a series of talks in the last few days to resolve the row.