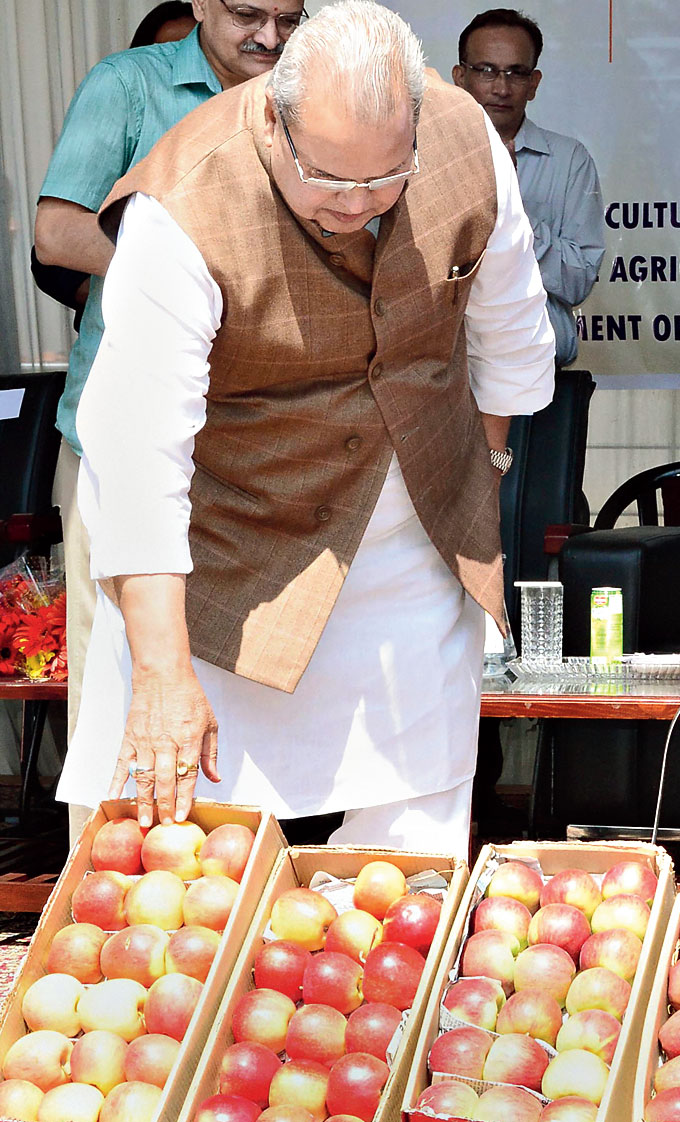 The governor’s administration on Thursday notched up its first successful outreach in weeks, with dozens of fruit growers turning up at the official launch of a market-intervention price scheme for the procurement of 12 lakh tonnes of apple.

It has generally been hard for the government to draw people to official programmes because of the public anger at the August 5 revocation of Jammu and Kashmir’s special status.

While the fruit growers’ attendance of the event does not signify approval of the amendment of Article 370, it suggests that some people may be tempted in future by the government’s so-called development agenda.

The continued shutdown since August 5 has hit businesses, transporters and tourism badly. The apple growers too are finding it difficult to take their produce to markets outside the Valley.

Governor Satya Pal Malik said the government would over the next six months procure 12 lakh tonnes of apple, that is, 60 per cent of the Valley’s production.

“This is a wonderful scheme and will benefit seven lakh families, or 35 lakh people, which is 60 per cent of (the Valley’s) population,” he said.

“The state produces 20 lakh tonnes of apple, amounting to 75 per cent of the country’s apple crop. They (the apple growers) earn Rs 8,000 crore but they enjoyed no security. The prices would go up and down; sometimes they would get it (good prices) and sometimes not.”

Malik said that C-grade apples — 40 per cent of the produce — had been the worst hit, fetching farmers Rs 3 to Rs 7 a kilo, and claimed the market intervention would help them obtain 1.5 to three times that price.

He said the scheme would raise the Valley apple growers’ income by about Rs 2,000 crore.

The apple growers, who had come from various districts including apple-rich Baramulla and Shopian, praised the government’s initiative.

Mohammad Yousuf Dar, who identified himself as president of the Valley’s apple growers’ association, said it was a welcome development.

“We want the government to introduce it at the grass-root level so that its benefits percolate to the bottom. This will not only solve the problem of unemployment but take the growers out of debt,” he said.

Dozens of government employees were present at the event, held at the directorate of horticulture in Srinagar.

Under the scheme, the central government’s department of agriculture and cooperation and the National Agriculture Cooperative Marketing Federation of India (Nafed) will procure the apples.

The apples will be procured from the growers and aggregators at mandis (wholesale markets) in Sopore (Baramulla), Parimpora (Srinagar), Shopian and Batengo (Anantnag), where the necessary infrastructure is being built.

A state-level committee will decide the prices of the apples based on the variety and the grade, and also fix the rates for packaging, transport, storage and related expenditure.

At each mandi, a quality control-cum-grading committee will certify the apples. Officials said the payment would be made directly into the bank accounts of the growers within 48 hours.