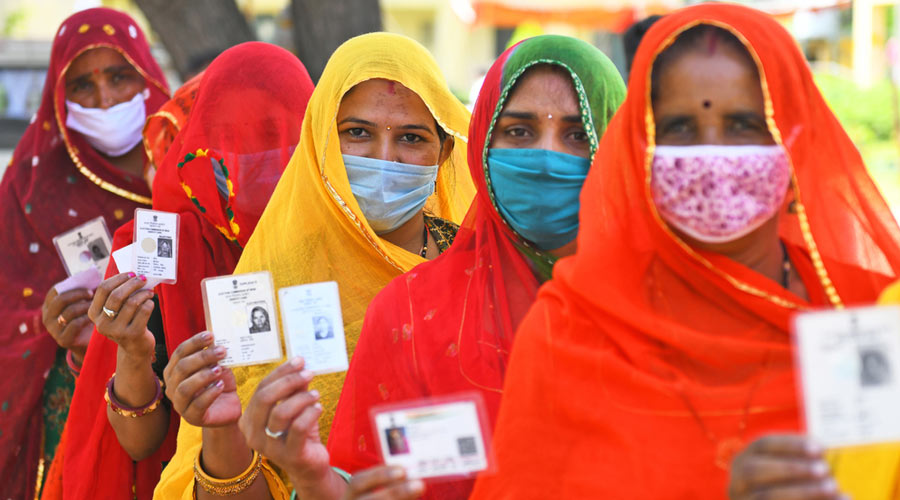 The Election Commission on Saturday said the voting percentage increased in many constituencies in Gujarat in the first-phase polling but the overall turnout was diminished by the urban apathy to voting in key districts such as Surat, Rajkot and Jamnagar.

In urban constituencies in Himachal Pradesh too many voters shied away from polling stations in the assembly elections held last month.

The urban assembly seat of Shimla in Himachal Pradesh recorded the lowest turnout in the state at 62.53 per cent, 13 percentage points less than the state average of 75.6 per cent.

Cities in Gujarat have also shown the trend of urban apathy to voting, pulling down the overall turnout in the first phase, the EC said.

Voter turnout in Surat, Rajkot and Jamnagar was lower than the overall 63.3 per cent in the first phase of Gujarat assembly elections, the poll panel said.

Chief Election Commissioner Rajiv Kumar appealed to the voters of Gujarat to come out in large numbers during the second-phase polling on December 5 to make up for the low voting in the first phase.

The possibility of surpassing the 2017 voting percentage now depends on their increased participation, he said, according to the Election Commission.

The Gandhidham seat in Kachchh district, which has industrial establishments, recorded the lowest polling percentage of 47.8 per cent, a sharp decline of 6.34 percentage points from the 2017 turnout. The latest turnout was a new low, it said.

The second lowest voting was in the Karanj constituency of Surat, which was also 5.37 percentage points lower than its own low of 55.91 per cent in 2017.

Major cities and urban areas of Gujarat have not only recorded decline in voting percentage as compared to the 2017 elections, they have also voted much less than the state average of 63.3 per cent, the poll panel said.

The voting percentage in the first phase of election in 2017 was 66.79 per cent.

There was a visible difference in the turnouts between rural and urban constituencies.

The difference is as wide as 34.85 percentage points between the rural constituency of Dediapada in Narmada district (82.71 per cent) and the urban seat of Gandhidham (47.86 pc).

Also, the average turnout in important urban areas is lower than the turnout in rural constituencies.

CEC Kumar has been working continuously to address the issue of apathy towards voting by urban voters and the youth.

Kumar has been urging state chief electoral officers to identify seats and polling stations with a low voter turnout to ensure targeted interventions to raise awareness and break the stranglehold of urban apathy by reaching out to voters.

To focus attention on urban apathy, the EC has advocated establishing voter awareness forums in organisations -- both private and government -- to highlight the significance of voting and motivating urban working citizens to come out and vote.