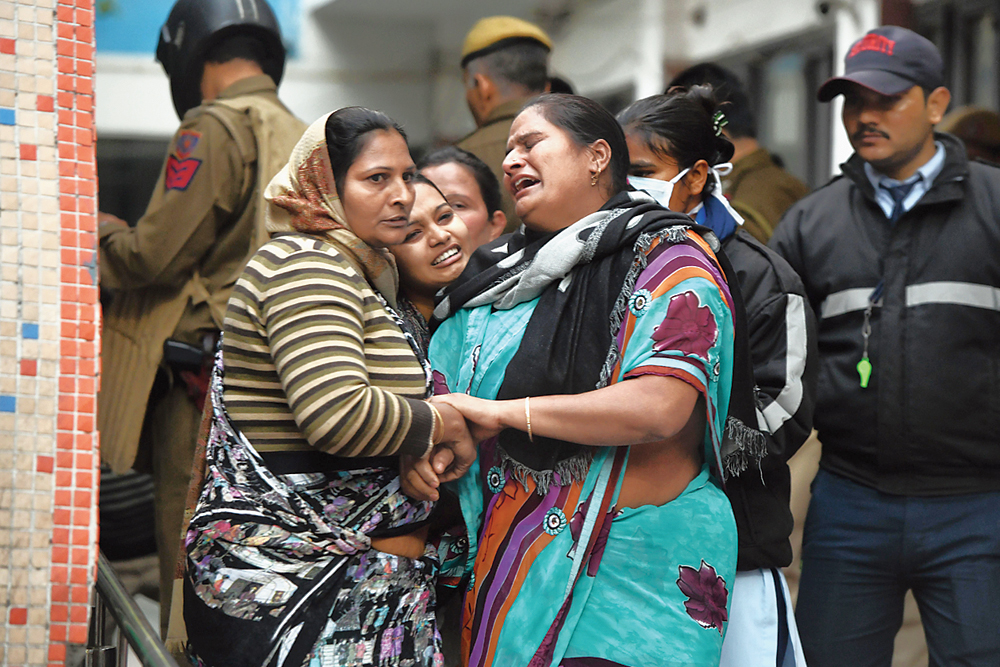 Separated by a few hours, I saw first-hand a terrifying face with a tilak and heard of a reassuring response from Hindu families as well as a gurdwara that kept hope alive in a group of Muslims.

“Maaro, maaro… mullah ko maaro,” shouted young men on bikes as they zipped around the volatile Jaffrabad-Maujpur intersection, punching the air and giving vent to expletives tinged with communal overtones.

One of them, sporting a tilak on his forehead, moved his index finger across his own throat in a mock display of slitting the neck.

I had just arrived in the area at 1 in the afternoon after walking down from Seelampur Metro station as the next station at Jaffrabad has been closed since Sunday following the protest against the citizenship law by women and children.

The walk from the station towards Jaffrabad and Maujpur was perilous. I saw several people, especially those wearing skullcaps, being heckled and abused by a group standing near a police barricade.

As I stood barely 300 metres from the barricade, a van driver and his two passengers were stopped, identified by their religion and slapped multiple times. The rioters snatched their mobile phones and wallets.

Terrified, the van driver and his passengers went down on their knees and pleaded with folded hands to return their phones and wallets but to no avail.

“Bhago jaldi, nahin to azadi de denge,” shouted one among the group of rioters while mouthing abuses again.

Some of them giggled as the driver asked for mercy, turned around the vehicle quickly and, with the two passengers, headed towards Seelampur Metro station.

A closer look at the rioters revealed that most of them were armed with rods, petrol bombs and sticks and were stopping everyone at the barricade. Only those who passed their test were allowed to pass.

They checked reporters, too, identifying them by their religion and scanning mobile phones for videos — deleting anything that offended them — and threatening them with dire consequences if they record anything.

No policemen were visible anywhere and even the traffic cops had been withdrawn. The crowd asked shopkeepers to close their shops.

I met a reporter, Ashfaque, in his mid-20s, from an Urdu daily on the way to Jaffrabad Metro station. He said he was lucky to have survived as the frenzied group had intercepted him while he was trying to cross the barricade. As soon as he revealed his identity, they beat him up and he was let off only after a reporter from a Hindi newspaper came to his rescue, Ashfaque said.

“I am alive only because of the fellow reporter,” he added.

The group referred to reporters with Hindu names as “our brothers”. But they were hostile to the Hindu journalists too and asked them to leave the area at the earliest, saying: “Don’t report anything from here. Hindus are awakened now and have decided to show these ghuspetiyas (infiltrators) their place.”

One of the vigilantes told a TV reporter: “You are our brother… but don’t dare pull out your mobile phones and cameras and record anything. Don’t show anything that is happening in the area.”

I decided to stay put there and not to move further since they were asking for religious identity.

To understand why they were not allowing anyone to cross the barricade, I asked a resident who owns a pan shop. “Andar action chal raha hai,” he said, adding that armed goons were vandalising houses and shops in Muslim pockets and setting properties ablaze.

Nearly an hour later, a police team reached the spot near the barricade and asked the crowd to disperse. The police were seen pleading with them. After persuasion for some time, the crowd relented and left, shouting “Bharat Mata ki jai”.

Near Jaffrabad Metro station, where over 900 women have been protesting against the CAA since Saturday night, elderly Muslim men were holding a meeting with youths, asking them to restrain themselves and not to get provoked.

“They have destroyed several houses and shops belonging to the community since the violence on Monday. If we resort to any violence, then we will suffer more. What can we do when the government is taking revenge on its own people? This is a very precarious and fragile time and we just need to have faith in the Almighty,” mumbled Ashfaque Ansari.

Seated nearby, several women with children in their arms were seen pleading with their male family members to shift to safer places. “We are not safe here any more… they will kill us,” one of the women told her father-in-law.

Ashfaque said violent mobs have been roaming around several Muslim neighbourhoods in the area since Monday night. “They are armed with petrol bombs and are beating up people and setting ablaze houses, shops and vehicles. Instead of taking action, police have sided with these murderous mobs.”

On their mobile phones, women showed videos of their burnt houses and looted shops. “In the darkness of night, they have been raiding houses. We are scared of the night and do not want to spend another endless night here,” said Rukshana, tears welling up in her eyes.

A retired Delhi government official in his seventies, who requested not to be named, said: “This is a communal riot and no longer anti-CAA versus pro-CAA. Any riot can be quelled within a couple of hours if there is a political will to do so. But the irony is that this mindless violence is fuelled by politicians; so who will stop this?”

“It would have stopped if an all-party delegation led by the Prime Minister or the home minister had visited the area. It could have calmed the nerves. But this has so far remained wishful thinking,” the septuagenarian said on Tuesday.

A little distance away, a group of men were discussing how some Hindus in Bhajanpura, another violence-hit area in northeast Delhi, had given shelter to several Muslim families and a gurdwara had opened its doors to Muslims.

They said some Muslim families had on Monday night knocked on the doors of Hindus to escape the wrath of the rioters. “The Hindu families willingly opened their doors and provided shelter. Politicians have forgotten their duties but people have shown brotherhood and heart in this communally charged atmosphere. There is still hope,” said Alamgir, amid applause from the other men.

He was heard telling fellow youths to remain clam and maintain peace and harmony. “Let’s pray for a new dawn tomorrow.”