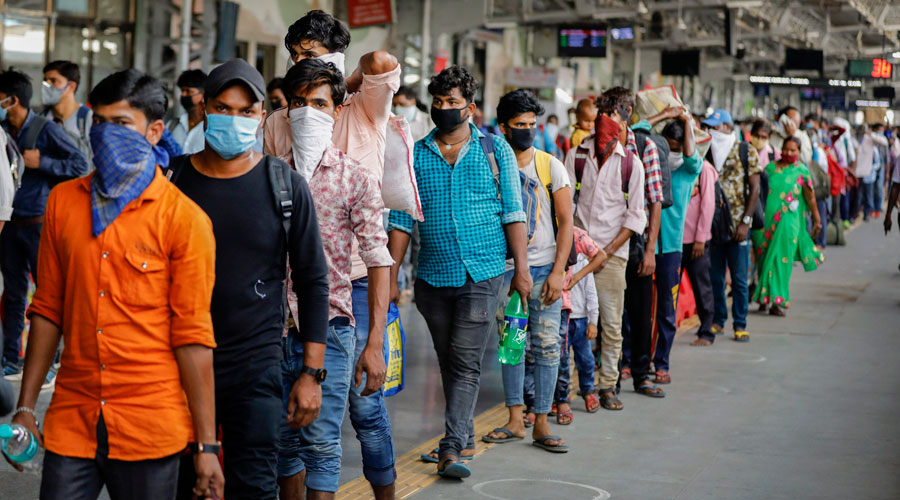 Migrant workers and their families queue for screening on their return as they arrive at a railway station in Ahmedabad on Wednesday.
(PTI Photo)
Basant Kumar Mohanty   |   New Delhi   |   Published 02.07.20, 03:02 AM

If China was missing from Prime Minister Narendra Modi's address to the nation on Tuesday, so was another group about whom he has largely been silent through the past few harrowing months: jobless migrant workers.

Civil society groups and academics on Wednesday urged the Centre to continue free rations for the returned migrant workers during the entire Covid-19 crisis, a day after Modi's announcement of food assistance for the poor made no mention of them.

Modi had declared that the free monthly rations of 5kg grains per person and 1kg channa (gram) per family would continue for the next five months for the 81 crore people covered by the public distribution system (PDS) under the National Food security Act. These free rations come in addition to the families' usual entitlement to subsidised food.

However, at least eight crore people -- migrant workers and their families -- are outside the PDS net, either because they didn't meet the income cut-off in pre-lockdown times or because they failed to secure a ration card at their place of work.

For this section, finance minister Nirmala Sitharaman had in May announced 5kg free grains per migrant worker and 1kg channa per migrant worker family per month for May and June Some of these families that this newspaper spoke to on Wednesday feared the Prime Minister's silence on them meant they would not receive the benefit from this month.

Reetika Khera, economics professor at IIT Delhi, said these 8 crore migrants should be brought permanently under the Food security Act.

"Including 8 crore new people would make the coverage compliant with the legally mandated requirement."

Khera also supported the demand to make the PDS universal, as Tamil Nadu and Himachal Pradesh have done.

In Tamil Nadu, a well-off family may have an NPHH-NC (non-priority household -no commodity) ration card that serves as an identity card while entitling members to all foodstuff (rice, dal, edible oil) subsidised by the Centre or the state.

The Right To Food Campaign, a civil society organisation, has demanded near-universalisation of the PDS scheme to help people deal with the Covid-19 crisis.

Aysha Khan, a member of the organisation, said people except those paying income tax must be brought under the PDS. Currently, the government is providing 5kg grains per month at a subsidised rate to most of the 81 crore PDS beneficiaries while a small section -- the poorest families -- gets 35kg a month.

"Many genuinely poor people need food security for their families but have somehow missed the PDS beneficiary list. They are mostly day labourers like migrant workers, drivers and vendors. The government should universalise the PDS," Khan said.

"Also, the relief provided to the eight crore (returned) migrant workers (and families in May and June) must be continued as long the Covid-19 threat continues."

The government has provided no data on how many among the targeted eight crore actually received the benefits in May and June.