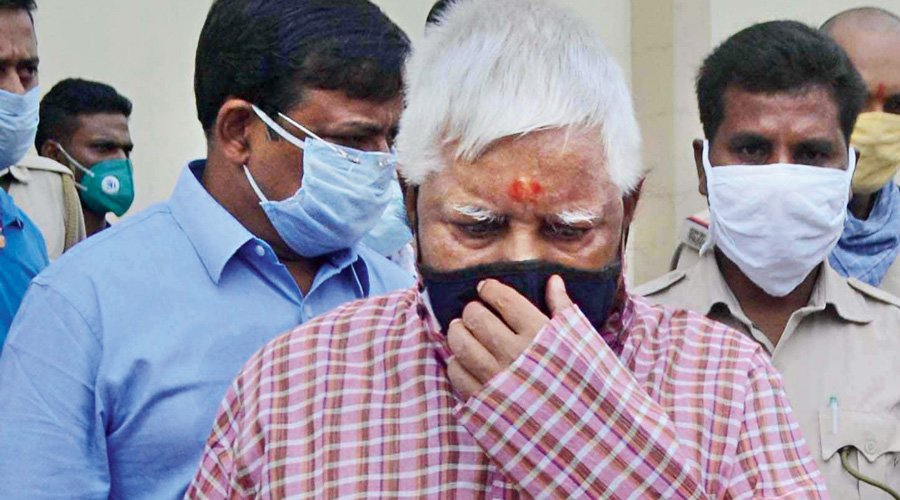 A wave of joy swept through the rank and file of the Opposition Rashtriya Janata Dal (RJD) in Bihar on Saturday after Jharkhand High Court granted bail to party national president Lalu Prasad in a fodder scam case, paving the way for his release.

The bench of Justice Aparesh Kumar Singh granted bail to Lalu in the case relating to illegal withdrawal of Rs 3.13 crore from the Dumka (then in Bihar) treasury by animal husbandry department officials between 1991 and 1996 when he was the chief minister.

The court directed him not to leave the country without permission nor change his address or mobile phone number. Lalu will have to provide two sureties of Rs 1 lakh each and two personal bonds of Rs 5 lakh each. The completion of bail formalities could take two to three days.

Granting the bail, Justice Singh said the RJD chief had already served half the tenure (3.5 years) of his sentence in the case.

A special CBI court in Ranchi in March 2018 had sentenced Lalu to 14 years’ imprisonment — seven under Indian Penal Code (IPC) sections and seven under the Prevention of Corruption Act — and fined him Rs 60 lakh in the Dumka treasury case.

As soon as information about the bail in the fourth of five fodder scam cases reached RJD workers and supporters, they rushed to the 10 Circular Road residence of Lalu and his wife Rabri Devi to celebrate.

Slogans in favour of Lalu rent the air, sweets began to be distributed, while a few more enthusiastic party workers burst crackers.

However, senior RJD leaders intervened before the celebrations could break out on a larger scale in violation of Covid-19 protocols.

“We request all well-wishers, supporters and party workers to observe all the coronavirus pandemic protocols and stay in their homes instead of any celebration. There will be more occasions in the future when we can share our joy with Lalu Prasad. We should also ensure that no negative comments are passed against anybody,” RJD state president Jagadanand Singh said.

Expressing faith in the judiciary, Lalu’s younger son and former deputy chief minister Tejashwi Prasad Yadav said the “messiah of the poor and downtrodden will soon be present among them. There is a wave of joy in the country. He is the need of the hour for the country”.

However, Tejashwi said he and his family will “act as per the advice of the doctors at AIIMS Delhi over whether he should stay at the hospital or come home. He is suffering from several diseases”.

Rabri and eldest daughter Misa Bharti, who is a Rajya Sabha member, were in Delhi and went to meet Lalu after getting news about his bail.

Lalu’s younger daughter Rohini Acharya tweeted: “My Ramzan and Navratra have been successful. The God has given me Eidi (Eid gift).”

Buoyed by the development, several RJD leaders called for a national front against the BJP-led National Democratic Alliance (NDA).

“Just wait for Laluji to come out. We will form the government in Bihar. This is the right time to move for a national front against the BJP and our party president (Lalu) will lead the charge. He is the need of the time,” senior RJD legislator and party spokesperson Bhai Virendra said. The RJD with 75 MLAs is the single largest party in the 243-member Bihar Assembly.

Other Opposition parties, including the Congress, welcomed the bail granted to Lalu.

Six cases were registered against Lalu in the Rs 1,000 crore fodder scam that rocked Bihar politics in 1990s. He was convicted in four of them — two for fraudulent withdrawals from the Chaibasa treasury, and one each related to Deoghar and Dumka treasuries. The RJD chief has now secured bail in all the four fodder scam cases in which he was convicted.

In October 2020, Lalu had obtained bail in the case pertaining to the fraudulent withdrawal of Rs 33.76 crore from the Chaibasa treasury. In July 2019, Lalu got bail in the Deoghar treasury embezzlement case of Rs 84.53 lakh. A case related to illegal withdrawal from the Doranda treasury is still at the trial stage, while he was acquitted in a case involving allegation of disproportionate assets.

These cases have kept Lalu continuously in jail since December 2017, except for a few days when he was out for treatment.

He also attended his eldest son Tej Pratap Yadav’s marriage in May 2018.

Lalu is still an accused in various cases related to railways tender scam, money laundering and Patna zoo soil purchase scam. The CBI, the Enforcement Directorate and the income tax department are investigating them.