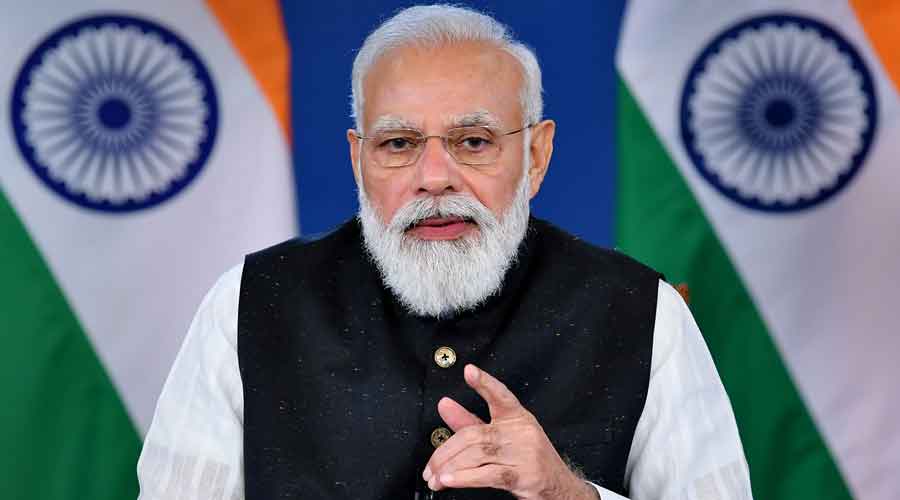 The focus of the Union Budget is on providing basic amenities to the poor, middle class and youth, Prime Minister Narendra Modi said on Wednesday, and asserted that it is imperative that India becomes self-reliant.

In his address on 'Aatmanirbhar Arthvyavastha' at a BJP event, he said that post-Covid, the possibility of a new world order is emerging and the initial indicators of it are already visible.

A big change is coming in the way the world is viewing India, he said.

"People, globally, want to see an empowered and strong India. It is imperative for us that we take our country forward at a rapid pace and strengthen it across several sectors," Modi said.

It is very important that India not only becomes self-reliant but also that a modern India is built on the foundation of 'Aatmanirbhar Bharat'.

Leaving aside the political angle, the budget has been welcomed from all quarters, he noted.

This Budget focuses on providing basic amenities to the poor, middle class and youth, he said, adding that his government is working on the saturation of basic facilities.

Modi also said migration from border villages is not good for national security and the Budget has provisions to develop 'vibrant villages' on border.

The vibrant village programme will benefit border villages in Uttarakhand, Arunachal Pradesh and Ladakh, he said.

The prime minister said the government plans to impart National Cadet Corps training to youth in border villages and will help them join the armed forces.

The Budget, he said, has envisioned a 2,500-km long natural farming corridor along banks of the River Ganga.

Modi asserted that the Budget has given importance to sports and the allocation for it has increased three times over the years.

He said very soon every village will have optical fibre connectivity and 5G technology will usher in a new era.

Modi also said that the digital Rupee will open up new opportunities for the Fintech sector.

Tax benefits for startups in budget will motivate youngsters to innovate, he noted.

Modi pointed out that the Budget proposes to make a four-fold increase in public investments from the UPA years.

Talking about the agri sector, he said a of lot things were said about the Minimum Support Price (MSP), but farmers are expected to get more than Rs 1.5 lakh crore as MSP for paddy this season.

Modi said the houses provided under a PM scheme have in a way turned the poor into lakhpatis .

In the last seven years, we have given three crore poor people 'pucca' houses, and made them 'lakhpatis'. Those who lived in slums, have their own houses. Our government has increased the price and size of these houses so that there is space for education for children. Out of this, most of the houses are in the name of women. We have also made women 'maalkins' (owners), he said.

In the last seven years, the decisions taken are continuously enlarging the Indian economy, Modi said.

In a televised statement on Tuesday, Prime Minister Modi had said the Union Budget presented by Finance Minister Nirmala Sitharaman was "people-friendly, progressive" and full of possibilities for infrastructure, investment, growth and jobs.

Finance Minister Sitharaman unveiled a Rs 39.45 lakh crore budget, with higher spending on highways to affordable housing to fire up the key engines of the economy to sustain a world-beating recovery from the pandemic.

While she primed up spending on infrastructure to create jobs and boost economic activity, Sitharaman did not tinker with income tax slabs or tax rates.