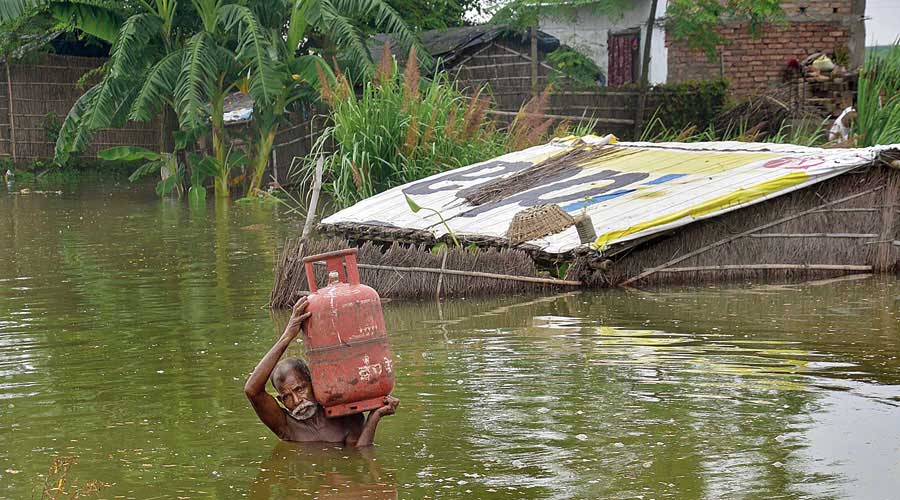 Incessant rains in northern parts of Bihar and neighbouring Nepal for the past three days have revived the floods in the state just when the floodwaters were receding.

This has happened at a time when dates for the Assembly polls in the state have been announced. Voting will be held in three phases on October 28, November 3 and 7.

Heavy discharge of water from the Valmikinagar barrage over Gandak river on the Indo-Nepal border combined with torrential rains led to breach in an embankment in Gopalganj district.

Floodwaters gushing out of the breach are set to make life miserable in several blocks in the district, which are already underwater, and further endangering the lives of several thousand people.

As per disaster management department (DMD) figures, 16 out of 38 districts of the state are already suffering from deluge for over last two months in which 84 lakh people have been affected, including 5.5 lakh who have been displaced due to the high level of water. Altogether 27 people have lost their lives in the ongoing floods.

“The current heavy rainfall in north Bihar and Nepal will further swell the rivers dashing the hopes of full relief in the flood affected districts. The situation will also lead to a rise in the water level of the Ganga also,” a senior DMD official told The Telegraph on the condition of anonymity.

“Though the elections are still more than a month away, the fresh floods could cause problems in preparations and even voting. Right now the situation is such that vast stretches in the affected districts are still inundated and a majority of people, mostly farmers and those engaged in farming activities, have lost their crops and work,” the officer added.