Flood levels rise as major rivers in spate due to heavy rain in Delhi, AP 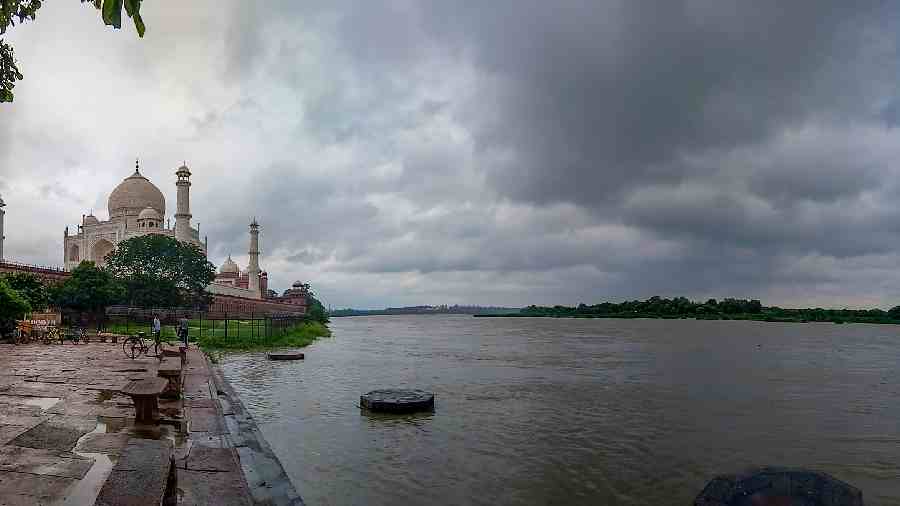 Heavy rainfall has caused flood levels in rivers to rise across the country on Wednesday.

The Yamuna crossed the warning mark of 204.5 metres in Delhi again with Haryana releasing more water from the Hathnikund barrage amid rains in the upper catchment areas, officials said.

The river had breached the danger mark of 205.33 metres on Friday following heavy rains in the upper catchment areas, prompting authorities to evacuate around 7,000 people from low-lying areas. The water level had receded below the warning mark on Monday and stood at 203.96 metres at 6 pm on Tuesday.

However, the water level rose again and crossed the warning mark around midnight. It stood at 204.89 metres at 7 am on Wednesday, the Delhi government's flood control room said.

A forecast issued by the Central Water Commission said the river is likely to rise to 205.25 metres by 9 pm and remain stable thereafter.

The India Meteorological Department (IMD) has said widespread rainfall "with isolated heavy falls" is very likely over Himachal Pradesh and Uttarakhand over the next two-three days.

Last week, Delhi Chief Minister Arvind Kejriwal appealed to people to avoid going towards the banks of the river.

A flood alert is declared in Delhi when the discharge rate from the Hathnikund barrage in Haryana's Yamuna Nagar crosses the one lakh-cusecs mark and people living near the floodplains and in flood-prone areas are evacuated.

The Yamuna floodplains and low-lying areas in Delhi near the river are considered vulnerable to flooding. They are home to around 37,000 people.

The overflowing Yamuna had affected low-lying areas near the river in northeast, east and southeast Delhi last week and around 7,000 people were shifted to higher ground.

The Delhi flood control room reported a discharge rate of around 14,000 cusecs from the Hathnikund Barrage in Haryana's Yamuna Nagar at 6 am on Wednesday. It was 19,745 cusecs at 7 pm on Tuesday.

The discharge rate was 2.21 lakh cusecs at 3 pm on Thursday, the highest so far this year.

One cusec is equivalent to 28.32 litres per second.

Normally, the flow rate at the Hathnikund barrage is 352 cusecs, but the discharge increases after heavy rainfall in the catchment areas. The water discharged from the barrage normally takes two to three days to reach the national capital.

Last year, the Yamuna river breached the danger mark on July 30 and the water level at the Old Railway Bridge rose to 205.59 metres.

Flood levels rise as major rivers in spate in AP

Flood in river Godavari in Andhra Pradesh has been rising steadily on Wednesday again after showing a falling trend over the last two days, following heavy rains in the upper catchment areas.

Consequently, the instant inflow and outflow at Sir Arthur Cotton Barrage at Dowaleswaram near Rajamahendravaram has risen to 14.42 lakh cusecs (cubic foot of water flow per second).

At Bhadrachalam in neighbouring Telangana, the flood in Godavari was recorded at about 15 lakh cusecs, crossing the third danger mark at a level of 54.5 feet.

That much flood will flow down into the Cotton Barrage over the next few hours.

The State Disaster Management Authority said the second warning signal remained in place at the Cotton Barrage even as three teams each of the NDRF and the SDRF have been positioned in the flood-hit districts of Alluri Sitarama Raju, B R Ambedkar Konaseema and Eluru for relief operations.

People along the course of the river have to be on alert till the flood recedes, SDMA Managing Director B R Ambedkar said in a release.

Meanwhile, in river Krishna the discharge from Srisailam reservoir has been 3.95 lakh cusecs on Wednesday morning. Almost the same quantity of floodwater was being released from Nagarjuna Sagar dam downstream, the AP Water Resources Information Management System data showed.

At Prakasam Barrage in Vijayawada further down, a discharge of 2.93 lakh cusecs has been recorded.

In the other part of the state, Nagavali and Vamsadhara rivers in Srikakulam district have also been receiving copious inflows due to heavy rains in the catchment.

At Gotta Barrage in Srikakulam, the flood flow rose to 54,853 cusecs, following which the first warning signal has been raised.