A sudden gush of about two lakh cusecs of floodwater on Friday, with the level reaching up to 10 feet height, caught the villagers unaware 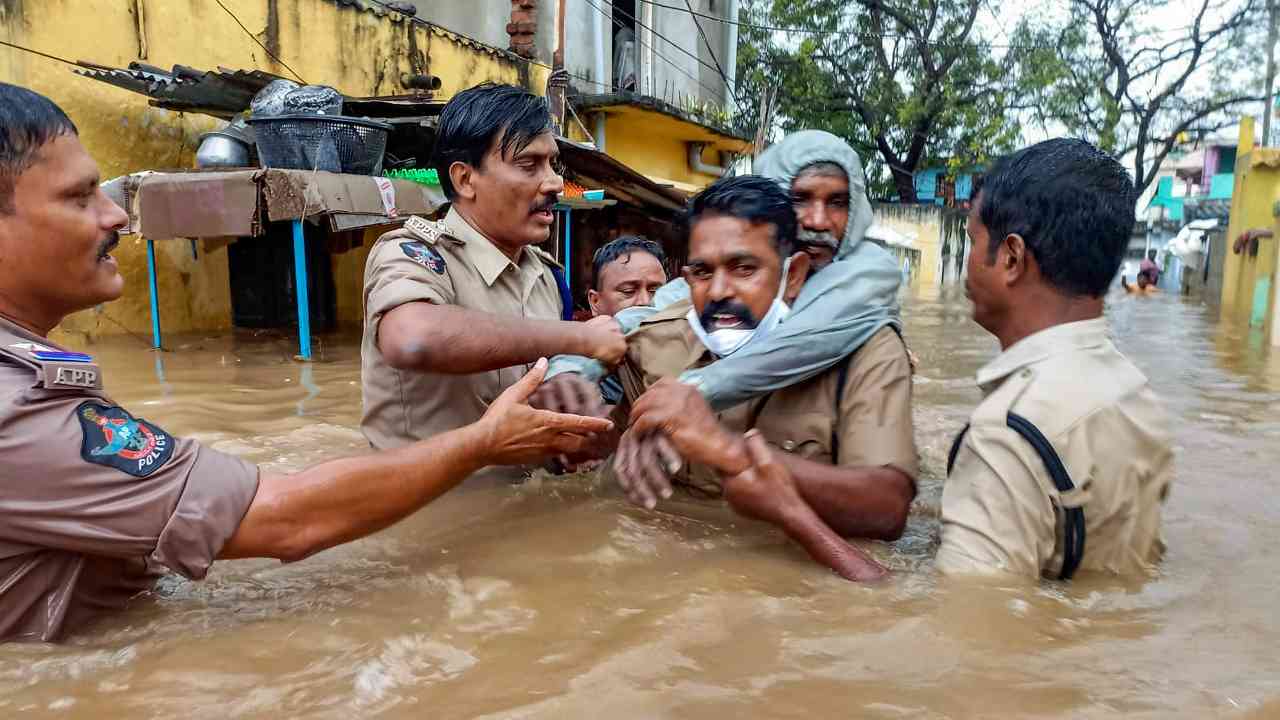 The Annamayya project on Cheyyeru river has turned out to be the sorrow of many a village in Rajampet Assembly constituency in Kadapa district of Andhra Pradesh.Togurupeta, Mandapalli, Pulapathur and Gundlur presented a picture of haunted villages in the wake of the devastation.

The flash flood caused due to a breach of the project's earthen bund caught at least 18 people in a watery grave and left many others missing in these villages.

A sudden gush of about two lakh cusecs of floodwater on Friday, with the level reaching up to 10 feet height, caught the villagers unawares and scampering for their lives.

Tens of houses in these villages downstream the project were reduced to rubble. The villagers literally lost everything, except the clothes on their person.

Agricultural crops in hundreds of acres stood destroyed. Tens of cattle heads were washed away.Nothing of the household items was left as the deluge gulped them.

It all happened in a flash. There was no warning whatsoever about the impending disaster and we were left to face the fury. Now, our lives are in total ruin, the sobbing villagers of Togurupeta and Mandapalli said.

In Pulapathur village, 12 people were swept away in the swirling flood in Cheyyeru, nine in Mandapalli and five in Gundlur. So far, only 18 bodies have been recovered, with no trace of the rest.

Annamayya is a medium irrigation project with a gross capacity of only 2.24 tmc ft on Cheyyeru, a tributary of Penna river, in Rajampet constituency. It caters to an ayacut of 22,500 acres, besides fulfilling the drinking water needs of 140 habitations.

The Pincha project upstream breached, letting out all floodwater into Annamayya while water from Seshachalam too came gushing in because of very heavy rainfall, resulting in an overall discharge of over two lakh cusecs. That pushed Cheyyeru river into spate, inundating at least 10 villages downstream in Rajampet and Nandaluru mandals, and leaving widespread destruction in its wake.

It was nothing but gross mismanagement on the part of the administration. Didn't they know about the flood when there was such heavy rain? Why were we not even alerted about the coming danger before it destroyed us? angry villagers of Mandapalli and Togurupeta questioned.Except some kind-hearted volunteers, the administration did not come to their help in any way, they lamented.

Ours is the first village right under Annamayya project. We lost our houses, cattle, belongings everything. Some of our villagers were killed. There is no place for us to go, the surviving residents of Togurupeta, a hamlet of about 500 people, said.

The temple of the local goddess, which somehow remained intact, has now turned into the only shelter zone for the hapless villagers. Mandapalli presented a heartrending sight.

Two families were completely wiped out as seven people in all were killed in the flood fury. Another family lost two persons.