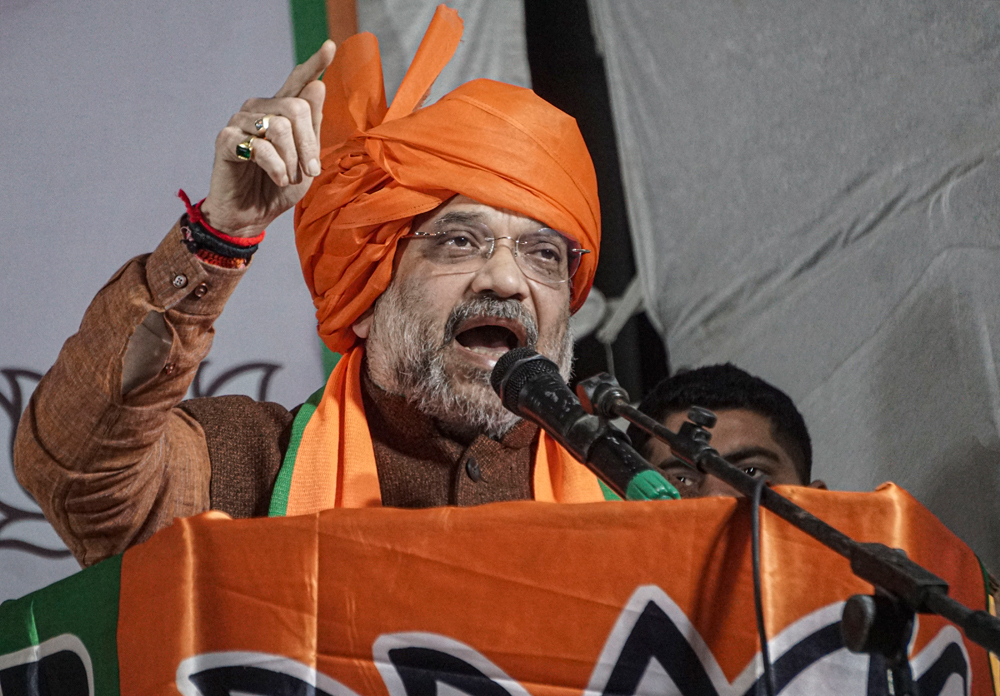 Amit Shah at Matiala in New Delhi on Thursday. The Union home minister had sought to underline in Lucknow earlier this week that the government would not take back the CAA despite the nationwide protests
(PTI photo)
J.P. Yadav   |   New Delhi   |   Published 23.01.20, 09:34 PM

The BJP has no intention to send out any conciliatory signal on the citizenship act, party insiders said, asserting the leadership wants them to adopt a confrontational stand under the assumption that the politically divisive climate and long-drawn protests would eventually corner the Opposition.

While mixed signals have been coming from the party on the two other contentious proposals — the National Population Register and the National Register of Citizens — there was no question of yielding even an inch on the Citizenship (Amendment) Act, they said.

Union minister Prakash Javadekar, responding to ally and colleague in the government Ram Vilas Paswan, has said that queries in the NPR on the date and place of birth of parents would be optional and considered dropped if someone does not remember them.

Sources have said the government might finally drop many contentious questions from the NPR to take the fizz out of the Opposition’s campaign.

On the NRC, too, there are indications from the government that it would put the planned countrywide exercise in the cold storage for now.

But on the CAA, the sources said, the party would not relent.

Home minister Amit Shah had sought to underline this at a rally in support of the CAA in Lucknow earlier this week when he said the government would not take back the law despite the nationwide protests.

Other leaders are now pushing this line further.

At a rally in Meerut on Wednesday in support of the CAA, defence minister Rajnath Singh sought to assure “Indian Muslims”, saying “no one can dare to touch” them. But from the same stage, junior minister Sanjeev Balyan gave out clear signs of confrontation.

Balyan said the “right cure” for the protesting students of Jawaharlal Nehru University and Jamia Millia Islamia university would be to set aside a quota of 10 per cent for western Uttar Pradesh.

“I request Rajnath Singhji. Those at JNU and Jamia who shout anti-national slogans, there is only one cure for them. Have 10 per cent quota from western UP... everyone will be cured and nothing else will be needed,” Balyan said.

The junior minister, an accused in the 2013 Muzaffarnagar riots in west Uttar Pradesh, is known for openly provocative and communal remarks.

His request for a 10 per cent quota for students from western Uttar Pradesh was a clear hint of support for an assault on the agitating students of JNU and Jamia.

JNU had seen such an attack early this month when masked goons entered the university campus armed with iron rods and assaulted students.

“The CAA is an issue at the core of our ideology. There is no question of any conciliation on this. We are determined to expose the Opposition for the lies they are spreading,” a BJP leader said, pointing out that even the RSS was with the government on this issue.

The BJP is banking on polarisation in its bid to wrest Delhi from the Aam Aadmi Party in the February 8 Assembly polls. Party insiders feel that the ongoing protest against the CAA at Shaheen Bagh was silently generating anger among people because of the detours they have to make while travelling.

“It’s going to be India versus Pakistan on February 8 in Delhi. ‘Mini Pakistans’ have been created at many places in Delhi. Shaheen Bagh is being replicated at various places,” Delhi BJP leader Kapil Mishra said on Thursday.

“Why should we act against the Shaheen Bagh agitators? They are only helping us in building public anger against such meaningless protests despite assurance from the government that there was no danger to the citizenship of Muslims,” a Delhi BJP leader said.

This leader, however, indicated that force could be applied to vacate Shaheen Bagh closer to the elections.