Farmers’ union dissociates itself from ‘antisocial elements’ in rally

‘We have always held that peace is our biggest strength’ 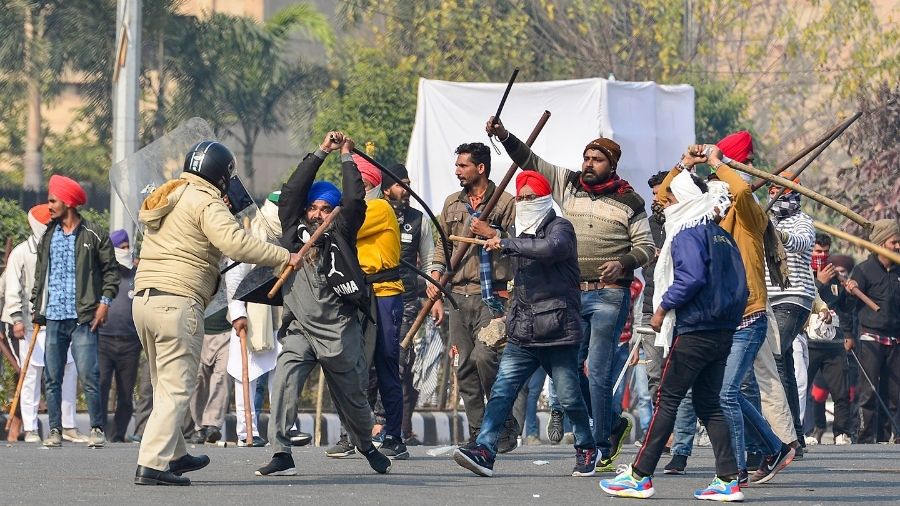 Farmers’ union organisation Samyukta Kisan Morcha said some ‘antisocial elements’ infiltrated their tractor rally on Tuesday, and dissociated  itself from those who indulged in violence during the parade.

The union also condemned and regretted the "undesirable" and "unacceptable" events as the parade turned violent after several groups of farmers deviated from the pre-decided route for the march.

The Samkyukt Kisan Morcha, an umbrella body of 41 farmer unions, is leading the protest against the three central farm laws at several border points of Delhi.

“We thank farmers for the unprecedented participation in today’s farmers’ Republic Day Parade. “We also condemn and regret the undesirable and unacceptable events that have taken place today and dissociate ourselves from those indulging in such acts,” the farmers’ organisation said in a statement.

“Despite all our efforts, some organisations and individuals have violated the route and indulged in condemnable acts. Antisocial elements had infiltrated the otherwise peaceful movement. We have always held that peace is our biggest strength, and that any violation would hurt the movement,” it said.

Its statement comes as farmers clashed with police at several places in the national capital. A protesting farmer died at Delhi's ITO after his tractor overturned. Police also had to use lathicharge and teargas shells to control unruly protesters at multiple locations in the city.

“We dissociate ourselves from all such elements that have violated our discipline. We appeal strongly to everyone to stick to the route and norms of the parade, and not indulge in any violent action or anything that taints national symbols and dignity. We appeal to everyone to desist from any such acts,” the Morcha added.

“We are trying to get a full picture of all the events with regard to the several parades that were planned today and will share a full statement soon. Our information is that apart from some regrettable violations, the parades are underway peacefully as per plan,” it said.

Welding sticks and clubs and holding the tricolour and union flags, tens of thousands of farmers atop tractors broke barriers, clashed with police and entered the city from various points to lay siege to the Red Fort and climb the flagpole on Republic Day on Tuesday.