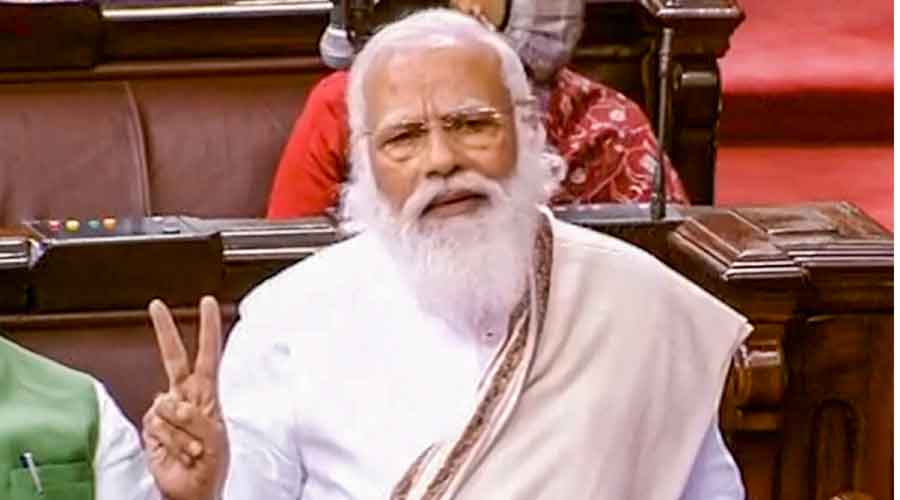 Prime Minister Narendra Modi used the august House on Monday to profile a “new breed” of protesters as “Andolan Jeevi” and parasites and asked the country to be alert about “Foreign Destructive Ideology”, falling back on conspiracy theories and labels reminiscent of the Nazi era in Germany.

On a day that stood out for contradictions, the Prime Minister also sought to claim legitimacy for the controversial farm laws by swallowing his pride and quoting his predecessor Manmohan Singh who had been repeatedly ridiculed and called names by Modi. It was also an indirect admission that his government’s laboured explanations to the farmers had proved ineffective even after 11 rounds of talks.

Modi told the Rajya Sabha while replying to the motion of thanks on the President’s address: “We are aware about shramjeevi (workers), buddhijeevi (intellectuals). A new breed has taken birth. They are the Andolan Jeevi. You will find them at the protests of lawyers, students, workers and farmers.

The choice of words was an unfortunate throwback to the run-up to the atrocities Hitler committed in Germany, where he set the stage by relentlessly describing the Jews as parasites living off others or as harmful bacteria (“noxious bacillus”) .

Prime Minister Modi is using similar terminology, branding some of the protesters “Andolan Jeevi” and publicly sounding a call to single them out close on the heels of an attempt to attack the protesting farmers near Delhi and pass it off as a spontaneous reaction from residents in the neighbourhood. The very same tactic was used in Nazi Germany to pit neighbour against neighbour and hound dissenters.

Unwittingly or otherwise, Modi borrowed from other playbooks, too. He again referred to the Emergency and the terrible price it had exacted, but this did not prevent him from playing the “foreign hand” card once monopolised by Indira Gandhi.

“The nation should stay away from these Andolan Jeevi. We are talking about FDI (foreign direct investment). Another FDI has come too. It is ‘Foreign Destructive Ideology’. We have to be aware of them to save the nation from this ideology,” Modi said.

The Prime Minister’s warning suggests that the tweets by celebrities abroad have touched a raw nerve -– something the deaths of over 160 farmers could not achieve.

Modi invoked three of his predecessors to defend the new farm laws. The farmers are demanding the repeal of the three laws and a legal guarantee for the payment of the minimum support price (MSP) while farm produce is bought from them.

Modi referred to the views of the late Prime Minister and Bharatiya Lok Dal leader Chaudhary Charan Singh to underscore the plight of farmers.

The Prime Minister quoted Manmohan as saying “there are other rigidities because of the whole marketing regime set up in the 1930s which prevent our farmers from selling their produce where they get the highest rate of return”.

“You should feel proud that Modi is doing what Manmohan Singh said,” Modi said.

He said that during the Green Revolution, there were similar protests against the reforms but the then Prime Minister, Lal Bahadur Shastri, went ahead with them.

What Modi did not say was that the government has been unable to address the fears of the farmers who believe that the ham-handed manner in which the laws have been pushed proves that they are aimed at exploiting them and abetting crony capitalism.

“We are asking the farmers to come to talks. This is the time to strengthen agriculture. We cannot take the country backward. Mandis should be made modern and efficient. The MSP was there, is there and will be there in future. But we have to take steps to reduce the load on farming. Affordable ration for the poor will continue,” Modi said.

Modi said certain forces wanted instability in India and were trying to mislead the Sikh “brothers”.

“The country is proud of our Sikh brothers. The language spoken about them and the way they are being misled, it is not good for the nation,” Modi said, conveniently forgetting that the ecosystem associated with his regime had sought to malign the protesters.

Nor did the Prime Minister explain the reason for his condescension – that is, what made him think that a proud community that had always been at the forefront of defending and feeding the nation could be so easily “misled”.

BJP scores an andolan ‘own goal’