Sportspersons, singers, academics, writers, veterans, a crop scientist, politicians and faceless multitudes have rallied behind protestors to contribute in any way they can 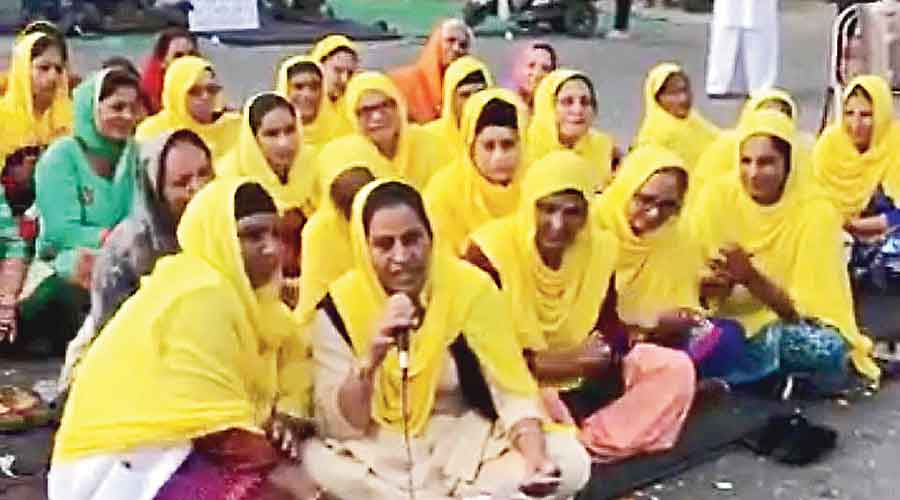 A still from a video circulating on social media shows protesters against the farm laws singing a song against Modi
Sourced by The Telegraph
Harshita Kalyan   |     |   Published 17.12.20, 02:26 AM

The women are gathered in a group, clapping to keep the beat as one of them leads with a boli (couplet). The telltale signs say it could be a Punjabi wedding but the lyrics don’t mock-attack the in-laws.

(I have added milk to tea, Modi has now started a war. Tell me, what will you have? Chorus: One cup of tea.)

Neither is the venue the lit-up home of a bride or groom; it is a protest site of farmers on the road.

The women are turned out in yellow dupattas invoking the revolutionary Bhagat Singh, and their message is for the Prime Minister: “This is war.”

This sounds like a protest song but the singer shimmers in bright silk and gota (gold lace), dressed for a wedding, as are the men and women around, who are breaking into laughter at the tweaking of the lyrics of a popular number for the performance.

The mandatory cheering and dancing that accompanies a baraat on its way to bring home the bride are making their presence felt but the message again is for the Prime Minister: “We won’t let the laws stand.”

Protest and celebration have dovetailed — as good a yardstick as any to measure the depth of the farmers’ movement standing at Delhi’s door.

Ask any child in Punjab what the protests are about and the reply comes without hesitation: “Modi is trying to rob us of our rights and our land.”

They are speaking from the knowledge that comes from listening in to conversations of elders as children are wont to do.

“Modiji, we are Jatt, Jatts give their lives for their land, don’t you try to take our land from us,” a chubby little girl warns in a video that went viral sometime ago.

That the government has in its talks now offered to bring “clarity” in the law on contract farming and bar confiscation of land suggests this is being recognised as a real fear.

What videos circulating on social media reveal is that the farm laws are dominating everyday conversation in Punjab, and that the opinion against them is overwhelming and that it is informed.

Until recently, few experts have highlighted that the laws deny the farmers the right to legal recourse for a breach in contract, directing them to bureaucrats instead of civil courts.

But in bites to television reporters milling about the protest sites many a farmer has pointed this out and asked if government officials can be expected to rule against an Ambani or an Adani or any other powerful corporate house.

Modi and his government say the laws are pro-farmer. They ask farmers not to be “misled” by the Opposition, by “Khalistanis”, by “Maoists”, by the “Tukde Tukde gang”.

(I have put cardamom in the tea, we won’t let Modi’s cunning succeed. What will you have?)

Laughing, the women around her chorus: “Ik cup chaa.”

On a wedding video that made it to television news, an announcement is heard: the shagun (cash gift) that guests give the newlyweds will be sent to the farmers’ protest.

Sportspersons, singers, academics, writers, veterans, a crop scientist, politicians and faceless multitudes have rallied behind the farmers to contribute in any way they can — with their voice, with cash, with rations and woollens, or with seva (voluntary service) that could mean cooking or cleaning or doing the laundry at the site, offering health check-ups, or simply making and sending batches of pinni (laddu) for them from home.

The tractor trailers parked for miles on the highway outside heavily barricaded Delhi are for everyone to see, but behind these unseen is the will of the entire state.

Another video, another child, who starts respectfully with a “Sat Sri Akal, Modiji” and introduces herself as Seerat Kaur before she chides the Prime Minister: “Modiji, you asked us to clap and we clapped. You asked us to bang thalis and we banged thalis. You asked us to light diyas and candles, and we lit those. Corona can’t even be seen, but in spite of that we did what you told us. Now all these farmers are sitting in the cold outside Delhi, and everyone can see them, why don’t you then do what is needed to solve the problem?”

The protest outside Delhi is not Punjab’s alone. There are tens of thousands of farmers from Haryana, thousands from Uttar Pradesh and Rajasthan, and many have travelled from Maharashtra, Madhya Pradesh, Tamil Nadu, Odisha and other corners of the country even in the absence of regular trains.

But it is a protest led by Punjab, whose livelihood and way of life revolves around farming. After two months of agitating in vain at home, the state’s farmers piled rations and blankets onto tractor trailers and set out for Delhi in the last week of November. “Dilli Chalo.” Farmers from Haryana were quick to follow, and now there are participants from many parts of India.

Ask how long they will sit on dharna, and the assured refrain is: “We have enough food. We have brought supplies to last six months and more are coming.”

It is this that the protesters, proud farmers, are fighting to save: food security.

If there is one dominating visual of this protest, it is that of the langar. Dal and vegetables and roti cooking in huge utensils, pakodas and jalebis being fried, people eating, tea being served, including some to the policemen manning the barricades to keep the protesters out of Delhi. There is enough food for everyone.

And there is more. A langar of chaat and golgappas sponsored by one village, of pizzas started by other villages, of Maggi that was a hit with kids, of cashews and raisins sent by a supporter, and a langar of peanuts offered by one frail and elderly farmer.

Where are the resources for these coming from, the trolls ask? No, India’s farmers don’t need funding from Pakistan or China to eat pizza. The resources come from the same place as those for the langars the gurdwaras ran for the countless migrant labourers left starving by the sudden lockdown in March. The same langars that finance minister Nirmala Sitharaman had acknowledged at the time.

Those community kitchens were fuelled by the sense of religious duty to feed the hungry and by empathy for those less fortunate.

The langars at Delhi’s border now are powered by the farmers themselves, by their families and friends, by neighbours and fellow villagers, by the community they are a part of, the gurdwaras that they give a share of every harvest to.

How long will you be here, a BBC journalist asks a mother who has left her children with her in-laws as she and her husband joined the protests.

“As long as Modi Sahab wants us to be here,” she laughs. “It is for him to decide how long he wants to keep people on the roads. There are seven-year-olds here and those above 90, in the cold.”

Night temperature in Delhi is now touching 5 degrees Celsius and on the highway, it would be lower. Those that can, sleep in their covered tractor trailers or underneath them. But there are many who sleep in the open, with just a blanket, and little to shield against rain when it comes as it did in a light spell last week.

The assertion, “We would rather die than go back without repeal of the laws,” is not an empty refrain. At least 15 protesters have died in 20 days.

The farmers know what they are up against. That they are turning road dividers on the highway into kitchen gardens, planting onions, coriander, spinach and other vegetables, is proof they know this is going to be a long haul.

A few kilometres from where the farmers are camped, in the heart of Delhi, stands Sis Ganj Sahib. The gurdwara was built at the site where Guru Tegh Bahadur, the ninth Sikh guru, was beheaded on Aurangzeb’s orders for resisting religious persecution of the Sikhs and the Hindus. Sis translates as head. The anniversary of his martyrdom is this week.

Days after that it will be time for the Shaheedi Jor Mela in Punjab’s Fatehgarh Sahib, where lakhs gather every year to remember the martyrdom of the two younger sons of the 10th Sikh Guru, Guru Gobind Singh, and be inspired by it. The boys, both under 10, had refused to be converted by force and were entombed alive.

Had the farmers who led the march on Delhi not been at the protests now, many would have been heading to Fatehgarh Sahib with their children and grandchildren to ensure another generation learns the lesson of valour and sacrifice and of resistance against persecution, and grows up with the conviction that each one should be able to take on a lakh and a quarter in the battle for justice.