Advertisement
Home / India / Tractor rally on Republic Day will be held as scheduled, say farmers
'No disruption of official parade'

Tractor rally on Republic Day will be held as scheduled, say farmers 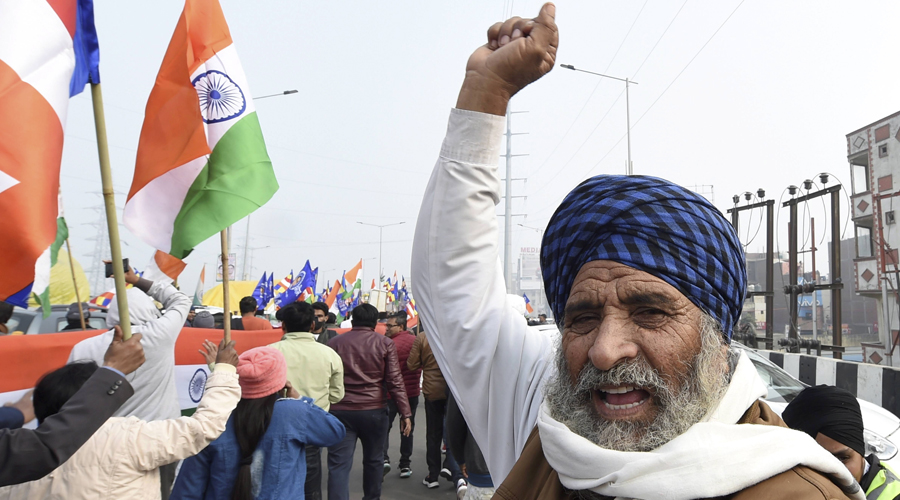 Farmers raise slogans during their protest against the new farm laws, at Ghazipur border in New Delhi on Sunday.
PTI Photo
Our Bureau And Agencies   |   New Delhi   |   Published 17.01.21, 07:43 PM

Protesting farmers’ unions on Sunday said they will not call off their proposed tractor parade in Delhi when India will celebrate Republic Day on January 26.

Union leader Yogendra Yadav, addressing a press conference at the Singhu border in Delhi, said, “We will carry out a tractor parade on the Outer Ring Road in Delhi on Republic Day. The parade will be very peaceful. There will be no disruption of the Republic Day parade. The farmers will put up the national flag on their tractors.”

The authorities had moved the Supreme Court seeking an injunction against the proposed tractor march or any other kind of protest by farmers which seeks to disrupt the gathering and celebrations of Republic Day on January 26. The matter is pending in court.

Another farmer union leader, Darshan Pal Singh, alleged that the National Investigation Agency (NIA) is filing cases against those who are part of the protest or supporting it.

“All farmer unions condemn this,”  Pal said, referring to the NIA summons reportedly issued to a farmer union leader in a case related to the banned Sikhs For Justice outfit.

Earlier in the day, Union Agriculture Minister Narendra Singh Tomar again urged the protesting farm leaders to give up their “stubborn” stand on the new farm laws and come for a clause by clause discussion.

His comment came ahead of the big day on January 19, when the farmers will meet the three central ministers for the tenth time at the Vigyan Bhawan, while the Supreme Court appointed panel will conduct its first meeting at the Pusa campus in New Delhi.

Now that the Supreme Court has stayed the implementation of these laws, then there is no question of being stubborn,” Tomar told reporters before leaving for his home constituency of Morena in Madhya Pradesh.

The government wants farmer leaders to come for clause by clause discussion at the next meeting on January 19. Except for the demand of repealing the laws, the government is ready to consider “seriously and with an open heart” other alternatives, he said.

Tomar said the government offered certain concessions, but the farmer leaders have not shown flexibility and were constantly demanding a repeal of the laws.

He reiterated that the government makes laws for the entire country. Many farmers, experts and other stakeholders have supported the laws.

So far, the nine rounds of formal talks between the Centre and 41 farmer unions have failed to yield any concrete results to end the long-running protest at Delhi’s borders as the latter have stuck to their main demand of a complete repeal of the three Acts.

Thousands of farmers, mainly from Punjab, Haryana and western Uttar Pradesh, have been protesting at various border points of Delhi for over a month now demanding repeal of the three laws -- the Farmers’ Produce Trade and Commerce (Promotion and Facilitation) Act, the Essential Commodities (Amendment) Act, and the Farmers (Empowerment and Protection) Agreement on Price Assurance and Farm Services Act.