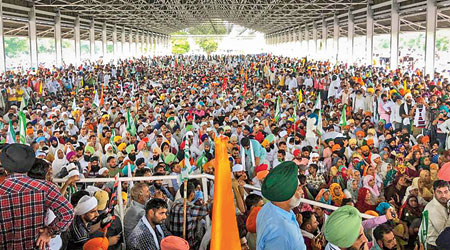 The Samyukta Kisan Morcha (SKM) on Wednesday evening opened a new front near the Karnal mini-secretariat after the Haryana government refused to initiate disciplinary action against the then sub-divisional magistrate for ordering the police to break the heads of protesting farmers on August 28.

The farmers began picketing near the Karnal mini-secretariat only by evening after talks between the farmers’ leaders and the administration broke down and peasants walking towards the mini-secretariat after a mahapanchayat faced police water cannons.

The SKM, the umbrella organisation of 40-odd farm unions leading the peasants’ struggle against the Centre’s contentious farm laws, had given a call for gherao of the mini-secretariat.

As the protesters appeared to settle in for the night, their leaders said the gherao would continue until their demands were met.

When the mahapanchayat began on Tuesday morning, the local administration invited 11 farm leaders for talks. Over three hours later, SKM leaders announced that the administration had refused to give in to even their watered-down demand of suspending the then SDM Ayush Sinha pending an inquiry, prompting the farmers to proceed towards the mini-secretariat.

Sinha was on Wednesday transferred as an additional secretary to Chandigarh after the Haryana chief minister himself had supported him.

The administration, which had ordered an Internet shutdown in not just Karnal but also four adjoining districts for the day, had in the morning allowed the farmers to congregate at the local grain market amid tight security in an apparent bid to avoid a face-off given the number of participants.

The administration refused to allow them to march towards the mini-secretariat and, instead, invited a delegation of 11 farmers for talks. Since the SKM has always maintained that it is open to talks, the farmers went to the session but there was no meeting point.

Once the talks failed, the union leaders decided to proceed with the gherao and the farmers began marching towards the mini-secretariat.

Tikait and Yadav were briefly detained by the police but were eventually released. The police water-cannoned the farmers as they forced their way through the barricades and reached close to the mini-secretariat.

The leaders told the farmers not to get into any confrontation with the police. They were asked to squat on the road wherever they were stopped.

Once the farmers breached the barricades and got close to the complex, appeals were sent across to the farming community and supporters for supply of drinking water and food to the protest site.

Farm: Karnal Net off before gherao