Since October, more than half the roughly 100 stores of Reliance Retail in Punjab and Walmart’s 50,000-square-foot wholesale outlet in Bathinda, have been shut 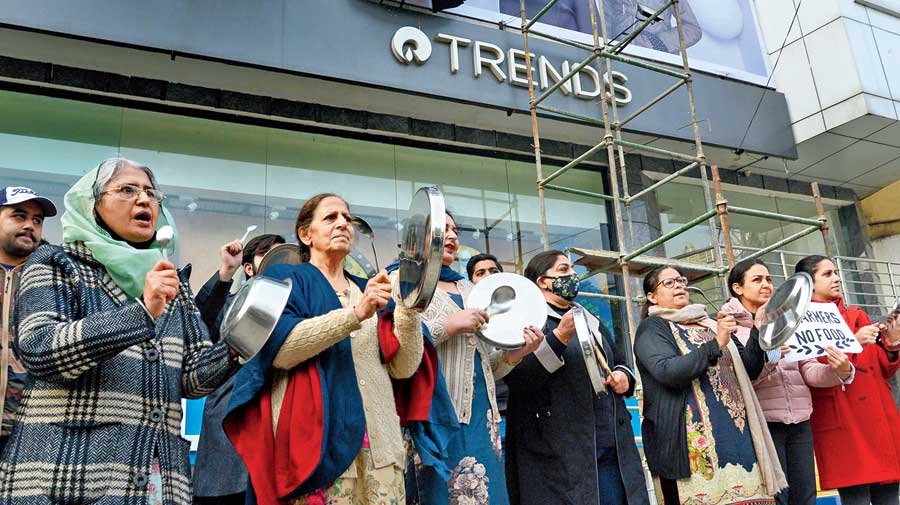 Utensils being clanged in front of a Reliance Trends store in Jalandhar last month in support of the farmers’ agitation.
PTI
Reuters   |   Mohali   |   Published 15.01.21, 01:04 AM

Dozens of Reliance Industries’ retail stores and a giant Walmart outlet face revenue losses of millions of dollars after being forced to shut for more than three months over protests against the new farm laws, sources said.

Thousands of farmers from states including Punjab have camped for weeks near the capital, in a bid to force Prime Minister Narendra Modi to repeal the laws they contend will benefit corporates, rather than cultivators.

Fears of farmers’ agitation in Punjab, home to many protest leaders, have stoked companies’ fears over vandalism and the safety of employees, prompting the closure of dozens of shops, store employees and industry sources said.

Since October, more than half the roughly 100 stores of top retailer Reliance Retail in Punjab and Walmart’s 50,000-square-foot wholesale outlet in Bathinda, a centre of the protests, have been shut, the sources added.

“We are scared of the protesting farmers,” said a senior official of a shuttered Reliance outlet in Mohali, a prosperous city located in the farm belt.

One industry source said estimated losses for Reliance from its state-wide shutdowns run into millions of dollars. Two other sources said Walmart’s estimated revenue loss from its store, one of 29 such outlets nationwide, has crossed $8 million.

“The farmers camp outside the Walmart store daily, they don’t let anybody go in,” said one of the sources, adding that the store employed about 250 people.

Thousands of items in the store are gathering dust and have passed their use-by date.

Reliance store officials and the sources, who have direct knowledge of the situation, sought anonymity as they were not authorised to speak to media.

Walmart and its Indian unit, Flipkart, did not immediately respond to a request for comment. Reliance, India’s largest private company, also did not respond.

Both firms can absorb the losses for now, said Ankur Bisen, head of consumer and retail at consultancy Technopak Advisors, but he added, “they have to keep their fingers crossed that shutdowns do not extend to other states.”

A Punjab official said authorities were ready to provide security but could do little if companies had decided to keep their stores shut.

For their part, some farmer unions have vowed to continue the protests and block stores from opening.

“Our protests against corporates like Reliance will continue... there is no question of lifting our sit-ins,” said Kulwant Singh Sandhu, an official of one protesting group, the Democratic Farmers’ Union.

Another farm leader, Jagtar Singh, said protests against Reliance would continue until the government repealed the laws.

The Union government says the laws passed in September will boost farmers’ incomes by letting them deal directly with big companies and bypass government-regulated wholesale markets.

But many of the unions disagree, saying they risk losing their bargaining power and becoming vulnerable to potential bulk buyers such as Walmart and Reliance.

They fear the eventual disappearance of the guaranteed prices the government pays for their grain.

Reliance, controlled by Mukesh Ambani, has said it would require suppliers to abide by these prices, known as minimum support prices, or a similar mechanism.

In December, the protests also disrupted Reliance’s nearly 2,000 telecom towers and several petrol pumps in Punjab. Protests along highways linking it to New Delhi have disrupted transport and industries such as textiles.

In November, Punjab estimated economic losses from the protests at $4 billion, while one industry group has pegged the overall hit to India’s economy at $9.6 billion.