Protesting peasants march to Raj Bhavans, raise twin flags of ‘Save Agriculture’ and ‘Save Democracy’

They indicated that they would continue to campaign against the BJP during the upcoming polls in the states, including Uttar Pradesh 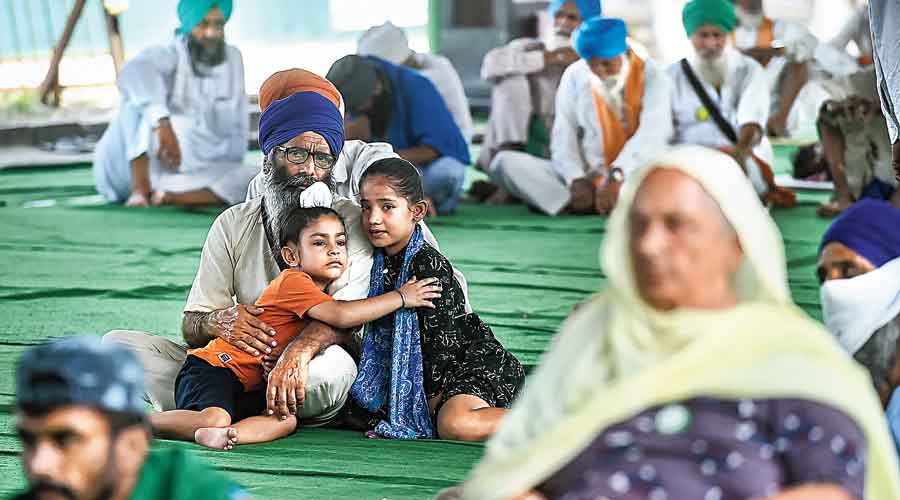 Farmers and their families at the Singhu border protest site on Saturday, which was observed as Save Agriculture, Save Democracy Day
PTI
Anita Joshua   |   New Delhi   |   Published 27.06.21, 01:30 AM

The protesting farmers marched on Saturday to Raj Bhavans across the country, reminding the nation that their vigil at Delhi’s borders had withstood the might of the Narendra Modi government for seven months and coped with the devastating second wave of the pandemic that diverted attention from their cause.

The farmers indicated they would continue to campaign against the BJP during the upcoming polls in the states, including Uttar Pradesh.

The farmers, protesting against three new farm laws, raised the twin flags of “Save Agriculture” and “Save Democracy” as they marked seven months of their agitation at Delhi’s borders, a day after the 46th anniversary of the Emergency.

The Samyukta Kisan Morcha’s decision to have farmers march to the Raj Bhavans in every state instead of effecting a big mobilisation around Delhi was a concession to the pandemic.

On Friday, Union agriculture minister Narendra Singh Tomar had urged the farmers to end their agitation, saying the government was willing to talk to them about their fears about the new farm laws. He claimed these three laws had the support of many others from the farming community.

The Morcha, the collective leading the protests, described Tomar’s remarks as perplexing.

“It appears that he has gone back to a position of asking farmers to share clause-by-clause concerns and objections, whereas farmer leaders had already clearly explained by the beginning of January 2021 why they are not seeking some meaningless amendments here and there in the three central farm laws when there are fundamental flaws in the laws and their very objectives,” it said.

For the protesting farmers who have lost nearly 500 colleagues during the agitation, the minister’s insistence that the laws are for their benefit amounts to rubbing salt into their wounds.

The farmers believe that such a stance completely ignores the apprehensions that have brought tens of thousands of them onto the streets for so long.

“It is clear that the Narendra Modi government at the Centre has not given up on its numerous tactics of escaping its responsibility towards farmers of the country,” the Morcha said.

“Farmers are ready to put in their energies to educate fellow citizens, and appeal to them to punish the BJP. That is the only lesson that the government seems to be willing to listen to.”

The comments suggested the farmers intended to go ahead with their plan to campaign against the BJP in the next round of Assembly elections, too, including the crucial one in Uttar Pradesh.

The farmers hope to hurt the BJP particularly in western Uttar Pradesh, where Jat farmers have rallied around Bharatiya Kisan Union leader Rakesh Tikait, who has been one of the faces of the protest since January.

Rashtriya Lok Dal chief Jayant Chaudhury too has been working in tandem, and the protesters hope to keep this dynamic alive till the elections.

In the last round of Assembly elections, too, the farmers had travelled to key states, including Bengal, to campaign against the BJP while maintaining they would not canvass votes for any party.

“Ours was an issue-based approach where we went and told the people not to vote for the BJP because of what they are doing to farmers, and vote in a manner that would defeat the BJP. We did not campaign for any party,” a farmer leader said.