Farmer protest: A 1907 call resonates at the barricades 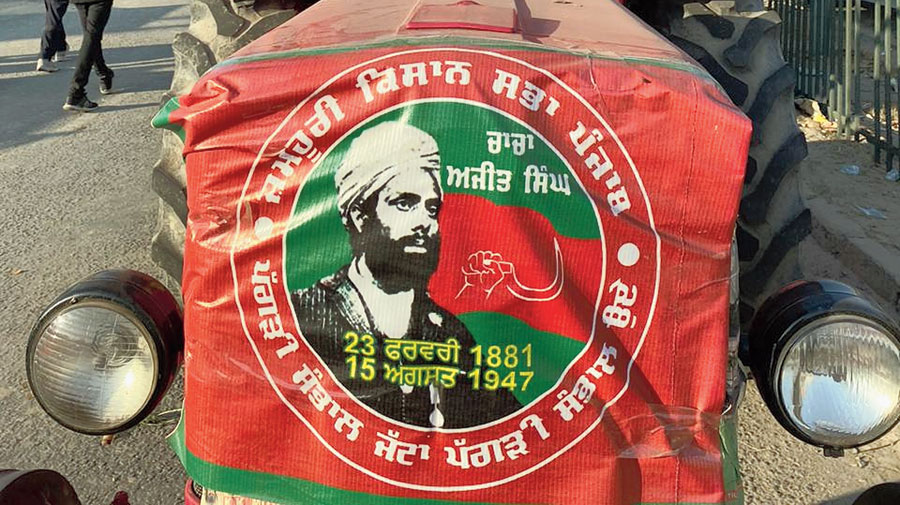 The lyrics of Paghri Sambhal Jatta — a Punjabi ballad — have echoed at the barricades during the farmers’ agitation from Punjab to Delhi over the past week.

A peasants’ movement against the British Raj’s agrarian laws in 1906 took the name of the song by Banke Dyal, the editor of the Jang Syal weekly.

The words “Paghri Sambhal Jatta” translate to “Mind your turban, peasant”. The turban is a key religious marker of Sikhs and is seen as a symbol of dissent to tyranny. Falling of the turban is seen as a sign of defeat.

The movement led by Ajit Singh, the uncle of revolutionary Bhagat Singh, has found resonance today with peasants’ groups displaying Ajit Singh’s image on badges and banners, and singing the song kept alive in popular imagination by its use in biopics on Bhagat Singh in 1965 and 2002.

A series of legislation, including the Punjab Land Alienation Act, 1900, the Punjab Land Colonisation Bill, 1906, and the increase in water rates the same year, after two successive crop failures, had enraged the peasantry.

The colonisation bill imposed Doctrine of Lapse-like conditions by which privately held land in agricultural colonies along the Upper Bari Doab canal was lapsed to the State if the owner died without a male heir. The annexation of princely states by the East India Company under the Doctrine of Lapse led the disposessed royals to support or lead mutineers of the Bengal Army in 1857.

In his 2019 book Panjab: Journeys Through Fault Lines, Amandeep Sandhu explained: “These laws reduced the peasants to sharecroppers; they could neither fell trees on these lands, nor build houses or huts or even sell or buy such land…. In 1907, in Lyallpur, Ajit Singh Sandhu — also Bhagat Singh’s uncle — spearheaded the movement that articulated the farmers’ discontent.” 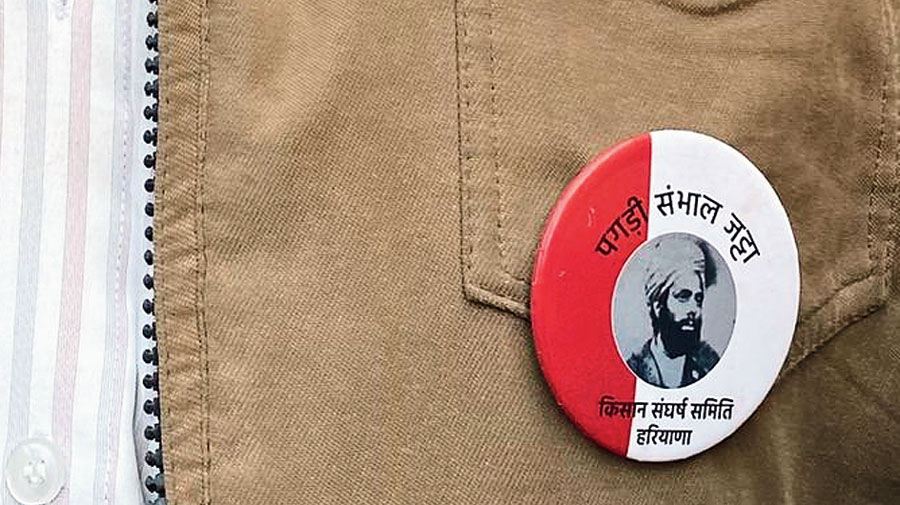 A member of the Kisan Sangharsh Samiti, Haryana, at the Delhi-Haryana Tikri Kalan border sports a badge with an image of Sardar Ajit Singh.
Telegraph picture

The song was first sung at a 1907 rally in Lyallpur, today called Faisalabad in Pakistan’s Punjab province, by Ajit Singh, Bhagat Singh’s father and All India Congress Committee member Kishan Singh, Ghasita Ram and Sufi Amba Prasad. The previous year they had founded a secret organisation that was alternatively called Bharat Mata Society and Mehboob-e-Watan, to spark a nationwide revolution for freedom on the 50th anniversary of the 1857 War of Independence. A lukewarm response to his plans from Indian princes, only strengthened Ajit Singh’s resolve that the revolution if any would come from the peasantry who had nothing more to lose.

Amandeep Sandhu told The Telegraph: “In many ways, the current protests are similar to Paghri Sambhal Jatta, a call to arms in 1907 when the British developed the Punjab Canal colonies to feed the British Empire and its troops from Punjab. That time the British needed to assert themselves after the fall of Maharaja Ranjit Singh and control the borders that touched the Tsarist Russian Empire.”

He added: “Protests work either if they appeal to the conscience of the oppressor, like the non-violent freedom movement, or if they cut off the lifeline of the oppressor — which in this case was the army’s recruitment from the Majha region of Punjab where the movement took place in Lyallpur in 1907…. The British panicked and repealed the laws.”

Ajit Singh and Lala Lajpat Rai were sent to prison in Mandalay for the protests. After his release in 1909, Ajit Singh lived in exile in Iran, Europe and Latin America, collaborating with Netaji Subhas Chandra Bose in Italy during the Second World War. Ajit Singh returned to India shortly before Independence and died on August 15, 1947, in Dalhousie.

Sandhu said: “The farmers are looking at the (the new farm) laws as the next land colonisation by crony capitalists. This time the State is not sorting the mechanism of food production and distribution, it is merely selling the system to crony capitalists who will decide what you grow, and for how much, and throw out the weakest farmers from the business — much like the labour mandis when an employer chooses the fittest-looking mason or plumber and leaves the rest without work…

“Socialist ideology of the Left, and the ideals of equality and socialism of the Gurmukhi have brought farmers together this time, as they did during Ajit Singh’s movement and the Ghadr Movement…. It is being called a hondh ki ladai or battle for one’s existence.”

One of the unions that uses Ajit Singh’s image as its logo is the Kisan Sangharsh Samiti based in Haryana’s Fatehabad. Its president Labh Singh — now protesting at Tikri Kalan on the edge of Delhi — told this newspaper: “Ajit Singh’s movement never died. It was always alive in our memories…. The need of the hour has resurrected it to this instance.…

“In 1907, soldiers had joined peasants. This time, we estimate that we have 32,000 ex-servicemen in our ranks who have contributed their annual pensions for the struggle as these laws will break our back that is already strained by the high input costs.”

In his book Sandhu says that after 200 Sikh soldiers attended a meeting in Multan in 1907, soldiers at many places refused to fire at peasant rallies.

Patiala-based academic and author of several books on Bhagat Singh, Chaman Lal, recalled that Banke Dyal, whose song is resonating today, had lost his job as a sub-inspector in Punjab police for his nationalist leanings.

Lal explained that the biggest similarity between 1907 and today was rural indebtedness. “In 1907, farmers were not killing themselves under the burden of debt in the numbers that they are today. They also were not as unionised as they are in contemporary Punjab…. The invoking of Ajit Singh is credit to the influence of the Left on the peasants’ movement…. From their experiences of the past, the Punjabi peasantry realises that the State cannot be resisted with arms, but only with peaceful protest.”