'India has many languages and every language has its importance. But it is absolutely necessary that the entire country should have one language that becomes India's identity globally,' Shah said 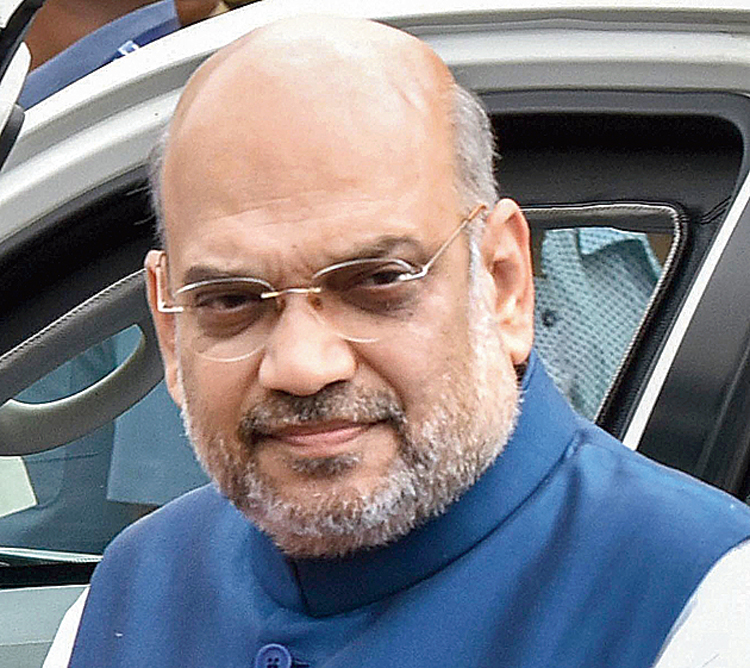 Home minister Amit Shah on Saturday invoked Mahatma Gandhi and Sardar Patel while backing the idea that Hindi should be the identifying language of India, but researchers have a different view of the matter.

'India has many languages and every language has its importance. But it is absolutely necessary that the entire country should have one language that becomes India's identity globally,' Shah said in a series of tweets in Hindi.

'I want to appeal to people to promote their native languages but also use Hindi to make the dream of Bapu (Mahatma Gandhi) and Sardar (Vallabhbhai) Patel of one language come true,' he tweeted.

But did Gandhi and Patel seek a national language and choose Hindi?

Among scholars, the opinion is that Gandhi kept changing his position. Also, after 1942, Gandhi seemed to stress on the adoption of Hindustani, a fusion of Hindi and Urdu, not Hindi, as the unifying language of the masses.

On Patel there is no clarity on what he wanted.

Asha Sarangi, a professor of political science in Jawaharlal Nehru University, said it would be 'absolutely wrong' to say that Gandhi wanted Hindi as the national language. 'Gandhi, in fact, wanted to secularise the language and emphasised on Hindustani,” she said. Sarangi has written on the linguistic identity formation of colonial north India and the language and politics here.

“Gandhi was indeed in favour of linguistic unification. He believed that one language would keep the country together and unified,” said Ganpat Teli, who teaches Hindi at Jamia Millia Islamia. He has researched on Gandhi and language nationalism during India’s Independence movement.

Teli wrote in Gandhi and his Hindustani: 'This is a general notion that Gandhi was in favour of the colloquial form of language. In his first Indore speech in 1918 he said, 'I have often said that Hindi is that language which is spoken in the North by both Hindus and Muslims and which is written either in the Nagari or the Persian script. This Hindi is neither too Sanskritized nor too Persianized. The sweetness which I find in the village Hindi is found neither in the speech of Muslims of Lucknow nor in that of the Hindu pandits of Prayag. The language which is easily understood by the masses is the best. All can easily follow the village Hindi',” (Gandhi 1956: 9-10).

Gandhi was against English, which he saw as the language of administrators, but found it necessary to have a common medium. But he was also ambiguous and vague, American historian David Lelyveld said, about what language other than English he might have preferred.

Gandhi’s argument of linguistic unification was based on numbers. He thought since more people spoke Hindi than any other language, the rest should learn it too.

The Committee of Parliament on Official Language writes on its website that Gandhi, in his address to the Gujarat Education Conference in Bharuch in 1917, had “stressed the need of a national language and expressed that Hindi is the only language which could be adopted as national language because this is a language spoken by majority of the Indians”.

While chairing the Hindi Sahitya Sammelan in Indore in 1918, he said: “I have often said that Hindi is that language which is spoken in the North by both Hindus and Muslims and which is written either in the Nagari or the Persian script.”

The same year, Gandhi established Dakshina Bharat Hindi Prachar Sabha and told Kannada speakers to learn Hindi. “Have you not energy enough to devote to a study of Hindi four hours each day for just one month? Do you think it is too much to devote this time to cultivate a contact with 200 million of your own countrymen?” D.G. Tendulkar documented in his eight-volume biography of Mahatma Gandhi, called Mahatma.

Gandhi remained with the Sammelan until the mid-1940s but started drifting away from this position on Hindi by 1942, when the he started stressing on the use of Hindustani. He resigned from the Sammelan in 1945.

“In Gandhi’s speeches and writing you’ll find contradictory views. His stress on Hindi-Hindustani was also to portray a linguistic unity between Hindus and Muslims,” Teli said. “But as far as the issue of one unifying language was concerned, Gandhi stuck to that.”

“Gandhi was also extremely careful and kept arguing that rather than getting into Hindisation or Urduisation of the north, he wanted something like Hindustani. It was dream that was never fulfilled,” Sarangi said.

According to her: “His conversations show that he had doubts and was ambivalent because he didn’t want to isolate himself from this nationalist camp which was actually in favour of Hindi, like [Purushottam Das] Tandon, Sampurnanand and Patel.... He knew language was a volatile subject. I’d say he kept changing his position.”

Sarangi mentioned how Maulana Azad got angry with Gandhi when the latter suggested Hindi means Hindustani. “That’s when Maulana told Gandhiji that you’re actually promoting Hindi. This correspondence during the 1930s between the two ended with both getting angry at each other,” she said.

In a letter to C. Rajagopalachari dated March 5, 1946, Gandhi wrote, “I must write this in what has become as good as your mother tongue. I have written to you more than once in Hindustani... I have developed a dislike for writing to an Indian in any but the national language.”

Both the professors, however, acknowledged that there isn’t much about Patel’s views on language that can point to whether he was in favour of Hindi as a national language.

The Constituent Assembly, which had B.R. Ambedkar, Jawaharlal Nehru, Patel and Azad, reached a conclusion to select one language as the common official language of the Union. “The official language of the State shall be Hindi and until India becomes fit for this purpose English. Will Indians accept this?” Ambedkar had wondered. “One language can unite people. Two languages are sure to divide people. This is an inexorable law. Culture is conserved by language. Since Indians wish to unite and develop a common culture it is the bounden duty of all Indians to own up Hindi as their language.”