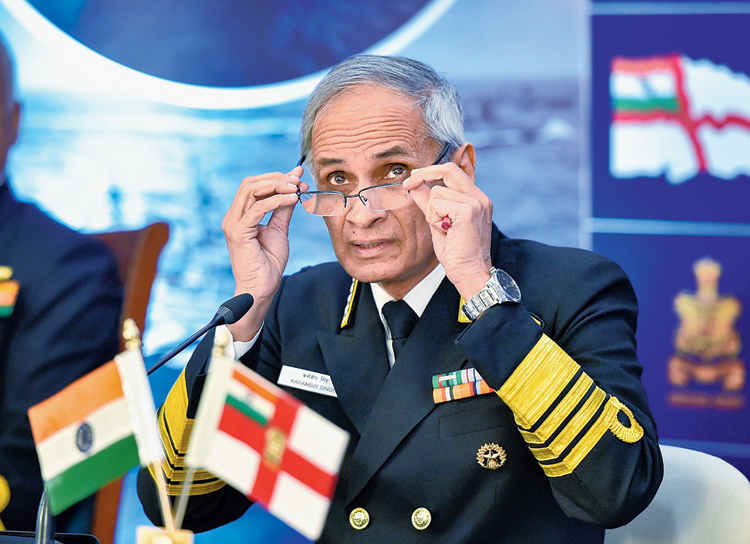 India is keenly keeping track of China’s increasing presence in the Indian Ocean, navy chief Admiral Karambir Singh said on Tuesday, asserting that the force was fully prepared and equipped to deal with a national security challenge.

Despite the bonhomie between Prime Minister Narendra Modi and Chinese President Xi Jinping, India has not invited China to a multi-nation exercise scheduled next year.

Replying to a question why China had not been invited to the exercise scheduled to be held in March 2020, Admiral Singh said only “like-minded” countries would be part of the Milan drill for which the Indian Navy has invited 41 countries.

“There is no interoperability with the PLA (Chinese People’s Liberation Army) navy. We haven’t even done a passage exercise with the Chinese navy. With the other countries, we have better interoperability,” Admiral Singh said.

Interoperability is the ability of military equipment or groups to operate in conjunction with each other.

Addressing a media conference ahead of Navy Day on December 4, Admiral Singh said a Chinese research vessel was recently driven away from Indian waters near the Andaman and Nicobar Islands as it did not have permission to operate there.

“Our stand is very clear…. If you have to do anything in our exclusive economic zone, you have to notify the Indian Navy and take permission,” he said.

The navy chief said seven to eight Chinese ships were usually present at any given time in the Indian Ocean region either for scientific research or anti-piracy missions.

Sources in the defence ministry said Chinese naval ships had been regularly entering the Indian Ocean since 2013 and had been deploying submarines for anti-piracy operations.

“India is worried over China’s influence in the Indian Ocean region and the PLA navy is taking an assertive stance in the South China Sea and is challenging India’s domination in the region. There is a threat from Chinese submarines in the Indian Ocean even though they claim it is for anti-piracy. We are regularly carrying out threat assessment of the PLA’s submarines,” a defence ministry official told The Telegraph.

In December last year the Centre had given the go-ahead to the Indian Navy to induct 56 warships and submarines over the next 10 years to enhance the force’s maritime capability, a move, sources said, was aimed at countering China’s growing influence in the Indo-Pacific region.

The warships and submarines, the sources said, will enable the navy to protect sea lanes of communication in the Persian Gulf and monitor Chinese activities in the Bay of Bengal.

Admiral Singh said India was playing a stabilising role in the Indo-Pacific region.

Admiral Singh highlighted that the navy’s annual budget allocation had come down from 18 per cent to 12 per cent in the past five years and it needed more funds for pursuing its modernisation programme. “The share of the navy in the defence budget has consistently decreased from 18 per cent in 2012-2013 to 13 per cent this year,” he said.

On the challenges in the neighbourhood, Admiral Singh said no action of any other player in the region should impact India. “We are ready to work with like-minded nations in the region,” he said.