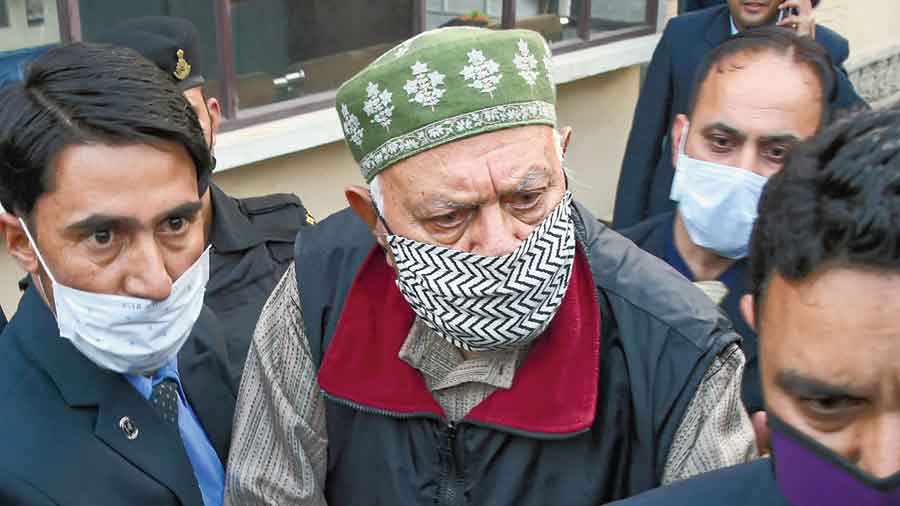 Former Jammu and Kashmir chief minister Farooq Abdullah was questioned on Monday by the Enforcement Directorate in connection with the 2012 cricket scam, kicking up a political storm as parties called it a vendetta against the formation of an alliance to fight for the restoration of Article 370.

Abdullah, the National Conference president and Srinagar Lok Sabha MP, was summoned and questioned from 11am by ED officials at its Srinagar office in connection with his alleged role in the Rs 113-crore Jammu and Kashmir Cricket Association scam that had rocked the state in 2012.

Abdullah, after daylong grilling, vowed not to give up his struggle for the restoration of Article 370, although he refused to link his questioning with the recent developments.

The former chief minister’s questioning triggered an outcry as the NC, the People’s Democratic Party, the Peoples Conference and other parties called it a political vendetta. These parties floated the People’s Alliance last week to fight for restoration of Article 370 and resolution of the Kashmir issue.

The NC, in a statement, said: “We knew it was coming” and claimed the BJP has unleashed the agencies after failing to politically fight Abdullah. “The ED summon to Dr Farooq Abdullah is clearly the result of the unity that Dr (Farooq) Sahib has been able to forge among mainstream political parties in J&K,” the statement said.

“This is the price one faces when opposed to BJP’s ideology and divisive politics. Recent history is a witness to how BJP has been employing coercive and intimidative measures through various departments to target Opposition leaders across the country. The recent ED summon to Dr Farooq Abdullah is a case in point.”

An NC spokesman said the “timing of the recent summon is very clear” as his “previous summons were just before August 5 last year and today’s summon comes within days of forming the People’s Alliance for Gupkar Declaration of which Dr Farooq Abdullah has taken a lead”.

“Dr Farooq Abdullah continues to maintain his innocence and will cooperate with the authorities in what is nothing but a witch-hunt,” he said.

The Gupkar Declaration, signed by major J&K political parties, is a pledge for restoration of the state’s special status.

Abdullah’s son Omar condemned the summons but denied some media reports that the raids were conducted at his residence.

Former chief minister and PDP president Mehbooba Mufti also took to Twitter to censure the central government and vowed to fight on.

“ED’s sudden summon to Farooq sahab displays the extent of GOIs nervousness about mainstream parties in J&K fighting as one unit. Also reeks of political vendetta & wont in the least blunt our collective resolve to fight for our rights,” she tweeted.

The scam surfaced in 2012 over allegations of misappropriation of funds to the tune of Rs 113 crore in the JKCA, then headed by Abdullah. The money was sent by the BCCI to the JKCA.

Jammu and Kashmir High Court officially handed over the case to the CBI in September 2015 and the ED too chipped in with the filing of an FIR. The ED actions have in the past coincided with major political developments, raising eyebrows.

The ED filed a chargesheet in July last year against Abdullah and three others for allegedly misappropriating Rs 43 crore, amid unprecedented uncertainty ahead of the August 5 abrogation of Article 370. Abdullah then claimed he had done no wrong and was open to investigations.

BJP spokesman and former Brigadier Anil Gupta rejected the claims and said the party has nothing to do with the ED investigations. He said the timing of investigation is decided by the agencies, which are “autonomous”, and not by the BJP.

“Blaming the BJP for all their woes has become a political compulsion for the National Conference. Dr Farooq Abdullah did not consult the BJP when it created the scam. At that time he used both hands to muster the money and today when he is being questioned for that he is blaming the BJP and its ideology,” he said.

“The case was already going on. The timing of the investigation, when they want to investigate or question, is decided by the agency. They are not BJP agencies, they are agencies of the government of India. They ate autonomous bodies.”